#CodeRed: B.C. is the worst performing economy in Canada for younger generations
We keep hearing great things about the B.C. economy, so we wrangled Stats Can to find out: Growth for WHAT? WHO is actually making bank in B.C.'s economy?

WHO is actually benefiting from B.C.’s inflated real estate economy?

Another election is fast approaching in B.C. and since many citizens will cast their ballot for the party they believe will best steward the provincial economy, Generation Squeeze has prepared a new study to showcase the performance of the B.C. economy relative to other provinces and over time.

Our study gives priority to how the economy performs for younger generations under age 45. As much as possible, we explore data that go back to 1976, and examine trends over the terms in office of the BC Liberals (since 2001), BC NDP (1991–2001), and the British Columbia Social Credit governments (prior to 1991).

The results are clear and concerning. They show that B.C. is now the worst performing economy in Canada for younger generations.

At first glance, this finding may surprise some. Canadian governments often judge the success of provincial and national economies by reference to economic growth rates, employment trends and government debt levels. The data we report below will show that B.C. is currently performing reasonably well by comparison with most provinces according to these metrics—although often slightly poorer by comparison with previous B.C. governments.

In this study, however, we show that growth rates and public debt levels provide incomplete, and sometimes distracting, signals about the success of an economy, especially when rising real estate prices are a key driver of these trends. We dig deeper to examine the actual incomes that British Columbians earn, our costs of living, personal debt levels, etc. When we turn our attention to these indicators, the data clearly reveal that the standard of living has deteriorated more dramatically for younger people in B.C. in recent years than anywhere else in the country. For example, we find:

Good-paying jobs are harder to secure: full-time earnings have fallen more in B.C. than any other province since 1976–80. It’s particularly bad for residents age 25–44 who now earn $8,000 to $10,000 less (after inflation). Young residents have lost $1,200 from their pre-tax earnings since Premier Christy Clark took office.

Home-ownership is much harder to obtain: B.C. has lost control of home prices more than any province. It took five years of full-time work to save a 20 per cent down-payment on an average home in 1976–80. It took eight years when the B.C. Liberals came to power in 2001. Now it takes 19 years. 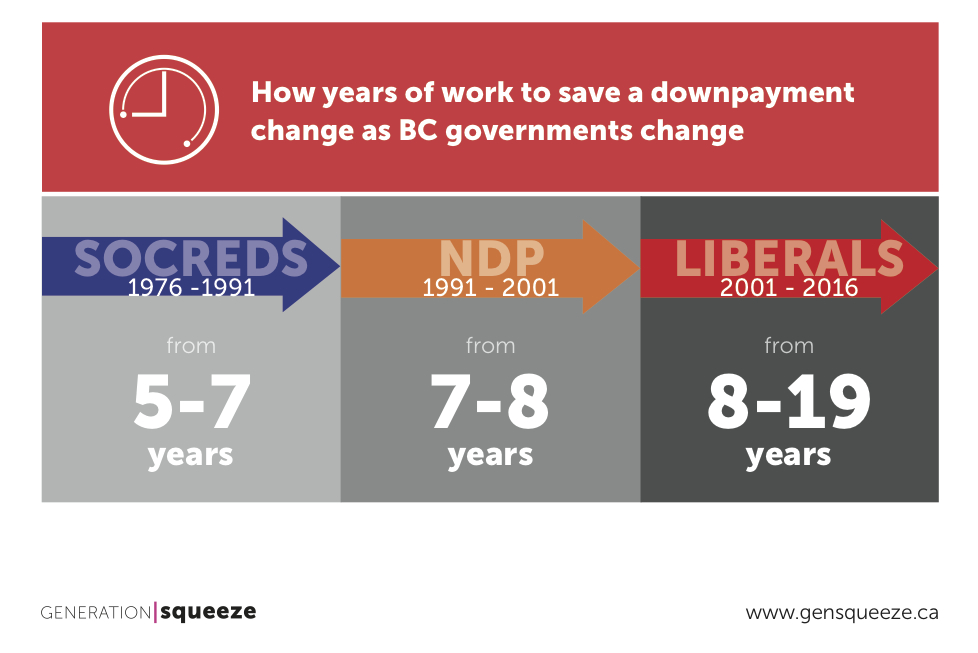 B.C. policy makers waited a long time to acknowledge the urgency with which we must adapt policy to protect the link between home prices and earnings. While some of the housing policy changes made in recent months are a step in the right direction (e.g. the 15 per cent foreign buyers tax, and investment in the supply of rental homes), other changes like the interest-free loans for first-time homebuyers are well-intentioned, but badly executed.

Young residents can’t keep as much of their hard-earned money: Hard work pays off less for young citizens in B.C. than in any other province. Compared to other parts of Canada, we now have to work years more to save a down payment; months more each year to pay the mortgage on an average-priced home; and rents require more work from us as well.

Whether in Prince George, Kamloops, Kelowna, Victoria, or all the suburbs around Vancouver and beyond, hard work pays off less for young British Columbians than it used to. In fact, just since 2001, the data show that typical younger British Columbians have lost an entire decade of hard work when measured by the amount of work required to save for a down payment on an average-priced home. MSP tax cuts of up to $450 a person announced in the 2017 provincial budget cannot compensate, and interest-free loans for first-time homebuyers unintentionally exacerbate the root causes of the problem.

Debt is up: When measured as a share of our economy, the B.C. government debt is smaller than that of most provinces, and has declined somewhat over the last 15 years. However, when measured per person, the B.C. debt is slightly higher today than in 2001.

The provincial government’s approach to managing its fiscal balance-sheet and the economy has imposed alarming amounts of personal debt on younger British Columbians compared to the national average. In addition to high home costs, young people’s personal debt is growing because post secondary tuition increased more in B.C. than in any other province since the BC Liberals took office, and childcare now costs double university tuition.

B.C. has been an environmental leader by launching the first carbon tax in the country in 2008. Still, three other provinces have better greenhouse gas footprints than B.C., and our province has made no progress reducing our footprint since Christy Clark became premier. This leaves a large environmental debt for younger residents with emissions in B.C still around 10 times higher than what is sustainable for the coming decades.

Highest rates of early childhood vulnerability: Since hard work pays off less for residents in our 20s, 30s and early 40s in B.C. than elsewhere in Canada, the provincial economy is squeezing the generations in their prime childbearing and rearing years for time, money, services and a sustainable environment. When the economy squeezes the generations raising young children, it risks squeezing the kids that they raise. It is therefore not surprising that B.C. is home to the highest rates of early childhood vulnerability in the country. This means a greater portion of our children are at risk to fail, go to jail and wind up sick as adults.

When decision-makers point with pride to B.C.’s relatively high rates of economic growth and job creation by comparison with other provinces, Generation Squeeze encourages all British Columbians to step back and consider two things.

The first is the historical context for the claims being made about current growth and employment numbers. The annual rate of economic growth under the BC Liberals (2001 onward) is slightly lower than the annual rate of economic growth when the BC NDP were in office (1991–2001). Unemployment also fell more for younger citizens between 1991 and 2001, than it has since 2001. Both the BC Liberal and BC NDP governments outperformed the British Columbia Social Credit governments (prior to 1991) on economic growth and unemployment.

The second is that gross domestic product (GDP) and employment indicators are insufficient metrics to evaluate the performance of the B.C. economy. It is time we asked instead: what kind of growth are we achieving? Growth that compromises the standard of living for British Columbians in our 20s, 30s and 40s, along with our children, is clearly not an adequate measure of the success of our economy. At bottom, we should judge an economy over time in terms of whether it requires more, or less, work from citizens  to cover our major costs of living, and whether it is sustainable. In these regards, the growth that B.C. has reported of late has failed its younger citizens. 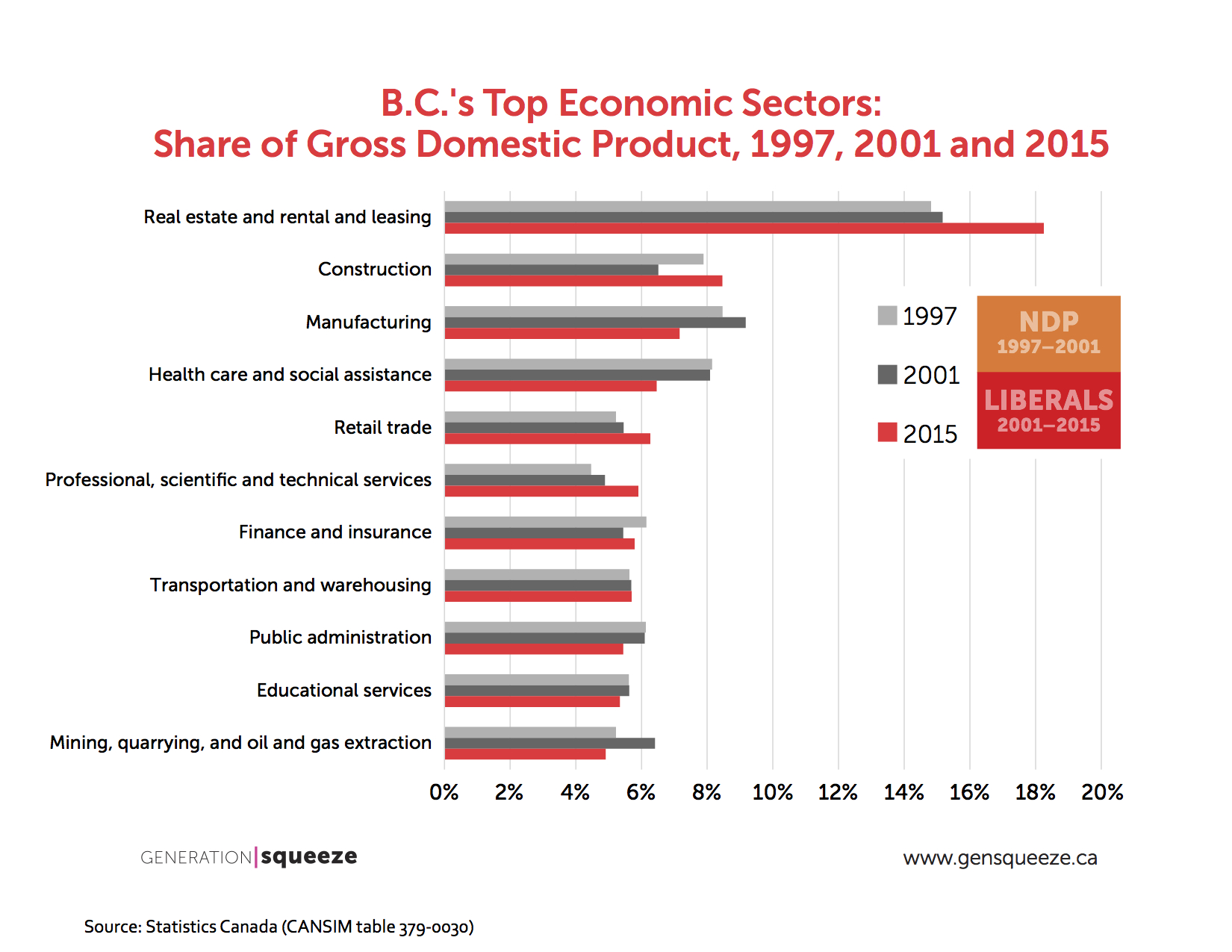 What citizens do with this information when deciding how to cast their ballot in the next election is a personal choice. Generation Squeeze does not recommend or endorse any political party. We simply present data to help citizens become better-informed when making political decisions. We also encourage citizens to urge all political parties to integrate into their election platforms the following 10 policy principles to recalibrate the economy to work for all generations.

The principles for housing policy reform (numbers two through nine) were shaped in collaboration with experts throughout the housing ecosystem, including developers, realtors, landlords, non-profit housing organizations, city planners, municipal mayors, academics, renters, home-owners and others. Much of this consultation took place at the “Building Housing Common Ground” event hosted by Generation Squeeze on October 25, 2016.

We describe these principles in the full report, because we believe governments must start with clear first principles in order to ease the squeeze on younger Canadians in our cities, provinces and country. As we consider the policy adaptations motivated by these principles, we know that specific policy adjustments may be needed to address the particularities of communities and regions, and may evolve over time as circumstances change or new research evidence becomes available.

Generation Squeeze invites those motivated by a vision of B.C. and Canada that works for all generations to join us in endorsing and promoting these policy principles.

With respect to the upcoming 2017 B.C. election, after the release of this report we will prepare a short briefing for parties summarizing the policy commitments that we recommend for all party platforms.

As we approach voting day, we will refer to that summary in order to interpret and assess the party platforms for the Generation Squeeze network.

Suit Up, Spread Out and Squeeze Back with us, because we know that politics responds to those who organize and show up.