"We are the 99%" overlooks generational decline
By Ryan Vande

Canada’s economy more than doubled in size since 1976.  Because many aren’t feeling better off, the Occupy slogan captured attention a year ago.  “We are the 99%” reminds us that the richest one per cent of Canadians make 14 percent of total income, and absorbed more than a third of income growth in the last 15 years.  It helps to explain where all the additional wealth went.

But the slogan is incomplete.  The change in prosperity is also generational.

On average, Canadians who got in the housing market by the mid 70s (those who are newly retired, or retiring soon) have been big winners.  Compared to 55-64 year olds in the mid-70s, they enjoy wealth that has risen by around 200 per cent, in large part because housing values have increased dramatically over their adult lives. 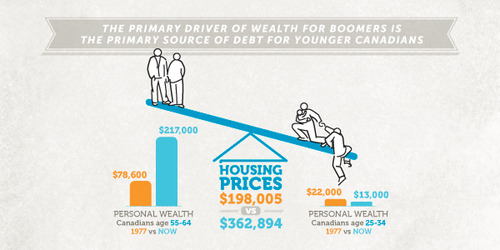 But what’s been good for a generation heading into retirement has been bad for their kids and grandkids.  The typical 25-34 year old working full-time today must save for 10 years to put away a 20 per cent down payment for housing in an average school district.  That’s twice as long as was required for the typical young worker a generation ago, even though today’s down payment often purchases a smaller yard, a Condo, or requires a longer commute.

Young people’s wages are losing ground, despite the fact they have more post-secondary education than previous generations.   After adjusting for inflation, two young people still bring home little more than what one breadwinner often did in the mid-1970s.  The result?  Generations under age 45 are squeezed.  Squeezed for time at home.  Squeezed for money, because they pay higher student debts and housing prices with lower wages.  And when they choose to have kids, they are squeezed for child care services, which remain in short supply, and often cost the equivalent of another mortgage.

The slogan “We are the 99%” sheds no light on this generational squeeze, unless it is accompanied by a commitment from Boomers and seniors to help their kids and grandkids champion a better policy deal.

Championing social policy for generations facing tough times is a big part of Canada’s legacy.   Remember that in the mid-70s, 30 per cent of seniors were poor in our country – seniors like my grandmother, who today is 96.  Because Canada has a proud history of building and adapting pension and medical care policy to our changing socioeconomic circumstances, we have since wrestled down the poverty rate among seniors to around 5 per cent –lower than rates for any other age group in the country.

It is in large part because of this policy legacy that my grandmother is not poor today!  And it is also why my parents, in-laws, aunts and uncles have a far reduced risk of economic insecurity compared to those approaching retirement a generation ago.

We need to sustain these previous achievements, but it is also time to adapt policy again for a generation facing deep declines in their standard of living.  Problem is, markets for wages and housing are difficult to influence.  Policy can create minimum wages, and some social housing.  Although important, they do little to help the typical 38 year old today who has debt that is more than 100 per cent of household income because of housing and tuition costs.  A generation ago, the norm was around 40 per cent.

So we must look to other policy mechanisms that will reduce time and income pressures as younger Canadians start jobs, careers and homes.  There are solutions (see blogs.ubc.ca/newdealforfamilies).  Better benefits for new moms and new dads would ensure that it doesn’t cost younger generations the equivalent of a second mortgage when parents split time at home before a child is 18 months.  $10/day child care would mean parents don’t pay another mortgage for services on which they rely to have enough employment time to keep up with the rising cost of living.  And since the 2012 federal budget now asks younger Canadians to work longer lives before claiming Old Age Security, changes to employment practices would free workers to have an extra few hours a week at home each year before they retire.

These concrete solutions to the generational decline merit more attention as Canadians aspire for a fairer distribution of our national prosperity.

A full service digital creative agency that's all about working with the people and organizations that protect our planet and make the world a better place.
Uncategorized
"We are the 99%" overlooks generational decline
"We are the 99%" overlooks generational decline
Check out Generation Squeeze. I just joined.
Read the blog at Generation Squeeze
Latest News & Resources (archive)