BC needs a goal to finally end the housing crisis
BC’s current political parties have promised all sorts of action to make housing more affordable, but they’ve never set a clear end goal.

Set a clear goal. Come up with a plan. Execute. Kind of a standard way to make progress on an issue you want to solve, yeah?

Sometimes our governments do this pretty well. Other times, not so much. Sadly, that’s the case when it comes to housing affordability.

We’ve been living through an escalating housing crisis in BC for more than a decade, with the last five years being especially tough.

Some important measures have helped cool costs, including a little bit in 2019.1 But guess what? Housing costs are now climbing again – shrugging off a global pandemic – and reaching crushing new heights in some places.2

Why? Lots of reasons. But here’s a big one: while BC’s current political parties have promised all sorts of action to make housing more affordable – including the current government’s 30-point plan – they’ve never set a clear end goal.3

I’m talking about a goal that sets out for whom housing is to be made more affordable, and by how much, and by when.

A goal like this: “Within ten years, everyone living in BC can afford a home that meets their needs, as renters or owners.”

This is already the goal of Canada’s national housing agency (CMHC), and it’s awesome because:

If BC’s next government was committed to this goal it would allow us to hold them accountable to real progress on housing affordability. No more pretending that average housing costs holding steady where they are or going even further out of reach of local incomes is OK.

Without a clear end goal, action on housing risks being uncoordinated, insufficient and counterproductive, which is what we told the province during its most recent consultation on housing affordability.

During the 2020 provincial election election, we asked BC’s parties to go beyond half-measures and be clear with voters about what it is they are ultimately trying to achieve on housing, and by what date. While the BC Greens committed to the goal in their platform (👏), the current government has not committed to achieving the goal. There's more work to do, but with the help of the Gen Squeeze community we'll keep fighting for an affordable future for BC.

1 - Including the expanded foreign buyers’ tax and speculation and vacancy tax that act to cool demand from global capital and investor buyers.

2 - The following graph gets the basic point across: prices are rising again, in some places reaching record highs. 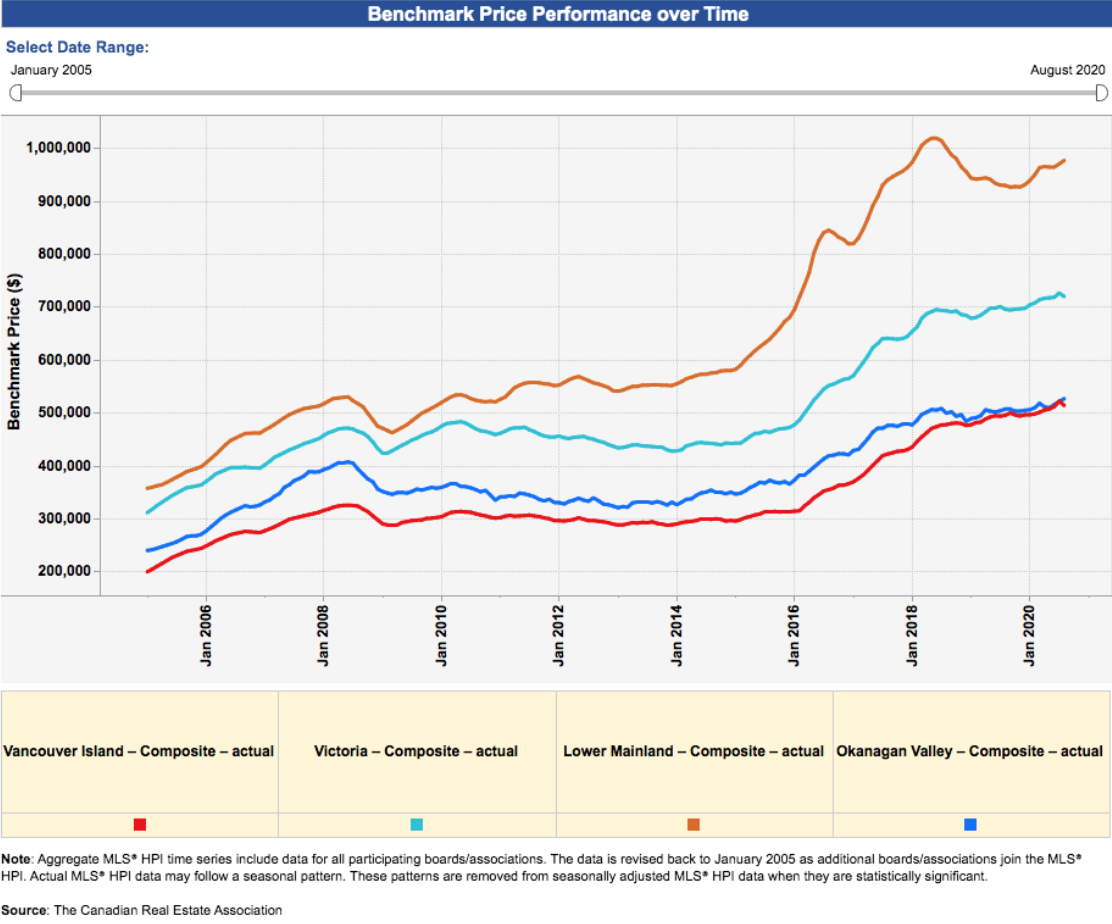 3 – For example, the BC NDP’s 2018 30-point plan on housing affordability starts with an acknowledgement that housing costs have left local incomes behind, but doesn’t set a goal of actually bringing costs back within reach of those incomes. Instead, the plan commits to a range of individual policies and sub-goals (including the building 114,000 homes). Meanwhile, the BC Green Party’s 2017 election platform committed to 19 separate actions on housing but no clear end goal (beyond a general desire to “cool the market for residential real estate”), and while the previous BC Liberal government’s last Speech from the Throne stated that “your government’s singular goal is to ensure housing is affordable for British Columbians,” there was no timeline associated with that or any clarity about how that would be measured.

4 - E.g. by supplementing it with two new “Housing Hardship” measures that have been developed by CMHC partially for this purpose, and/or with additional metrics that better track experiences of middle income residents and barriers to homeownership.