We’re thrilled to celebrate a 2018 B.C. budget that takes an aggressive new approach to housing, and the beginnings of universal child care in B.C.

These are big wins! Congratulations to everyone who donated their time, money, and energy, whether through Gen Squeeze, other organizations, or individually.

We’ve been pushing for affordable, accessible, quality child care since our inception, and for housing reform since co-hosting the #DontHave1Million rally in Vancouver and launching our #CodeRed campaign in 2016.

Sure, there’s plenty of room for improvement in B.C.’s latest budget, but it’s a fresh, welcome start to tackling an affordability crisis that’s been squeezing younger residents for far too long.

The budget delivers on nearly everything we were looking for in the first years of $10aDay plan implementation:

While the budget proposes new investments in postsecondary training for child care providers, it’s short on details about the plan to raise wages for early childhood educators to be on par with school teachers. Read our full analysis, or read the government backgrounder.

"People, including many non-resident investors, are speculating in B.C.'s housing market, using our housing stock as an investment vehicle that drives up prices and removes rental stock. We are taking immediate action to crack down on speculators who distort our market."


In 2017 British Columbians voted for a change in government largely in response to the escalating housing and affordability crisis. For many, life has become devastatingly unaffordable, with B.C. having the worst performing economy in Canada for younger residents. Leading up to February 20, everyone was waiting with bated breath to see what this new government would do differently.

After delivering more than 2,000 signatures and 200 letters of support to B.C.'s new housing minister back in September, the new provincial government got down to business with a Throne Speech that reflected our policy principle of Homes First — a success in itself!

But when it came to details, the September budget update was essentially a ‘wait-for-February’ memo, so we had to keep the pressure up and the conversation going.

In November, we brought together housing sector leaders, local elected officials, and residents to discuss the impact of global capital/foreign investment in B.C. real estate, with a special focus on Greater Victoria where some local politicians had been resisting the 15 per cent foreign buyers tax.

These actions occurred in tandem with continuing discussions between Gen Squeeze, B.C. ministers, and MLAs in lead up to the February budget.

Want to dig into the B.C. budget even further?! Watch our live discussion event from February 20: B.C. Budget 2018: Where’s the Beef? 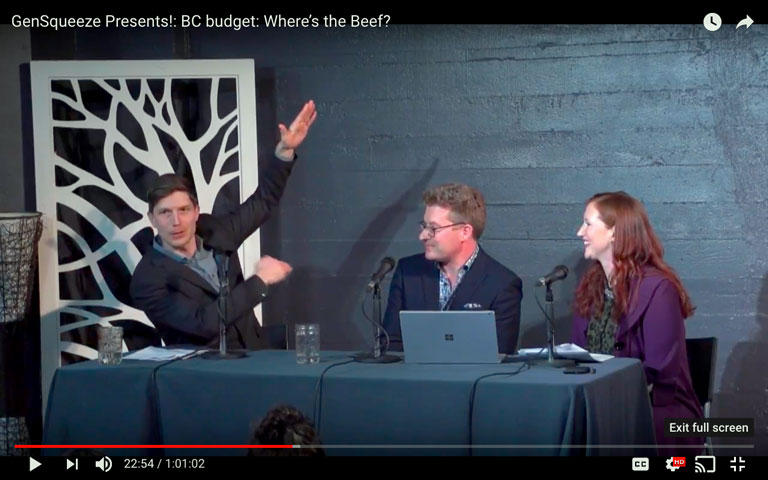 With the 2018 budget, B.C.’s government is taking bold steps to build a system of universal child care and to tackle housing costs that have risen out of control, but the work here is far from over.