New study breaks down platform numbers to encourage young voter turnout
We understand it’s hard to make meaning of political promises. For many, the differences between parties is as clear as the mud you find in a swamp. We can help.
By Ryan Vande

Elections BC data show that 40 per cent of 25-34 year olds voted in the 2013 BC election. So too did 49 per cent of 35-44 year olds. Turnout among younger British Columbians was well below that of residents over age 55 who cast a ballot in the last election at rates above 67 per cent.

One of the reasons young people offer to explain why they vote less often is that politicians don’t speak to their priorities or concerns. Others find it’s hard to make meaning of political promises. As a result, for some, the differences between parties is as clear as the mud you find in a swamp.

Generation Squeeze publishes “Swamplight: Making sense of the 2017 B.C. election platforms for voters under age 45” with one week left in the election campaign to address both of these concerns: http://www.gensqueeze.ca/bc_election_2017

The latest study from our non-partisan lab at the University of BC School of Population & Public Health uses data from the Government of BC 2017/18 budget, Statistics Canada and the Canadian Institute for Health Information to:

The Swamplight study finds the three parties are similar in their new social spending commitments to seniors, but there are big difference in terms of investments for younger generations.

The BC Liberals will spend approximately $600 more per person age 65+. The NDP will spend $750 more. The Greens will spend around $800 more.

Other findings from the new study include: 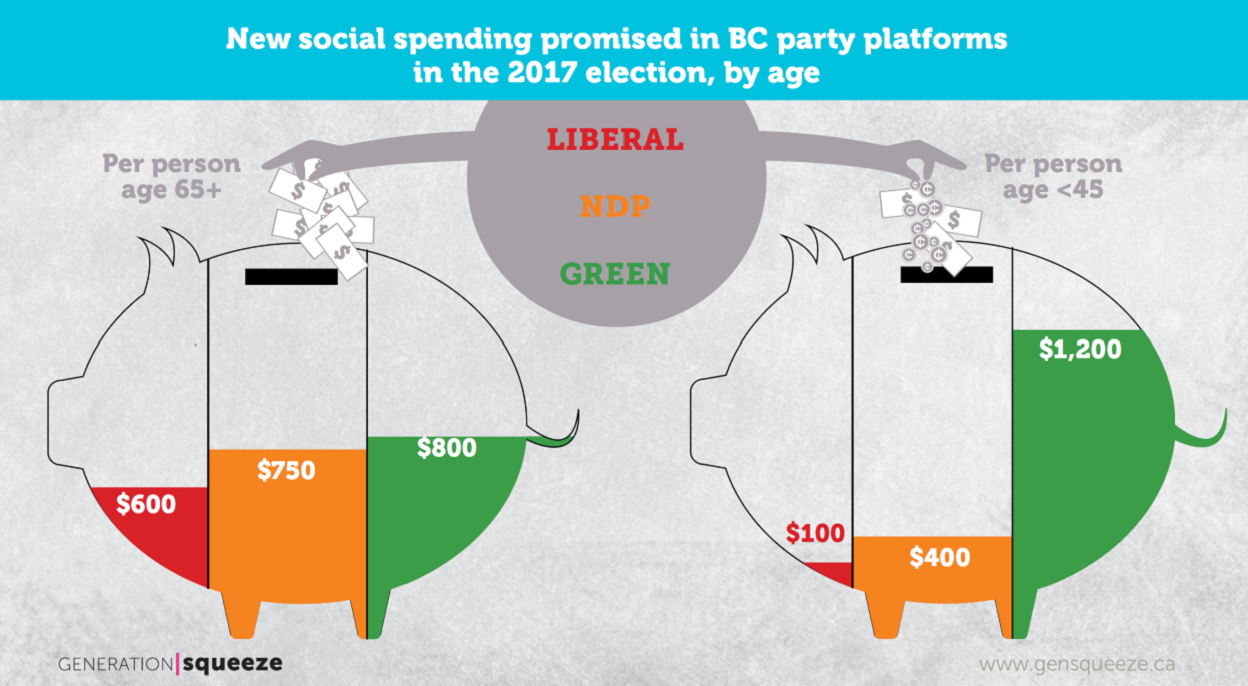 Generation Squeeze genuinely does not care who people vote for, so long as they vote, because politics responds to those who organize and show up. Since younger citizens have been less likely to cast a ballot on election day, this has resulted in political parties showing less urgency in the past to solve the big problems that face younger Canadians – including the fact that high home prices in BC have left behind young people’s earnings.

We provide this Swamplight analysis of the BC 2017 election platforms to help people be better informed about the similarities and differences between the parties, and hope this will help people feel more confident to cast a ballot on election day.

The full study is available at: http://www.gensqueeze.ca/bc_election_2017