#BCbudget2018: the short end of the stick for young people
Is the giant age gap in public spending purely natural, or does it also reflect a political and cultural reluctance to actually invest in young people?

Stop me if you’ve heard this one.

A politician tells everyone, “Young people are our future.”

Get it? It’s a funny joke. Because for the most part, young people's futures seem left out of government decision-making.

*gestures broadly at everything around*

Sorry, did that feel harsh? Well, consider the following:

The bottom line is Canadian governments don't invest equally in people of different ages. We call this difference in social spending the “age gap”, or the “generational spending gap.” 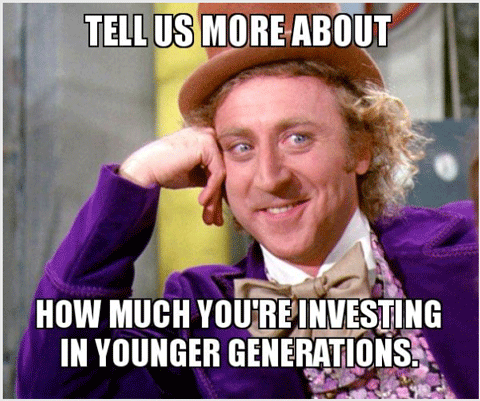 Last time we published data on combined government generational spending, here’s how the numbers broke down:

It’s only natural for governments to spend more on people as we age, right? Medicare, retirement security... that stuff adds up.

And young people do want governments to spend wisely and generously on our aging family members. We certainly don’t want anything taken away from our parents and grandparents.

So the question becomes, is the giant age gap in public spending purely natural…

… or does it also reflect a political and cultural reluctance to actually invest in young people?

We argue it’s the latter.

To know for sure, we first need our governments to start being transparent about the age distribution of public spending. We’re working on that part.

But until it happens, we’ll fill in. On Feb. 20 we’ll use our own rigorous methodology to show whether the BC NDP plan to invest fairly in the young and old alike.

For reference, here’s what the major parties were promising during the 2017 provincial election: 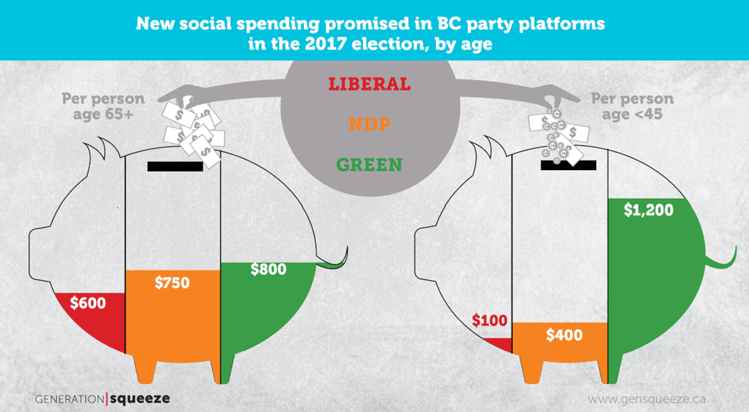 These figures were calculated using data from the B.C. 2017/18 budget, Statistics Canada, and the Canadian Institute for Health Information.

People like to complain about how if young people want their interests represented, they need to start voting. And yes, of course, point taken. We do need to get those voting rates up, and mobilize around critical issues between elections. Hence, why we founded Gen Squeeze (and why you should support our work by becoming a Member!).

But it would be a lot easier to motivate young people to get involved if politicians made the first move, and showed a willingness to design policy and investments that directly speak to our reality and needs. Beef up meaningful action on things like housing and child care, and more of us will start showing up.

When the new budget is released on Feb. 20, we’ll help you understand whether the BC NDP are coming through on their big ticket affordability promises, or whether they seem to be kicking the can further down the road. Join us at our Victoria B.C. event, B.C. Budget 2018: Where's the Beef? (which will be LIVE-STREAMED across the province!).

Do you have any questions about this topic, provincial budgets, or the upcoming B.C. budget? Leave a comment here, or send your question to [email protected]