When it comes to housing in Canada, the status-quo has created inequality and complacency.

Inequality, because rising housing prices lead to wealth windfalls for some while eroding affordability for others, which limits their chances to live up to their potential and enjoy life.

Complacency, because some homeowners reap wealth windfalls from skyrocketing prices without recognizing that their gains help to keep many others on the outside looking in.

It’s time for creative disruption to this status quo. It’s time to break Canada’s addiction to high and rising home values, by rebuilding our housing system around the concept of “Homes First. Investments Second.” 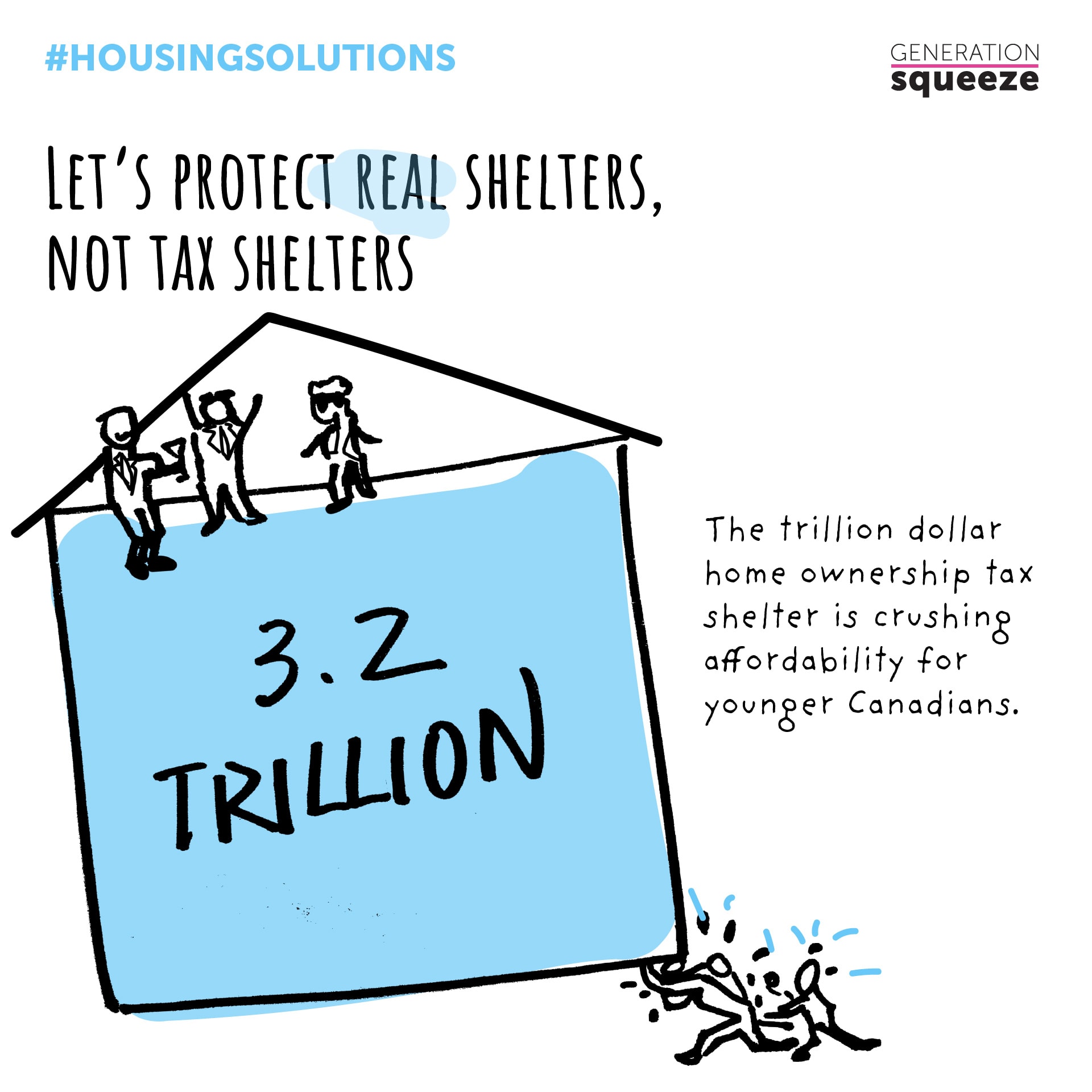 Key to this disruption is recognizing that the hard work Canadians do every day in their jobs is taxed more than the wealth homeowners gain from the rising value of their home while they sleep and watch TV. Currently, our tax system shelters from taxation the $3.2 trillion in added housing wealth homeowners have gained since 1977. It therefore incentivizes people to prioritize housing as a way to get rich, rather than a place to call home.

Just like offshore tax shelters motivate moving money out of Canada to preserve assets, the home ownership tax shelter motivates us to bank on rising home prices to gain wealth. Why do we consider the former a betrayal, but celebrate the latter?  A system that turns home ownership into an investment strategy is crushing affordability and harming younger and future generations. It’s time to protect real shelters, not tax shelters. 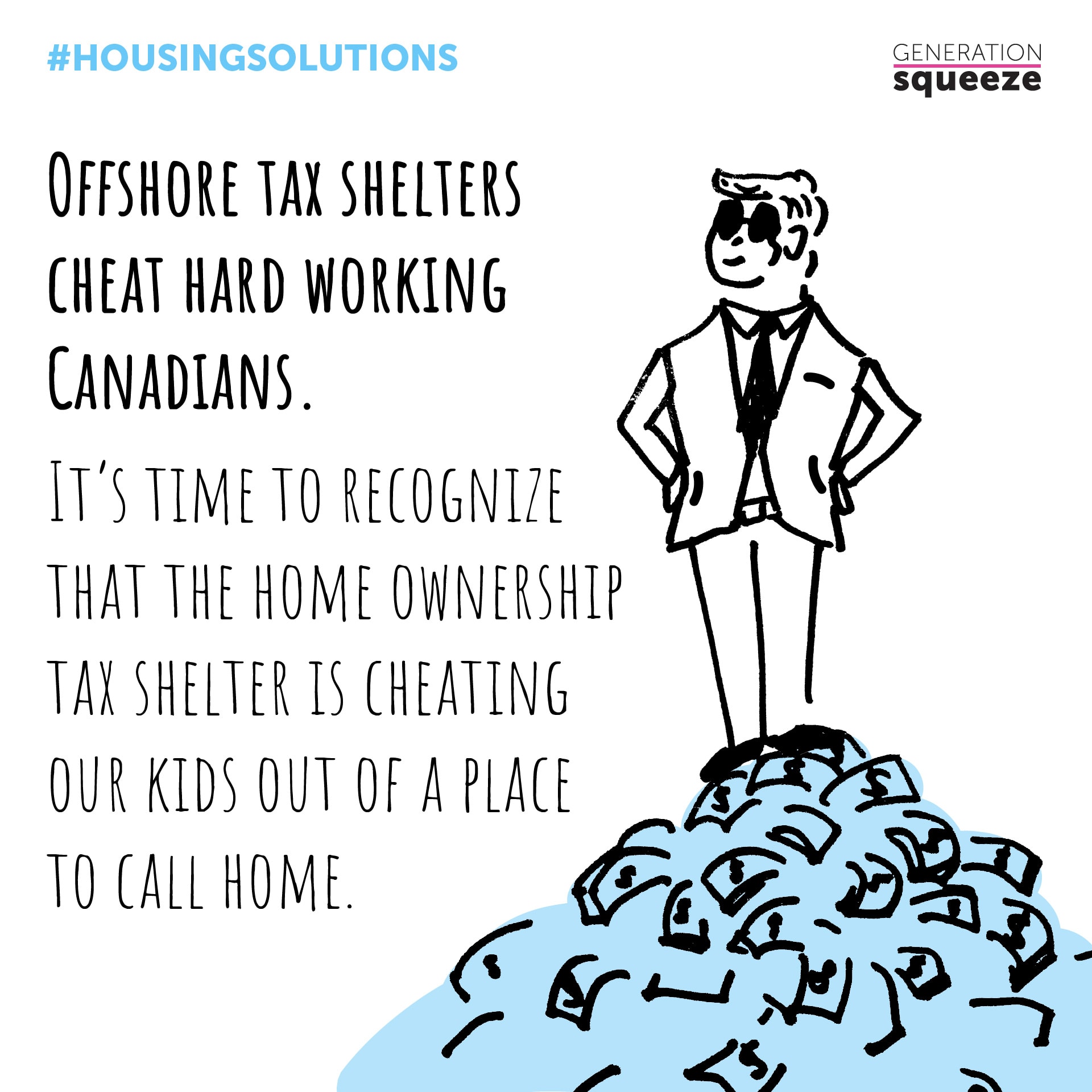 We can start down this path by putting a price on housing inequity by adding a modest surtax (starting at 0.2% and peaking at 1%) on home value over $1 million in order to slow down home prices so earnings have a chance to catch up.

New taxes are often a taboo subject in Canada, and already Canadians have been subjected to scare tactics charging that any changes to housing taxation are tantamount to government seizing your homes.  In reality, a Million Dollar Home Surtax won’t cost 90% of Canadians a penny.  It only proposes to tax a little more those living in the country’s most affluent homes.

If you own a home valued at more than a million bucks, you may be surprised to learn that you live in the 10% most valuable real estate in Canada.  You may be especially surprised, if your ‘million dollar home’ isn’t the mansion that some people might imagine goes along with this price tag.

Many of those living in million dollar homes today may not have expected to find themselves in this top 10%.  Many might have bought an average-priced home decades ago, and worked hard to pay for it with typical wages – never anticipating that enormous increases in home values would turn them into millionaires.  But expected or not, the same rising housing values that bestowed additional wealth on some, have crushed affordability for others, including younger and future generations and newcomers to Canada. 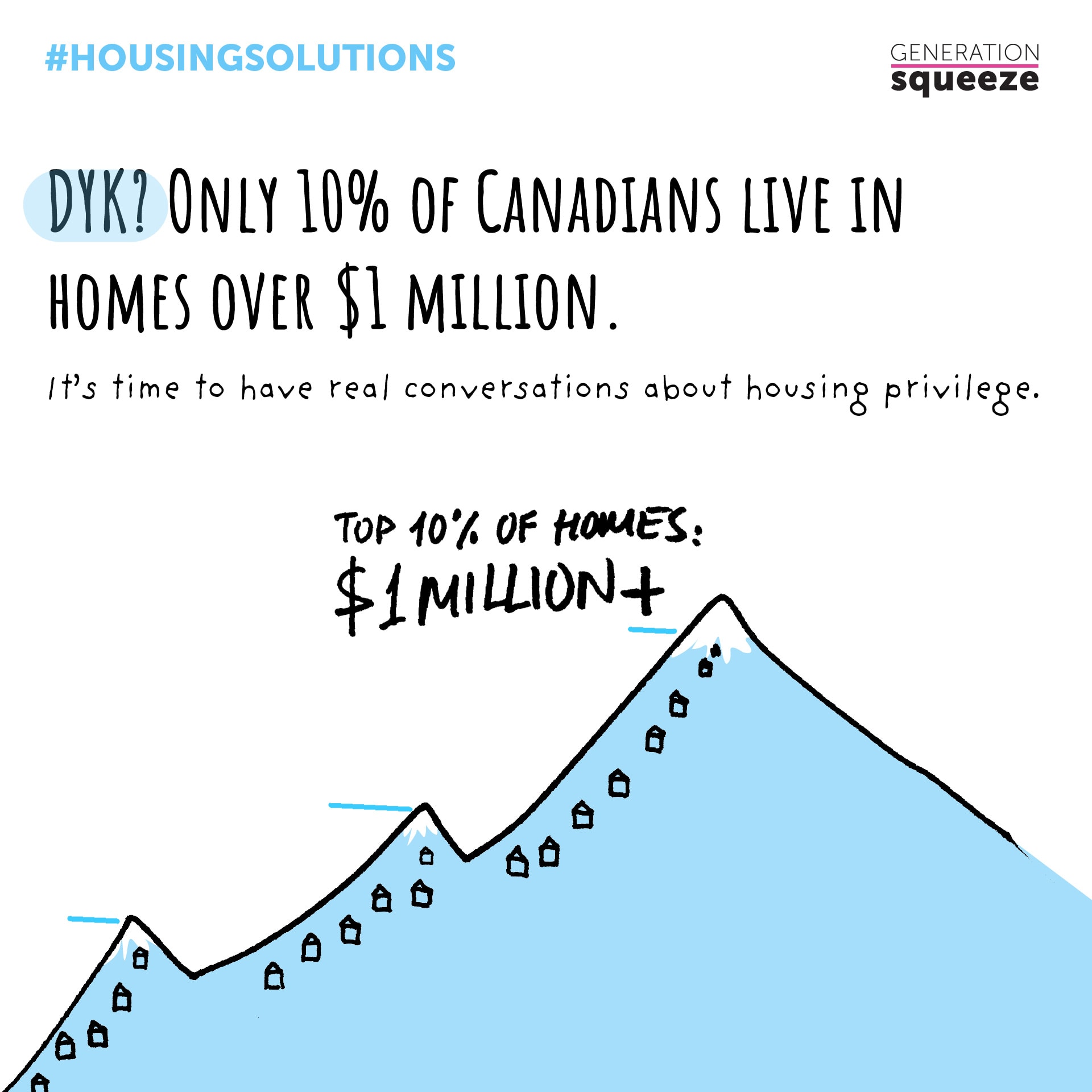 Still, even if you are part of the top 10%, there’s no reason to fear a Million Dollar Home Surtax.  A $1.2 million home would owe $400; a $1.5 million home would pay $1,000.  And just like the reverse mortgage programs so widely advertised on TV, you wouldn’t have to pay until the home is sold so we guard against disrupting people who are house-rich, but cash-poor.

An additional $400-$1,000 each year is a small price to pay to help slow runaway home prices so that the earnings of young people, seniors who rent, and newcomers can reconnect.  It’s also a modest figure when considered relative to taxes on wages. 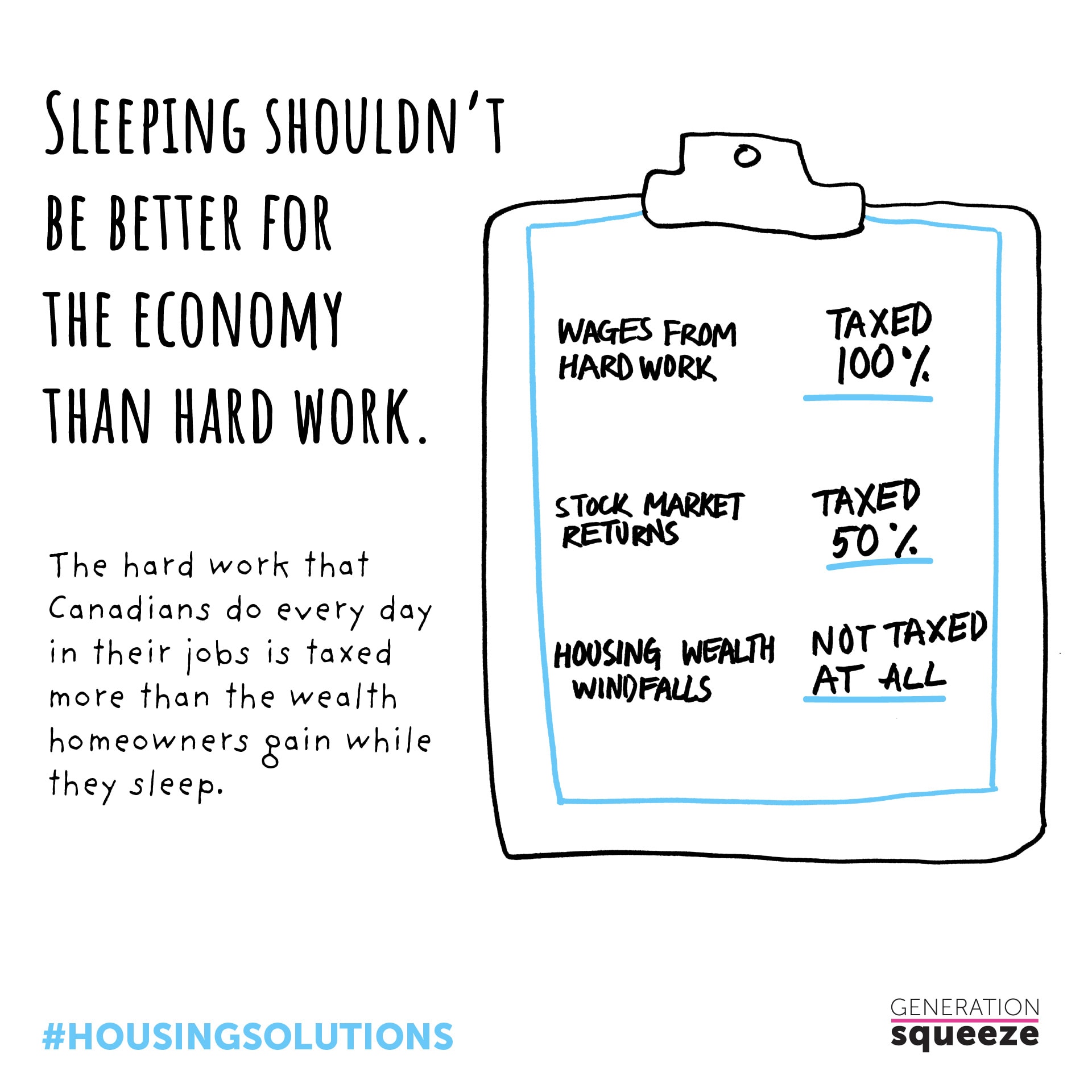 Middle income Canadians earning $60,000 a year pay about $10,000 in income taxes.  They pay this amount whether they are renting a home, or own a home that has increased in value by hundreds of thousands. The Million Dollar Home Surtax turns into policy the instinct we likely all share about these two scenarios – million dollar home owners are better able to pay a fraction more to tackle housing inequity.

The roughly $5 billion collected annually from the modest new tax will be used to make new investments in affordable rental and co-ops.

Taxing home value over $1 million isn’t new or scary. Despite what some may have heard, it’s not a blanket home equity tax, it’s not a capital gains tax, and it doesn’t require a big new government program to implement.  Putting a price on housing inequity requires only small adjustments to property taxation practices already in place across Canada.  It’s a reasonable step to disrupt a system that is harmful to many, without imposing unfair costs on the 10% who will be asked to pay a bit more.

Our governments are already adopting new measures to tax luxury cars, boats and planes as first steps to address wealth inequality. We also have new tax measures aimed at restoring housing affordability targeting foreign buyers, empty homes, house-flipping and short-term rentals.  These aim to restore affordability, but they affect too few households to make a big enough difference to the housing system overall.

We all know the saying “a person’s home is her castle”. Home is a sacred space of refuge and security, where we build our families and raise our kids. We cheapen what’s sacred about homes when we make it harder for everyone to access them by protecting tax shelters, at the expense of real shelters. 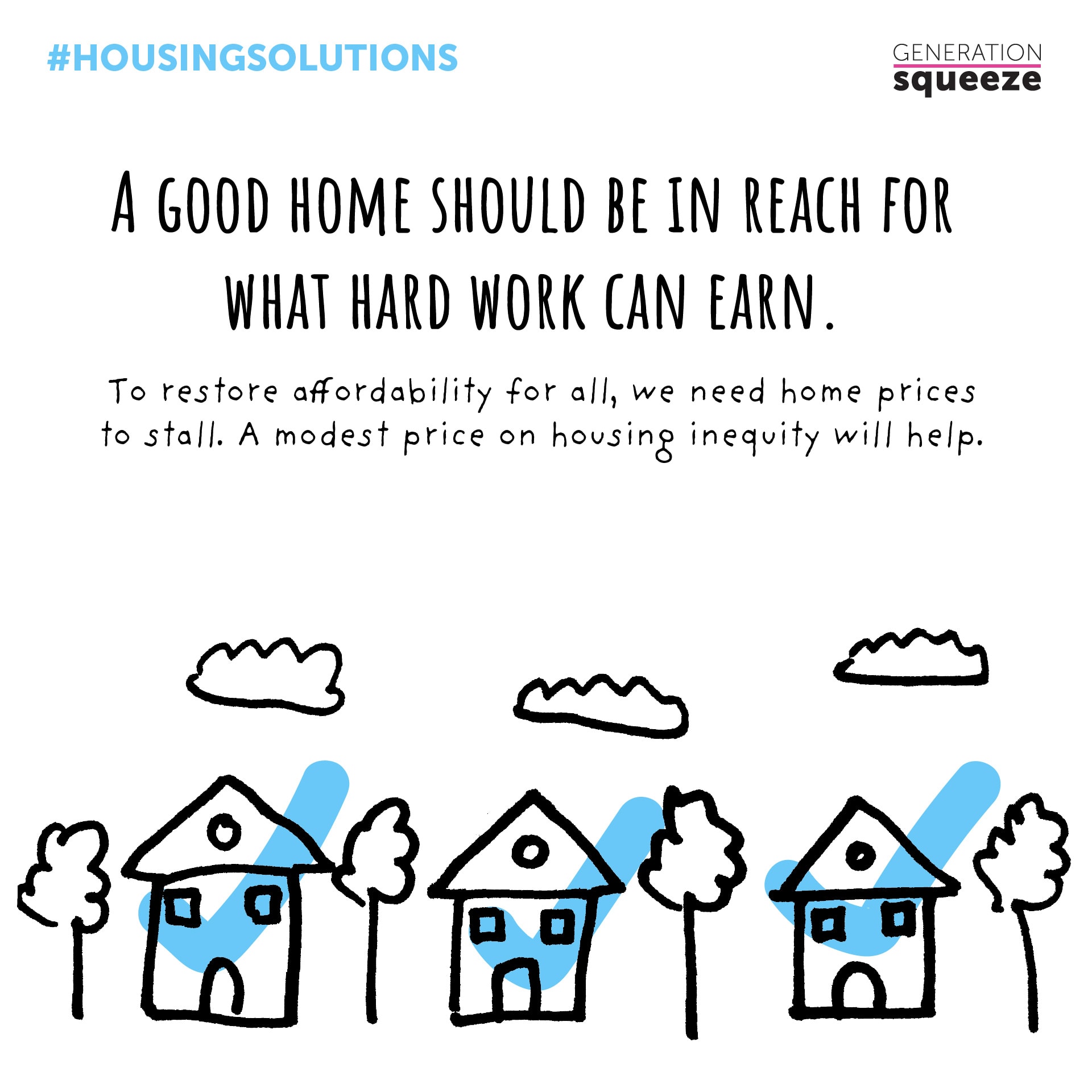 It’s time to ask the 10% owning Canada’s highest value real estate to tolerate a small price on housing inequity in order to demonstrate allegiance to the Canadian dream that a good home should be in reach for what hard work can earn, whether in rental or co-op housing, or as owners.

To restore affordability for all, we need home prices to stall, so earnings can catch up. A Million Dollar Homes Surtax is an important step toward this goal.

PS: If you are concerned that housing inequity is out of control and want to help us fight for generational fairness, join the Gen Squeeze movement! The larger our network, the greater our influence to achieve policy changes.