What young people want in the federal budget
The budget drops next week. We surveyed Gen Squeeze supporters to see what issues they want the government to prioritize.

We come into this latest budget with a decades long trend of governments being slow to invest in priorities for younger generations like child care, postsecondary and housing affordability. Indeed, had governments grown spending on young people as fast as the economy has grown over the last four decades, we’d be spending at least $19 billion a year more on Canadians under age 45.

That’s enough to build a national, universal child care program twice over. Or increase by nearly 50% spending on postsecondary education. Or accelerate a national housing strategy that closes the gap between rents, home prices and young people’s earnings.

While governments have been slow to adapt their budgets for younger generations, housing and childcare unaffordability have grown to crisis levels and we face a climate catastrophe that was caused by actions and industries that have given too little concern for the harms we inflict on younger Canadians and future generations on which they depend for their health and economic wellbeing.

No wonder some younger people question whether their votes don’t matter.

At Generation Squeeze, we know the feeling. It’s hard to feel represented when your issues seem ignored. But we can still raise our voices and tell politicians what we want.

That’s why we reached out to our supporters in February asking them what they want prioritized in the 2021 federal budget.

With the budget release coming April 19, we’re sharing the results. We’re compelled to use whatever platform we have to broadcast the voices and needs of young people from this poll.

Let’s dig in into it!

We asked our supporters to tell us what they wanted the federal government to prioritize in the upcoming federal budget. We got 565 responses in the short time the poll was live. We had one simple question:

What issues do you want to see prioritized in the 2021 federal budget? (select all that apply)

Here’s what they said:

There are a lot of things young people want to see prioritized in the upcoming budget! But three issues rise to the top.

The fact that climate change topped the list of issues should come as no surprise.

Just look at the number of people who participated in the Climate Strikes across Canada in 2019. Gen Squeeze went to marches in Victoria and Toronto and saw so many young people demanding better from our government. It was incredible and inspiring. 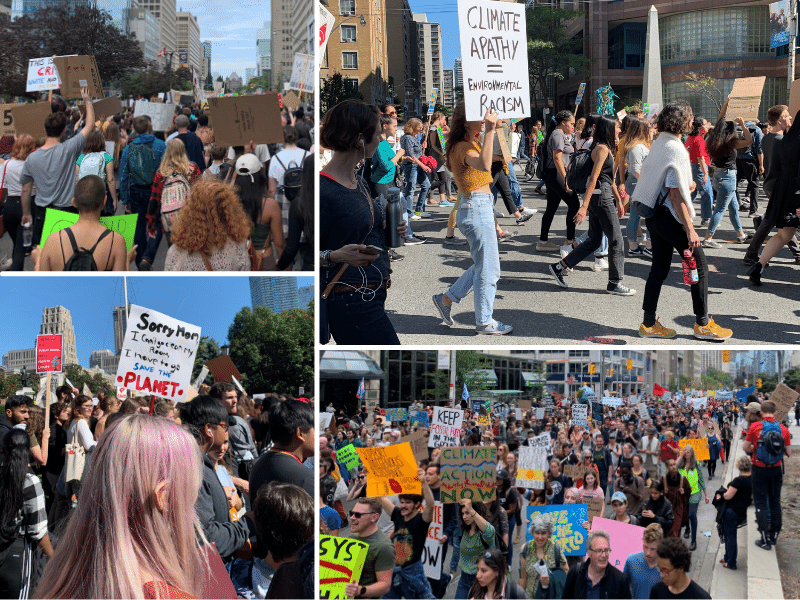 Since then, we haven’t seen much action from our government. We have seen some governments in Canada (looking at you Alberta, Ontario, Saskatchewan) try to challenge the price on carbon pollution in the supreme court, but luckily Gen Squeeze and the Intergenerational Climate Coalition intervened and won!

Young people expect more from our government on the climate crisis. The poll results make that abundantly clear.

The cost of housing

At Gen Squeeze we’ve tracked how long it takes for an average young person to save to buy a home. Compared to the 1970’s when it took 5 years, it now takes over 13 years. It takes even longer depending on where someone is buying. In Ontario and BC, for instance, it takes much longer than the national average, and still longer near large cities.

Young people, see those skyrocketing home prices and their dreams of owning a stable home are dashed. Plus, as a recently released study by Angus Reid shows, those struggling the most with rising home prices (including those saving and paying for these massive mortgages) are young people!

It makes total sense that the cost of housing is something Gen Squeeze supporters want to see tackled in this year’s budget. We’ll be watching for whether the government puts for policies to tackle the housing crisis.

With 2020 showing us that wealth inequality is still growing, even during an economic downturn when many are struggling and losing their livelihoods, it makes perfect sense why this is a rising issue for many.

At Gen Squeeze, we believe that our government needs to use and collect tax dollars better. We think any serious conversation about raising revenue needs to focus more on wealth, not just income, because wealth is the primary driver of inequality in society today.

Our focus shouldn’t only be on the uber rich with $20 million+ in assets. We could reduce the collateral damage to the housing market caused by the way that our tax system incentives people to treat housing as a way to get rich by honing in on homes worth a million dollars or more (in which only 9% of Canadians live). Given that rising home prices cause unaffordability, it’s time to revisit why we shelter housing wealth above $1 million from taxation like we don’t shelter gains from other assets in the stock market.

It essentially comes down to taxing bad things more (like skyrocketing home prices that cause unaffordability, or pollution), and taxing good things less. This is why we recently fought (and won!!) in the Supreme Court of Canada to support the price on carbon. When we tax pollution more, we disincentivize it. And as an added bonus, our government has more revenue to invest in things we want more of, like green jobs and lowering income taxes for lower- and middle-income earners.

We received hundreds of messages from our supporters as part of this poll. In their own words, they wrote out their message for the people planning the budget.

If you’re a decision maker in Canada reading this right now, please read all of these messages. These are the voices of young people who you represent and who need you to listen.

This is just a small sample of the messages received:

“End rampant land and housing speculation. Housing is not an investment tool - it’s a human right that needs to be protected through the full spectrum of government intervention.”

“After 50 plus years of advocacy, reports, economic reality, Covid has proven that child care is an essential service and Women can't work without it. Fund a national childcare program.”

“Young couples struggle to create the foundation for starting a family due to the combination of student loans, low incomes, and the cost of housing.”

“Start investing in FAMILIES. Universal childcare needs to happen. Families are handcuffed without it.”

“We need a clean economy and need to fight climate change or we will continue to face increasing challenges like we have this last year.. We need to look at the nuts and bolts of this and not a PR response.. We need to have good jobs for people especially for those who will be impacted by our switch to new energy sources. And we need to do something about inflated housing prices .. We are disenfranchising whole generations by putting money into the pockets of real estate investors , developers and realtors.”

“Money should be spent on a greener economy and job growth in those sectors. The only way we will get out of this economic slump is by making Canada a world leader in green economic growth.”

“Housing is too expensive especially for single people or single incomes. Housing is a place to get shelter, not shelter your money or to profit off of. Stop allowing people to use homes as an “investment””

“PLEASE! make it where people can afford to rent where they want to live at.”

“Design the budget for the real economy of real people, not the casino economy of the stock market. And stop squandering tax money on fighting First Nations in court to avoid taking concrete action on the issues that have plagued Indigenous people and Canadians since 1867.’