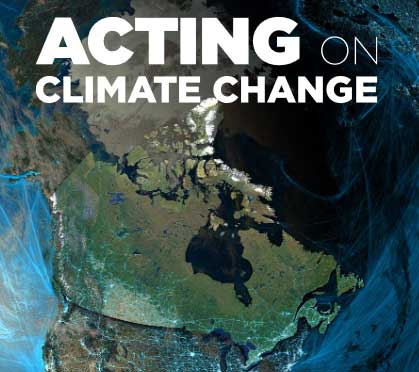 The 2015 Paris Climate Talks are now underway. More than 130 world leaders and an estimated 40,000 people are hammering out an agreement to attempt to steer the planet away from a climate disaster

Generation Squeeze believes Canadians should leave at least as much as we inherit. It's as a central theme in our vision for a Better Generational Deal; one that gives all Canadians a chance to live up to our potential, enough time and money to enjoy life, and the opportunity to work together to leave our country and planet better off than we found them.

This year Generation Squeeze contributed to a collection of policies and actions proposed by Canadian scholars in: Acting on Climate Change: Extending the Dialogue Among Canadians. The collection of 29 texts highlights perspectives from business, labour, youth, Indigenous and social justice movements to show that Canada is brimming with ideas, possibilities and maybe even the will to act. The Generation Squeeze contribution, “Building Political Will for a Low-carbon, High Prosperity Canada”, focuses on suggested policy adaptations for building political will on climate action. The following is an excerpt:

The scholars of Sustainable Canada Dialogues, are motivated by a shared view that putting options on the table will stimulate action and is long overdue in Canada. The recommendations are powerful in part because they reflect a consensus among more than 60 scholars representing every region in the country, and also because they articulate science-based, viable solutions for greenhouse gas (GHG) reductions that will ensure Canadians successfully meet our international obligations, along with our domestic commitments to intergenerational fairness.

While numerous research networks across the country deliver scientific expertise on climate change and sustainability, the Acting on Climate Change: Solutions from Canadian Scholars report acknowledges that “information alone is not enough to trigger leadership on climate change and more effective climate change governance. It is clear that decisions are made more on the basis of intuition and values than on rational, careful consideration of costs and benefits of action” (p. 47).

As experts about the large gap between scientific evidence and public policy decisions, Generation Squeeze affirms this conclusion… Government decisions respond to those who organize and show up.

Data show that citizens over the age of 45 are much more likely to cast a ballot than are citizens under age 45[i]. This age pattern in voting and political organizing poses a major barrier to the translation of research about climate change into government budgets and policy adaptations.

So long as Canadians under 45 are less likely to vote and organize in between elections, all political parties are less likely to design platforms that adapt for younger generations. This pattern is evident not only in regards to Canada’s tepid commitment to climate change policy in comparison to international leaders, but also in regards to other policy areas related to population health.

Generation Squeeze recommends that greater attention be paid to the implementation of interventions designed to increase the power of younger generations in the world of politics. Certainly, they have the most to lose.