“It used to take 5 years for a typical young Canadian to save a 20 per cent down payment on an average home.  Now it takes 12 years across the country. 15 years in Metro Toronto. 16 years in all of BC. And 23 years in Metro Vancouver,” explains Dr. Paul Kershaw, the study’s first author, and a professor at UBC.

“Even at historically low interest rates,” he adds, “it then takes the typical young Canadian an extra month of work per year to pay the mortgage.  In Metro Toronto and all of BC it takes an extra 2.5 months.”

Because average home prices in regions like Metro Vancouver surpass $800,000 and are well out of reach for most younger Canadians, the study examines what is available for less than half a million dollars – twice the cost of an average home in the region back in 1976-1980, after inflation.

The authors found that only 15 per cent of Metro Vancouver homes cost less than $500,000 and provide access to at least three bedrooms. 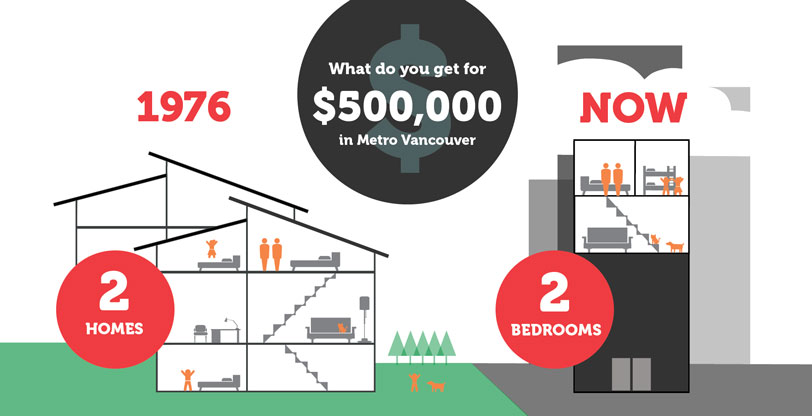 “There’s much the entire country can learn from Metro Vancouver to prevent problems in other regions from reaching the levels they have on the west coast,” explains Dr. Kershaw.  Canada has a well-established tradition of learning from regions where unaffordability problems reach intolerable levels.”

Coming out of the Great Depression and World War II, many Canadians could not afford a doctor – especially in Saskatchewan.  The gravity of circumstances in Saskatchewan motivated Tommy Douglas to dream differently for our country about how we might pay for and provide access to medical care.  Eventually, his dream awoke a nation to the broader pan-Canadian problem of unaffordable health care.  Canadians now define ourselves in large part by a noble policy adaptation to a problem that first reached intolerable limits in a particular region.

“We face a similar scenario today with respect to housing, and the need to adapt policy across the country.  That’s why the latest study published by Generation Squeeze is a solution-oriented document,” explains Executive Director, Eric Swanson.  “It offers 10 propositions for rethinking Canadian housing policy.  We offer them as conversation starters.”  The propositions are:

The study acknowledges that it is difficult for government policy to solve housing unaffordability problems, especially while protecting property values for existing home owners.  “That is why it is imperative for political parties to turn their attention in advance of the 2017 election to the broad range of costs squeezing young adults.  We can help ease the housing squeeze by no longer tolerating child care, parental leave, transportation, etc. adding up to second, third and fourth mortgage payments,” concludes Dr. Kershaw.

The release of the study marks the beginning of a year-long Code Red campaign to ease the housing squeeze, and marks the anniversary week of the #DontHave1Million rally co-hosted by Generation Squeeze one year ago in Vancouver.

The Code Red campaign is starting small in support of a big goal: to encourage all provincial and federal political parties to adopt bold policy adaptations that are capable of reining in housing markets that have grown out or reach across the country, and out of control in some markets.  Over the next year, the campaign will focus primarily in BC in anticipation of the 2017 provincial election.

Volunteer organizers are the backbone of a micro-financing campaign to raise funds for Code Red door hangers and window signs featuring the campaign’s red siren icon, along with red lights to put in porches, balconies and windows.

These symbols will accompany the “Homes First” petition and political pledge that Generation Squeeze will launch in conjunction with the new study.