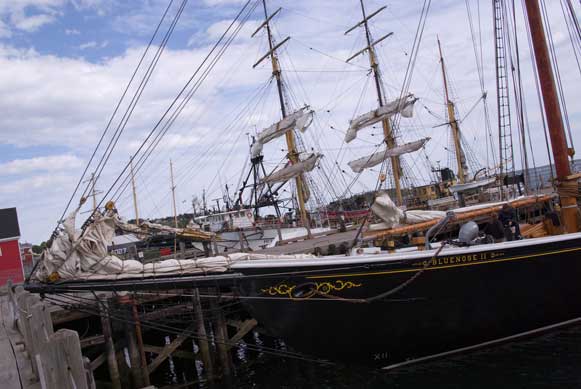 Nova Scotia is a province in need of change. This is the message we’ve been hearing on infinite repeat since the Ivany Commission finished its final report on building a new provincial economy in February. I won’t review the litany of challenges already here or soon headed our way. Let’s just say we’re not talking about a fresh coat of paint and scrubbing the decks kind of change. It’s closer to rebuilding the boat from bow to stern and from mast to rudder – kind of like our beloved Bluenose II.

And someone tell those contractors it needs to happen fast!

The Bluenose II boondoggle is an apt metaphor for Nova Scotia’s attitude to change – nothing happens quickly or easily here. After all, the Commission’s report, titled “Now or Never,” is only the most recent in a long line of similarly urgent calls to collective action. All previous calls have more or less gone unheeded and there’s no guarantee that this time will be any different.

Sure, there’s lots of talk about doing things differently. But it’s not at all clear that Nova Scotia’s political and business leaders possess the ideas or the incentives to promote change. Unbelievably, the “Now or Never” implementation panel is scheduled to release its plan (just the plan!) in December 2015, nearly two years after the final report was released! Where is the urgency?

Nova Scotia’s young people are central to this story. We have the energy, optimism, and education to be catalysts for change. We’re full of ideas and hungry for opportunity. But unfortunately, far too many of us still find it necessary to leave Nova Scotia to find such opportunity. And that is the crux of our problem. How do we build toward the future even as we watch the key players in that future – hard-working individuals, future power couples, and growing young families alike – trickle away year after year?

If Nova Scotia is ever going to change, it needs young people who love it here and who are deeply invested in the future of this place. To bring them (or keep them) here, we need to make Nova Scotia an attractive place to live, work, play, and grow. Ideally, our government and business leaders would recognize this with policies and practices that appeal to younger generations.

This is why I’ve chosen to be one of the Founding Members of Generation Squeeze in Nova Scotia. Gen Squeeze is a growing national organization that aims to unite and mobilize Canadians under 45 to push for government policies that recognize the many ways in which they are squeezed.

All of these apply to Nova Scotia’s young people and, as a result, many of us are feeling squeezed right out of the province!

The emergence of Gen Squeeze in Nova Scotia could be the opportunity many of us have been seeking. It offers a grassroots forum for young people to come together and advocate for change locally. It also offers an opportunity to join our strength with Gen Squeezers from across Canada to push for the kinds of structural change that we could never hope to achieve on our own.

I invite all young Nova Scotians to join us in building Gen Squeeze Nova Scotia and rebuilding this ship we all call (or want to call) home!