Our mission: to help voters better understand how far each party's platform is along the journey to actually solving these big problems facing young people today.

We'll be straight with you, this kind of analysis is really tough. The timelines are tight, the issues are complex, our own understanding is inevitably imperfect, the parties don't always make it easy to figure out where they stand or what they mean, they are making announcements every day that risk making our analyses outdated, and it's tricky to distill a wide range of promises into some sense of the overall strength of parties' plans... but not impossible.

To that end, we've done our best to craft a rigorous, meaningful and non-partisan approach. Our evidence-informed policy positions on these issues should come through loud and clear, but we don't make recommendations about who to vote for, because (a) you may or may not agree with our positions or analysis; (b) we don't presume to tell you what you should care most about; and (c) we ultimately know that younger Canadians build additional power to influence politics the more we vote, regardless of who we vote for. We'll say it again:

Both the spirit and substance of our analysis is neutral/non-partisan in that no part of it is intended to portray any individual party or candidate in inherently favourable or unfavourable ways or to direct people to vote for or against any specific parties or candidates.

Our work simply depicts how party positions align with criteria selected in light of academic evidence about housing, family policy, climate change and intergenerational justice in public finance. Our findings may reveal that some parties align more, or less, with the evidence. Pointing this out doesn't reveal partisanship. It reveals our commitment to report on alignment with evidence.

We have a genuine desire for ALL parties to improve the scores they receive according to our evidence-based evaluation system. We welcome parties to refine their promises during the campaign, and we will revise our evaluations accordingly. Success for Gen Squeeze is that all parties have equally strong platforms to solve the big problems facing younger generations so that voters ultimately choose between parties based on other criteria.

We are also open to critique of our platform analyses.  We welcome parties to contact Gen Squeeze directly to draw our attention to parts of their platforms that they believe are not evaluated properly according to the criteria we articulate, and we will adapt our evaluations accordingly as required by the evidence.

Instead of simply listing party promises, our assessment attempts to make meaning of those promises, individually and in aggregate, by:

For this election period, we will be focusing our analysis on the four major parties who began the race with at least one MP who was elected as a representative of that party, and who are running a national slate of candidates: which includes the Conservative Party, the Green Party, the Liberal Party, and the New Democratic Party.

The following family affordability framework was developed based on research led at the Human Early Learning Partnership (HELP), a research centre at the University of BC.  HELP has served as an international knowledge hub about early child development, and its impact on life-long health. Portions of it also align with and draw from the work of e.g. the national Child Care Now movement and the Coalition of Child Care Advocates of BC and $10aDay plan, to which Gen Squeeze has contributed. Read more about our framework design here. 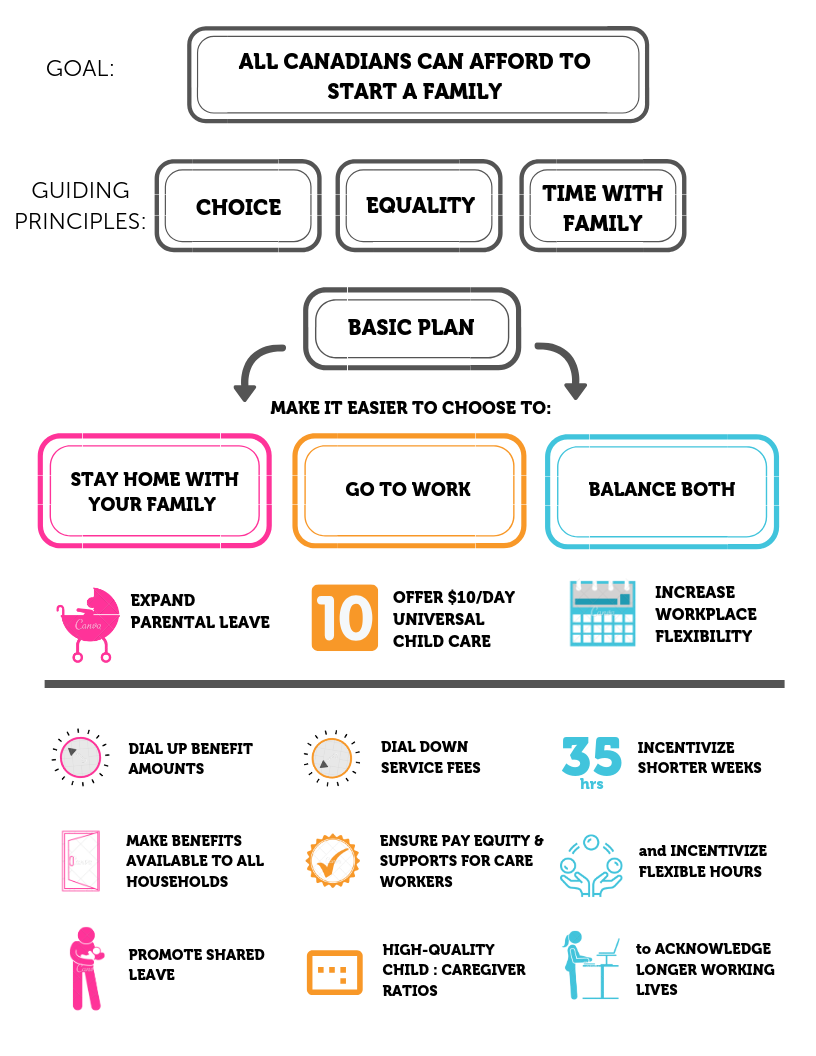 
We've translated our family policy framework into 12 key criteria, and we'll be assigning parties up to one point for their platform's response to each, as outlined in the following table.

For each key criteria, parties receive a score that ranges from +1.0 to -1.0, assessed as follows:

This five-point method was chosen because (a) it’s relatively simple, (b) it's capable of distinguishing between narrow/shallow responses and comprehensive responses to each criteria, especially the criteria that relate to broad policy categories, and (c) it allows us to subtract points where the evidence suggests a particular policy or group of policies put forward by a party is likely to exacerbate the problem/take us further away from the goal

The limitations of this method include:


Our family policy framework was developed based on research led at the Human Early Learning Partnership (HELP), a research centre at the University of BC.  HELP has served as an international knowledge hub about early child development, and its impact on life-long health. Our policy recommendations are informed especially by research published in the following publications:

The middle component of our family policy framework (a system of universal child care) aligns closely with and draws from the work of e.g. the national Child Care Now (https://timeforchildcare.ca/) movement and the Coalition of Child Care Advocates of BC (http://www.cccabc.bc.ca/ ; and https://www.10aday.ca/).

This Analysis is Non-Partisan

Our vision of a Canada that works for all generations is a long-term vision. To achieve and maintain that vision, we need to bridge ideological and political divides in our society, and to find common ground amongst a diversity of people and perspectives. That’s why Gen Squeeze’s research and advocacy activities are designed to help all political parties and levels of government in the design of policy capable of achieving our vision.

At any given time, any given political party or government may be more or less responsive, and more or less circumstantially aligned with various aspects of our work. However, any relative responsiveness or circumstantial alignment in no way reflects an intention on our part to promote or oppose, directly or indirectly, specific parties or candidates.

We neutrally assign an aggregate score for each party’s plan on each of the four issue areas NOT because we hope to point voters in one direction or another, but because we believe many voters will benefit from having access to a sense of the overall strength of the various promises that have been made.

The frameworks and goals, key criteria, commentary and scores all reflect and distill many individual evidence-based policy positions of Generation Squeeze, and audiences should come away with a good sense of where we stand on the issues and how our positions compare to the positions of the major parties, but our detailed commentary and scores are not intended to portray individual parties or candidates in inherently favourable or unfavourable ways.

This Analysis is Evidence-Based

Gen Squeeze’s research activities are coordinated by Dr. Paul Kershaw, who is a tenured Professor in the School of Population and Public Health at the University of British Columbia.

By virtue of Dr. Kershaw’s professional responsibilities, and Gen Squeeze’s own commitment to organizational credibility and rigour, our public policy positions are rooted in our understanding of the best available evidence.

This means that from time to time, our positions and policy interpretations will change, either because we’ve published or been made aware of new evidence, or because our understanding of existing evidence has been enhanced by a new perspective(s).

No one person or organization ever has “the full picture,” which is why we admit our imperfect understanding, embrace nuance, and continually strive to identify and correct our own blind spots through collaboration.

Because our platform analysis will be inherently taking a number of positions on issues with which candidates and parties may be associated, and spending more than $500 on paid advertising to help distribute this analysis, we are registering as a third party election advertisers during the 2019 federal election.