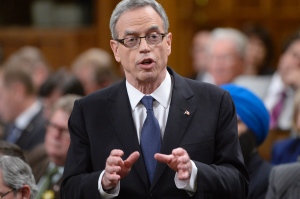 Budget 2015 spends more on grandma’s medical care and income security, while asking grandma to contribute less to paying for these benefits. It may sound like a reverent thing to do for one’s elders, but it is a blow to generational equity.

Gen Squeeze founder Paul Kershaw was in the federal budget lockup to crunch the numbers and see what the government's plan does to ease the squeeze on younger Canadians:

Simultaneously, the Conservative government increased the contribution limit for Tax Free Savings Accounts.  TFSAs are primarily used by older, affluent citizens.  Canadians age 60+ are three to five times more likely to max out their TFSAs compared to those age 18 to 49.  TFSAs then shelter the deposited investments from further taxation no matter how well investments payoff.  Plus budget 2015 cut another $167.5 million per year in taxes for affluent seniors by changing rules governing Registered Retirement Income Funds.

This pattern might be okay if the evidence showed that our aging population had prepaid for its medical care as it has prepaid much of its Canada and Quebec public pensions.

Unfortunately, a new study about population aging, generational equity and the middle class shows it hasn’t.  Spending on medical care for citizens age 65+ is up $32 billion annually compared to 1976 (when measured as a share of our economy).  But governments haven’t raised any additional revenue to pay for this extra spending.

I want my 70 year old mom and 99 year old grandmother to have the medical care they need.

They want to pay their fair share.  They know they have personal responsibility to do so.  Otherwise they leave the bills to their kids and grandchildren, or leave less in government coffers to adapt to new challenges facing their offspring.

This problem is already playing out.  Total government spending on family time, cash and services along with grade school and postsecondary is down around $15 billion annually compared to 1976.  This spending is down even though twice as many young people now attend postsecondary, and the demand for family time and child care services has skyrocketed along with the proportion of young women in the workforce.

But wait.  Hasn’t the government been calling this the Family Tax Cut budget?  Doesn’t this benefit younger generations?

When we examine total federal spending in 2015 on Elderly benefits, Employment Insurance, Children’s Benefits, the Canada Health Transfer and the Canada Social Transfer, the government allocates approximately $11,000 per person age 65+, compared to around $2,000 per person under age 45.

The Conservative income splitting plan did little to influence this distribution.  Although the goal of promoting parental time with kids is laudable, income splitting helps just 38 per cent of families with children.  The maximum benefit is $2,000/year.  Only well-off one-earner couples will save the maximum.  Most will save $1,000 or less at a cost to tax payers of $2 billion annually.

Since few benefit from income splitting, the Prime Minister also increased the universal child care benefit by $60/month for children under 18.  This change will not yet bring federal spending on income supports for families with children back to the level it was when today’s aging population enjoyed the universal Family Allowance program while raising their children.

Nor does the Prime Minister’s plan build child care spaces, or bring their cost down from above university tuition levels.  This is a problem, because affordable child care is a major missing piece of our social policy puzzle along with the loss of parental time at home compared to the past.  Both problems are now much greater for younger Canadians in their prime child rearing years since their full-time earnings are down thousands of dollars compared to 1976, while housing prices are up hundreds of thousands.

In anticipation of the budget, the Canadian Association of Retired Persons organized public demonstrations in support of TFSA increases and medical care spending, among other issues.  Their organizing contributes to a world of politics that responds accordingly.  So long as the aging population has a strong lobby, younger generations deserve one too.  When younger generations don’t organize, the world of politics doesn’t work for all generations.

Dr. Paul Kershaw is a policy professor in the UBC School of Population Health, and Founder of Generation Squeeze (gensqueeze.ca).