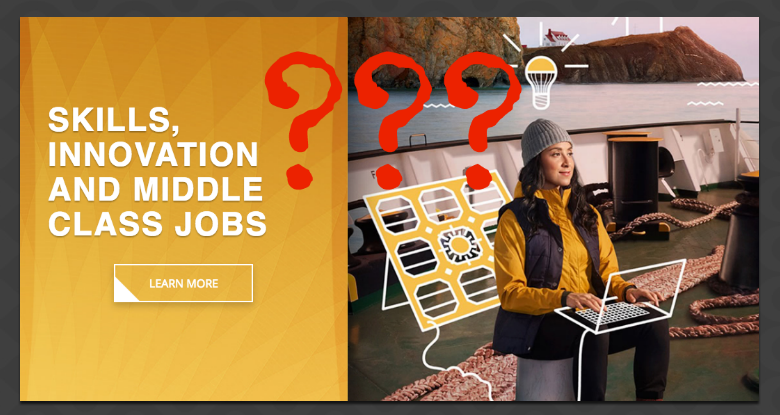 Finance Minister Morneau’s 2017 budget commits to strengthening the middle-class, and supporting those working hard to join it.  Alas, his budget numbers show that Ottawa offers considerably more hope to the aging population than to their kids and grandchildren.

Finance Minister Morneau’s 2017 budget commits to strengthening the middle-class, and supporting those working hard to join it.  Alas, his budget numbers show that Ottawa offers considerably more hope to the aging population than to their kids and grandchildren.

The Finance Minister may not yet know his government is slower to adapt for younger Canada than for the aging population because the federal government does not report how spending breaks down by age.

For now, the Generation Squeeze research lab based at the University of BC is filling this gap.  However, it is time for Ottawa to include the age distribution of government spending in its annual budget.  Otherwise, parliamentarians cannot assess whether the government is finding the right balance between investing in young and old, and between investing earlier in each citizen’s life, compared to later.

The programs that won out in the 2017 budget are Old Age Security and Health Care.

That projected annual $12.6 billion increase in OAS is larger than the entire 11-year budget for the National Housing Strategy.

The projected annual $5.8 billion increase to the CHT is almost as large as what the federal government will spend on childcare over the next 10 years.

So, in sum:  Yes, there is new spending for childcare, parental leave, postsecondary, job-training and housing.  And that’s important, because research shows that Canadians in our 20s, 30s and 40s earn thousands less for full-time work compared to when the aging population was young, despite having more postsecondary, starting more often with student-debt, facing home prices that are up hundreds of thousands dollars, and paying childcare costs that equal another mortgage-sized payment.

But new dollars invested in childcare, postsecondary, housing, etc. are modest by comparison with major components of the federal budget, and often add little more than rounding errors on total spending.

The most notable of new investments may be the $1 billion annually invested for 11 years into a National Housing Strategy.  Unfortunately, the budget’s discussion of this strategy doesn’t engage with the enormity of the problem that Canada’s housing market presents younger generations.

Whereas “seniors” are highlighted as “vulnerable” in the housing market, there is no mention of young Canadians struggling with the rising costs of rent and ownership.   This is ironic, because seven in ten seniors are home-owners, and represent the age group that is especially likely to have gained wealth as a result of the escalation in home prices over the last decades.

By contrast, their kids and grandchildren are caught in a vice-grip of time and money pressures.  It used to take 5 years of full-time work for a typical young adult to save a 20 per cent down payment on an average home.  Now it takes 13 years across Canada, and over 20 years in the Greater Toronto Area and Metro Vancouver.

Beyond glossing over “young” Canadians, the budget’s discussion of a national housing strategy also suffers because it never mentions the word “wealth.”  It completely ignores how many Canadians have been big winners in the lottery of skyrocketing homes prices.

Foreign buyers are not the only people reaping big investment windfalls. Lucky timing also benefitted many regular Canadians who started their working lives as teachers, bus drivers, or assembly-line workers, and who managed to purchase homes decades ago when prices were in reach for what typical people earned.

Now that prices have more than doubled (after inflation) from coast to coast, and soared in our biggest cities, the real estate market has since transformed some of these regular folk into the “well-to-do.”

These housing wealth gains have been sheltered from taxation.  For example, Ottawa will forgo $6.7 billion in revenue in 2017 by not taxing the capital gains from the sale of principal residences.  That’s a lot of revenue to leave on the table for a government that is $28.4 billion in deficit in 2017 – deficits which are generally left to younger generations to pay.

Just as the new national framework to price carbon prioritizes the principle of raising taxes on things we don’t want, so we need to apply the same principle to soaring home prices.  As it struggles to balance the books, Ottawa should consider Generation Squeeze’s recommendation to tax housing wealth in new ways to cool housing markets so home prices remain in reach for younger Canadians.

The federal government should also continue to review outdated tax expenditures.  For example, the 2017 budget saved money by cutting the public transit tax credit from which young people primarily benefit.  But it left untouched the much larger Age Credit from which Canadians over 65 shelter income – on top of receiving Old Age Security and the Canada Public Pension. The logic of this trade-off is unclear.

As the Prime Minister likes to say, “Better is Always Possible.”  So it is with his 2017 budget. We should protect medical care and retirement income security for our parents and grandparents. But we must also adapt as urgently to the time, money, service and environmental squeeze facing younger Canadians.  Let’s hope the PM strikes a better balance in his third budget.