Analysis of the 2022 Federal Budget

Analysis of the 2022 Federal Budget

The 2022 federal Budget has arrived, and there’s lots going on in it!  As usual, our view here at Gen Squeeze is that the talking points don’t give you the full story on what the Budget means for generational fairness. Here’s our analysis of new investments in seniors, child care, housing, wellbeing, and health… and our thoughts on the incredibly large deficits still being posted, even though we’re not in a recession.

Budget 2022 continues Canada’s strong legacy of investing in seniors. We should be proud that these investments are paying off, as fewer seniors are poor compared to any other age group.

But once again, the government buries this fact in Budget fine print. Canadians have to scan all the way to page 188 or Table A1.6 (on page 232) to learn about investments in seniors (and really, does anyone look that closely at the Budget?!?). You’ll see nothing in the news releases. There’s no talking point on these investments, which risks having major news Networks misrepresent where the dollars are going.

That’s a problem, because retirement income security spending is the elephant in this Budget – accounting for an additional $85 billion over the next 5 years. As most people rarely think at the scale of billions, here’s some context. Over the same 5 year period the government is spending $30 billion more on medical care (half to retirees), $27 billion more on child care, $10 billion more on housing, and $9 billion on climate change. 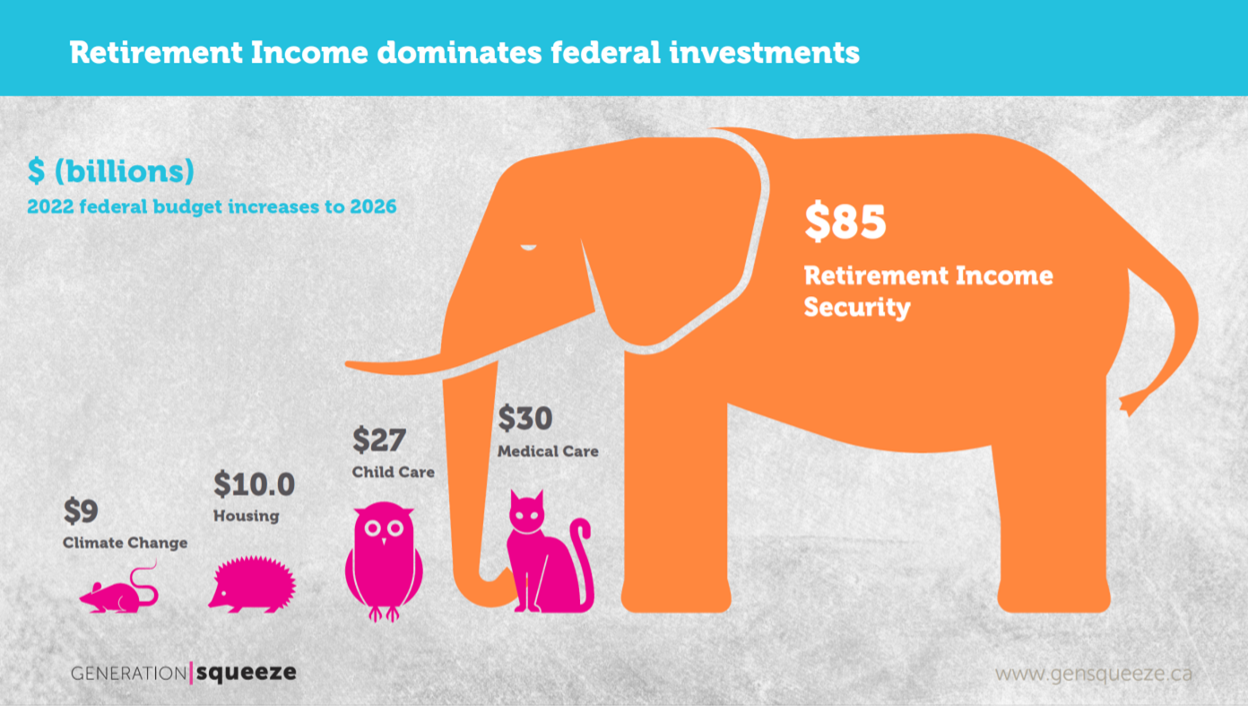 The bottom line is that the elephant sized increase in retirement income spending is responsible for nearly 60% of the $148 billion in deficit spending that the federal government plans over the next 5 years – even though Canada is NOT in a recession.

By hiding this reality, Budget 2022 misses the opportunity to initiate a serious conversation about what is driving our deficits, how to address it, and how to cover the costs. That’s a big problem for generational fairness. Planning for all ages is a core gen fairness principle – especially to ensure we use public investments wisely to advance wellbeing from the early years onwards.

The #HardTruth is that Budget 2022 treats Canadians as if we have become people who want more, but aren’t willing to pay for it. Without honest dialogue about how to pay for new investments in retirement income, dental & pharmacare, growing debts will be left to younger and future generations. That’s not a legacy of which many would be proud.

The federal government deserves many congratulations for establishing a national $10 a day child care system. Creating medical care and public pensions in the 1960s lifted most seniors out of poverty.  Affordable child care is an urgent update needed to respond to new cost of living pressures for entire generations raising young kids.

Over a decade ago, Gen Squeeze branded ‘$10 a day’ to name our national child care recommendation. With a pan-Canadian $10 a day system finally coming into place, we can be proud that child care will no longer cost another rent or mortgage sized payment. The timing is critical – families need all the help they can get as housing prices continue to skyrocket. That’s why $10 should be the MAX daily child care fee, not just the average. We’ll continue to advocate for this ceiling in future federal and provincial budgets.

An affordable national $10 a day child care system is a big step towards improving wellbeing from the early years onwards. We only have one chance to get people off to a good start, so we must plan and invest in young people’s wellbeing just as much as the aging population. On this score, it’s interesting to observe that the extra $8B per year we’ll be spending on child care by 2026 is framed as ‘historic’ while the extra $26 billion per year we’ll be spending on Old Age Security by 2026 is barely mentioned. All the more reason to be cautious about just looking to the Budget highlights, as they don’t tell the whole story.

Canada has a housing affordability crisis. Home prices rose over 20% last year alone, and are up 318% since 2000. Unaffordability is no longer confined to the largest urban centres – the contagion has spread to other provinces and many smaller communities.

Budget 2022 allocated $10 billion over 5 years to address housing affordability. This may sound like an impressively large number. But to continue the theme mentioned above on child care, it’s a small amount compared to the whopping $85 billion increase in federal spending on retirement income – especially given the scope and scale of affordability challenges… even before growing inflation in other costs of living.

The government doesn’t acknowledge in Budget 2022 that Canada’s addiction to high and rising home values is a root cause of the housing crisis. The wealth many homeowners gain from skyrocketing prices is the unspoken flip side of unaffordability. The #HardTruth is that the problem isn’t only foreign investors – though yes, great to see that the Budget may reduce the contribution they’re making to driving up prices. We also have to consider wealth windfalls garnered by ‘mom and pop’ investors – aka regular Canadians who are simply living in homes the value of which has skyrocketed. Read more from Gen Squeeze on this issue here.

Budget 2022 also fails to fix problems with Statistics Canada’s measurement of housing inflation. As Gen Squeeze discusses in more detail here, had Statistics Canada reported accurately on housing inflation years ago, we could have recognized the perils of runaway prices sooner, sparing younger generations the burden of coping with soul-crushing levels of unaffordability. Check out our blog series on inflation and monetary policy to learn more.

There’s an entire chapter in Budget 2022 devoted to closing tax loopholes and expecting the wealthy to pay their fair share. But there’s no mention of the home ownership tax shelter that incentivizes homeowners to welcome rising home prices. And the Budget doesn’t ask Canadians who own the most valuable 10% of homes to contribute slightly more to address the affordability crisis that has locked many younger Canadians, renters and newcomers to Canada out of the housing market altogether. Gen Squeeze’s proposal is to put a modest price on housing inequity.

As for other housing actions in Budget 2022:

Overall, the punchline on housing is that we need more political courage to commit to the goal that home prices should stall so earnings can catch up.  The federal government wasn’t brave enough to take this position in the Budget – perhaps out of fear of angering homeowners. But polling shows that 70% of Canadians support the statement that: “To restore affordability for all, home prices must stall, so earnings have a chance to catch up.”

In Budget 2022, we were looking for the federal government to grow the Canada Social Transfer more than the Canada Health Transfer. With investments for child care, early analysis suggests Ottawa met this goal.  Here’s why this is important.

Health is about the world all around us – the air we breathe, the food we eat, where we live, where we work. Creating health requires investments in social conditions, not just medical care. Of course we want a good mechanic when our car breaks down, just like we want a good doctor when we’re sick. But what we want even more is to stay out of the repair shop. We can by investing in social conditions that make and keep us healthy.

Canada’s medical care system was never supposed to go it alone. It’s supposed to be part of a wider system supporting people with decent jobs, pay, homes and education. Because Canadians can’t thrive when they don’t have the things they need for good health – like warm homes, good jobs, and a safe environment. Growing money for medical care shouldn’t crowd out spending on health. It’s good to see the federal government recognize this in Budget 2022.

Budget 2022 investments in child care, housing, and climate change are steps in the right direction for generational fairness. But we need the government to be more transparent about where the largest expenditures remain (ie retirement income security for seniors) so Canadians can have an informed conversation about what is driving our spending, deficits and debt – and the revenue needed to cover new or growing costs.

Each generation has a responsibility to take care of our collective resources, so that we preserve what is sacred for those who follow – like a stable climate, a healthy childhood and a good home. This means, in part, ensuring each generation pays for what it uses, contributing in proportion to the needs, opportunities and wealth it inherits – versus leaving its bills unpaid, creating debts for those who follow.

Our needs are different as we age, so we need to plan wisely how we use public investments to meet them. We have a duty to care for older generations as health needs and frailty increase – but we also know that we only have one chance to get people off to a good start, to prevent problems down the road. So we also must plan and invest in young people’s wellbeing, just as much as the aging population.