Which federal parties will ease the family squeeze?
By Ryan Vande 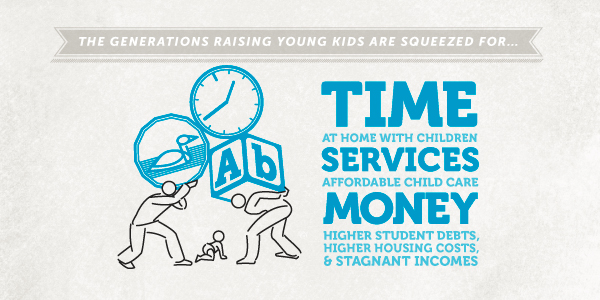 Families are squeezed for time, cash and services.

This problem is front and centre in the federal election. Gen Squeeze helped make this so, because international research shows Canada has particularly weak family policy.

Our work has contributed to all four parties committing $4 to $7 billion more in annual spending on families.  This is a real victory.

Alas, this new money for families pales in comparison to the minimum $13 billion increase that all the parties are committing to Old Age Security (OAS).  It pales all the more when we recognize the $4 to $7 billion for families with children is spread over the majority of the population, whereas the OAS investment targets 16 per cent of the population age 65+.

Still, let’s celebrate our initial victories by following the money[1]…

The Conservatives promise $4.9 billion in new spending for families.

Will the new money be spent wisely?

The answer depends on your perspective and values.

Families with at-home parents:  If you are (or hope to be) a couple in which one parents stays home most of the time with kids, then you may prefer the Conservative approach.  Half of its new money is reserved for you through income splitting from which just one third of Canadian families can benefit.  This will deliver up to $2,000 a year to qualifying families, with higher earners benefiting more.

Parental time at home and gender equality:  The Conservative plan doesn’t include measures to encourage dads to share responsibility for caregiving at home with moms.  On this front, the NDP and Greens are stronger.  The NDP are adding $500 million a year to add five weeks of parental leave benefits (primarily) for dads.

The Greens endorse a Generation Squeeze recommendation that would stretch to six months the period reserved for dads, along with six months for moms and six months to be shared how parents choose – totaling 18 months per household.  However, Greens don’t say where they will get the funds to pay for this commitment.

The Liberals will add $130 million to lengthen leave to 18 months per household, but don’t incentivize dads to share leave time.

Gen Squeeze estimates that a meaningful extension of parental leave to 18 months per household will cost $10 billion.

Enough time in the labour market and gender equality: Canadians in their 20s, 30s and 40s earn thousands less for full time-work, start with larger student debts and face higher housing prices.  These factors drive most Canadian households to have two earners even when they have younger children, and result in most lone-parents working.

Other than in Quebec, child care services cost the equivalent of a second mortgage.  Three of the four national parties have talked about fixing this, which is important for household finances and women’s equality in the workforce.

The Greens commit more money to child care services than any other party.  They would do so by reallocating $6.7 billion in existing spending, and adding another billion on top of this.  Such money would go a long way to bringing the cost of quality child care down to $10/day.

There remains a large gap between the NDP investment and the $10 billion incremental cost of a national child care system.  A chunk of the gap could be closed by reallocating $2.4 billion that Ottawa spends on the spousal and equivalent to spouse credits.  The spousal credit is outdated, delivering tax relief to couples where one person doesn’t work regardless of whether children are at home.

The Liberals also promise a new National Early Learning and Child Care Framework, funded from its social infrastructure budget.  Assuming ¼ of this funding goes to child care services (with the rest going to seniors, housing and culture/recreation), Liberals would allocate $300 million per year for this framework in 2019/20.  Since there is a big gap between $300 million and the $10 billion cost of a high quality child care system, the Liberals will also need to explore options like reallocating the outdated spousal tax credit.

Save families a little extra over 18 years, or save them a lot before kids start school?

The Liberals and Conservatives promise relatively little money for child care services and parental leave because they prioritize building on the historical way that Ottawa has supported families:  delivering monthly child tax benefits paid to families until their children reach 18 through the Canada Child Tax Benefit, National Child Benefit Supplement and the Universal Child Care Benefit.  These monthly cheques often add up to a couple thousand dollars a year per child.

The Conservatives added $60/month to these cheques heading into the election.  The Liberals doubled-down on this approach, consolidating a bunch of existing tax credits and adding billions more to make Liberal cheques $1,000 to $2,000 more generous annually than Conservative cheques for households earning less than $150,000/year.

No one will object to receiving another $60 or so per month for children up to 18 years.  But it’s worth questioning whether the same money would be spent better over a shorter period of time to save families tens of thousands of dollars in parental leave and child care costs before kids start school.  This question is all the more important, since the Canada Child Tax Benefit already provides most families with sizable monthly cheques, and schools represent a major public investment in kids age 6 to 17.  The major missing piece in our family policy puzzle occurs for families with preschool age children.

[1] We examine how federal government spending would change by 2019/20 under each party.  We compare this spending to what spending looks like in 2014/15 – the last full fiscal year heading into the federal election.

[2] The Green platform is unclear about the timing of when it will reallocate the $6.7 billion.

Dr. Paul Kershaw is Founder of Generation Squeeze, and a policy professor in the University of BC School of Population Health