Victoria B.C. can feel pretty, well... Victorian. Some say it’s too old fashioned, moves too slowly, and shuts down too early, while others find it to be a beacon of west coast life, culture, and progress (I happen to think it’s all those things).

Then Victoria city council shook things up a little: at public hearing last week, they voted unanimously to permit garden suites in municipal zoning. This is way cool! Why? Because it has the potential to pave the way for more diverse and secure rental options in a city with a super depressing vacancy rate.

Congratulations are in order! It’s encouraging to know council was able to take this bold step forward when we know there's so much important work left to do.

Most importantly, we want to thank each and every Gen Squeeze letter-writer for sending words of encouragement to our municipal leaders.

110 people supported council on this important move with personal letters, and seven Gen Squeeze all stars joined us at the hearing to share their personal stories and speak up for their peers. We are amazed and humbled by your participation!

The issue was covered by CHECK News (twice!), The CBC, and we even got a special shoutout from Mayor Lisa Helps on her blog!

“Build it and they will come. Well we have a reverse problem: they have come, but we haven’t built it.”

Two years ago, Victoria released a housing strategy and set up a special affordability task force that recommended permitting garden suites in zoning and delegating approval authority to city staff. This would simplify the lengthy, costly process, and it would eliminate the need for residents to obtain approval directly from city council.

Why we support garden suites

Garden suites increase housing diversity and choice, and can improve housing affordability for both renters and homeowners. For renters, these private accessory buildings can serve as a unique and autonomous housing option. For homeowners, the addition of a garden suite to the property can produce secure rental income.

They can also provide increased privacy over secondary suites or multi-unit housing and allow for neighbourhood densification that doesn’t require tearing down heritage homes, helping to maintain the character of a community. They’re also housing options that will stick around long past the typical length of time someone owns their home. As one gentleman at the hearing put it, “Even after we’re gone, that suite will remain in the rental market.”

What people were saying

Something that repeatedly came up in letters to council and at the public hearing was the well-thought-out consideration of using garden suites to house extended family. While our main prerogative was to promote this zoning change as a partial solution to the housing crisis and Victoria’s scarce vacancy rates, we wholeheartedly support the use of garden suites to help families live happier and healthier together.

One speaker described wanting to build a garden suite so that they, the grandparents, could move into the smaller suite and have the kids and grandkids move into their main house, keeping the whole family together and reducing basic costs of living and childcare.

Councillor Marianne Alto also shared personal remarks explaining how she’s a landlord to two 21-year-old students with no jobs who hard a difficult time finding housing -- the “antithesis” of who she was told she should rent to.

“No one would give them a place to live and I took a chance on them -- and they’re awesome. They’re everything you ever wanted as tenants. They have a dog, they love gardening. They’re working toward having good lives here, they want to stay in the city, and they’re exactly the type of people who couldn’t find a place to live.

“But I charge them exactly what it costs me to own that house and nothing more, because the investment that’s there is either going to be in the long term for my family, or for them because they want to buy that house. And maybe in a few years they can afford to do that because they’ve have a chance to put roots down in this city, and that’s what I think garden suites can turn into. They not going to be the panacea but they are going to be one way forward and I think we have to take that.”

Opening up the garden city to build more garden suites won’t solve the whole housing crisis, but it’s one of many bold policy changes we need to comprehensively tackle the problem. We look forward to working with the mayor and council to develop more solutions.

Our next step is to encourage Victoria and other CRD municipalities to ask the province to apply the 15 per cent foreign buyers’ tax to our region, too (it’s already in place in Metro Vancouver). There’s some resistance out there, but our best analysis suggests there’s no good reason not to. Stay tuned for more information. 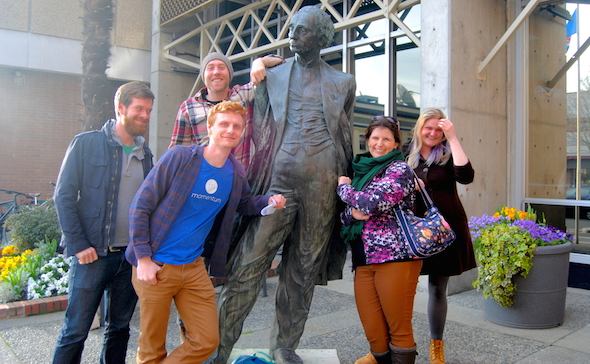