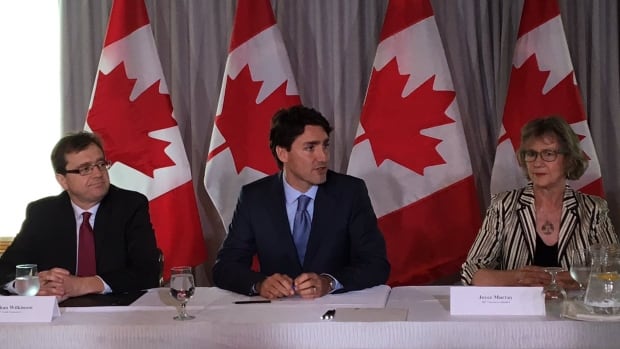 Gen Squeeze reps were among a small group invited to a consultation by Prime Minister Trudeau on June 17.  His aim was to diagnose the causes of the housing unaffordability crisis, and identify solutions. We made an impact, and have already been invited back for a more indepth conversation with the federal Minister responsible for Housing.

The Prime Minister began by signaling his intention to address urgently the housing problem that exists in Metro Vancouver.  We can take him at his word.  Just by convening the roundtable, he shows there is more concern at the federal level than has been seen in years.

The meeting lasted 90 minutes with around 18 guests speaking for 2-3 minutes each, and the Prime Minister primarily listening.  Mr. Trudeau committed to synthesize the information that was shared, feed that into the national housing strategy that is under development – and not wait too long to complete this work, because he recognizes there is urgency.  That said, there were no firm commitments to any specific next steps for process or policy change following this meeting.

Other invited guests included Gen Squeeze allies like the CEOs of the Vancity Credit Union, YWCA of Metro Vancouver, the BC Non-Profit Housing Association, along with other academics who shape our policy thinking.  It was also an important opportunity for relationship building, because there were Real Estate Association reps, Developers, and other non-profit reps, etc.

Gen Squeeze was one of the first groups invited to speak.  We supplied a briefing note featuring a summary of our #CodeRed study, along with Squeeze Stories from #CodeRed organizers like Andrea Stucchi, Russell Bonaguro, Nazma Lee, Julie Bond, Erin Kastner and Stephanie Goudriaan.  Their voices, concerns and suggested solutions have been delivered directly to the PM’s team, with the recommendation that their stories guide federal policy decisions in upcoming budgets.

In our oral remarks, we featured three themes from our #CodeRed study.

SECOND:  BC is to housing today what Saskatchewan was to medical care in the 1930s and 40s.  Back then, many Canadians could not afford a doctor – especially in Saskatchewan.  The gravity of circumstances in Saskatchewan motivated Tommy Douglas to dream differently for our country about how we might pay for and provide access to medical care.  Eventually, his dream awoke a nation to the broader pan-Canadian problem of unaffordable health care, and Prime Minister Pearson spread medical care from coast to coast.  Canadians now define ourselves in large part by a noble policy adaptation to a problem that first reached intolerable limits in a particular region.

We face a similar scenario today with respect to housing, and need a Prime Minister willing to adapt policy across the country.

THIRD: In addition to building on our housing-specific policy propositions, we acknowledged that it is difficult for government policy to solve housing unaffordability problems while protecting property values for existing home owners.  So we emphasized it is imperative for political parties to turn their attention to the broad range of costs squeezing young adults.  We can help ease the housing squeeze in part by no longer tolerating child care, parental leave, transportation, etc. adding up to second, third and fourth mortgage payments

Several others in the room echoed our points, referring specifically to the work of Gen Squeeze that you are all bringing to the attention of the public via #CodeRed organizing.  In addition, many others in the room came ready to make the case to tax housing wealth more fairly, increase supply of suitable homes for young singles and families in rental and as owners, and to tackle harmful implications from foreign investment – all in keeping with our #CodeRed housing policy propositions.

In the final remarks that Prime Minister Trudeau made to conclude the meeting, he singled out one set of comments that he heard – OURS – by referring to our idea that BC is to housing what Saskatchewan once was to medical care.

This signals how our organizing together is literally opening eyes, hearts and minds to the housing squeeze, including among key policy makers.  It REALLY IS POSSIBLE to ease the squeeze via policy adaptations.  Let’s keep growing the network that is organizing for, and microfinancing, #CodeRed, which in its earliest days is already having important influence.