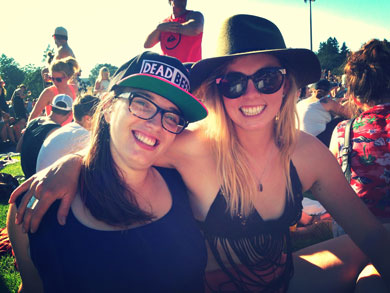 It has been a process for me to look at Generation Squeeze and take it seriously. Our grandparents lived through the depression, the generation before that was sent to war, having women work factories in the absence of young strong men in the workforce. I have never ate a lard sandwich. The only times that I've used candlelight to see what I am eating have been when I’m trying to create a romantic mood. My cousins and I have more education than any generation before us. If we think life is so tough, maybe we are just too entitled

So knowing that we are entitled, I have started to shift my perspective. I no longer allow the burden of student debts to feel heavy on my shoulders. In 30 years, I will not remember the exact year that I paid them off. So I do not let it bother me that I am not able to pay off as much as I would like to while I'm working contract jobs. Jobs that are not really connected to what I studied, or to my passions.

I have stopped dreaming of buying a house or land, like my parents did. I’m thinking about trying to buy land with a big group of people who have shared values and build tiny houses on it. The houses look pretty neat and maybe we can share some common space. Having a large home filled with things is no longer a goal; I can live by the less is more mantra. Owning a tiny house would give me more security than renting from landlords who charge expensive rent and can end my lease when it suits them. A tiny house would also mean I didn’t need to live with roommates.

Knowing the cost of child care and that I am entitled to think that I should get paid the same as my male counterparts, I will have to choose between career or children. Right now I am choosing career. If, when I’m in my 30’s or 40’s and change that decision, I have already considered adoption. Maybe adopting an older child... because they'll already be going to school and my career will not have to go through a 5 year hiatus as early childcare costs around $1000/month. Which will probably land me back into where I am now: contract hopping hoping to land something secure.

Living in an economy that is based on fossil fuels and resource extraction, I suppose I should feel entitled to think that I'm impervious to climate change. So knowing that I will probably have to face a large weather disturbance, I have water jugs in my basement that I refill with fresh water every few months. Enough canned goods to eat in case my gas gets cut. I do enjoy camping, but a part of learning how to survive in a tent and cook over a small stove is to have the “just in case” skills to make it through a storm or fire or earthquake.

I know that I am entitled to think I should have a car. This one is actually the easiest for me! I love biking, I live in a city with great public transit, and car shares. I can borrow my Mom’s car if I ever really need to use one with short notice. I also like that I have a bike that I can load up and bike 1500 km to where I grew up, where I can live off the land in case of a major weather event in Victoria.

As for savings, well I am someone who always likes to take care of herself. To think about the future. Yet I have not set up an RRSP yet. I could probably get away with putting $30 in it a month. I’ll put that on my to do list, right after getting my MSP all sorted out, oh man I should also go to the dentist for a check up…

This might sound a little tongue in cheek, but it’s not. This is just how everyday young Canadians have internalized the squeeze. We are adapting, and we will be fine, slowly drowning until we decided to go counter culture, buy second hand clothes, bike and work in co-working spaces on our 7 contracts.

I have a choice, our politicians have a choice, and we have a choice. We can create a society where we don’t have to choose between career or children, environment or economy. Where people spend more time doing what matters. Living. Instead of worrying about not having enough to make ends meet. Meeting life’s milestones with excitement, not nervous breakdowns.That is what the Generation Squeeze Lobby is about. To remind those teetering close to the edge that they are not alone, it’s not their fault, and we are squeezing back. But while we do that all we can, we can ask our government what do they value?

Ashleigh Kolla (at left in picture) is a GenSqueeze backer and a part of the Victoria Crowd. She enjoys biking, beers, breakfasts and books. When not on a roller coaster of emotion about how she will pay her student loans, finding permeant work, and a long term home, she enjoys singing with friends and laughing until her sides hurt.