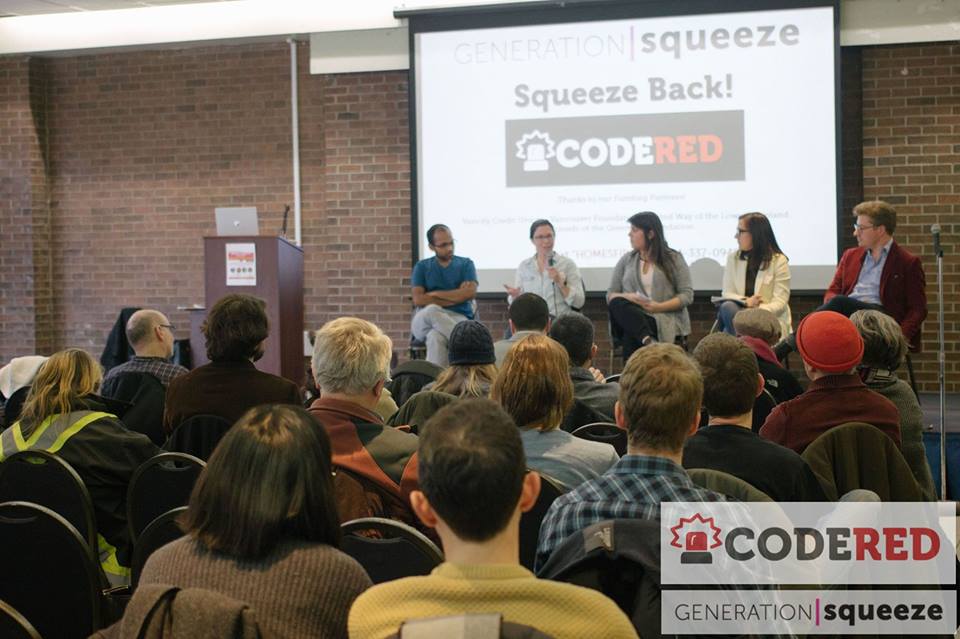 This letter is intended for distribution to City Council, and is prepared for the Executive Committee at its meeting of June 19, 2017.

Generation Squeeze has built a strong voice for Canadians in our 20s, 30s, 40s and the children we represent in the world of politics, and we have thousands of supporters in the City of Toronto.

We are delighted that the City’s Executive is considering the staff recommendation to undertake consultation about a Vacant Home Tax. We urge you to organize this consultation, and subsequently to implement the tax.

The tax is a necessary step in addressing the #CodeRed problem that Toronto’s economy fails younger generations as home prices leave our earnings behind. As reported in our recent academic study, “Ontario is the second worst economy in Canada for younger generations,” hard work now pays off less for young residents in Ontario by comparison with any province east of the Rockies. The problem is especially bad in Toronto.

In 1976-80, when members of today’s aging population were young adults, it took the typical 25-34 year old six years of full-time work to save a 20 per cent down payment on an average-priced home in the GTA. Now, the same aged young citizen must work 20 years if s/he is audacious enough to aspire for an average-priced home (which is far less often a house with a yard than it used to be).

After organizing the down payment, the typical younger resident of Toronto must allocate the earnings from months of additional work each year to pay the annual mortgage on an average-priced home by comparison with 1976-80 – even at historically low interest rates.

As a result, real estate trends in Toronto are crushing dreams of home ownership for many talented, well-educated, hard-working residents of Toronto. Their consolation prize? Work a month or so more each year just to pay average rents. Rents have been on the rise due to the scarcity in supply of rental units, and the escalation that results from rising home prices generally.

That is why a Vacant Home Tax is so important now in the City of Toronto. It has the potential to transition thousands of existing homes into the rental supply within a twelve month period, and at no cost to the public purse. By contrast, other government ambitions to build thousands of additional units cost the public purse hundreds of millions of dollars, and take years to get the supply on the market.

Given the harm being caused generations of young people in Toronto now, it is imperative that City Council make use of all available policy levers to address the #CodeRed problem of housing unaffordability, especially those levers that can make a dent in the problem most rapidly. An Empty Home Tax is critical in this regard.

Generation Squeezed worked collaboratively with the City of Vancouver, including the Mayor’s office, to propose, shape and implement its Empty Homes Tax. Indeed, Mayor Robertson invited Generation Squeeze to collaborate in its press conference announcing the new tax on vacant homes last fall.

As a result of this experience in Vancouver, we were pleased to be invited by Councillor Ana Bailão for input, and recommended the use of hydro and water data to estimate the number of empty homes in Toronto in order to provide a more conservative baseline than the 65,000 units suggested by the Census. We commend Councillor Bailão for having this recommendation implemented so efficiently, and applaud staff for executing it equally rapidly.

The new finding that between 15,000 and 27,000 homes in Toronto do not use electricity or water over an extended period of time is critical information, because it reinforces the importance of organizing Toronto housing policy around the concept of “Homes First. Investment Second.” This principle, which has been formally endorsed by the Mayor of

Vancouver, reminds us all that the primary purpose of a real estate market must be the efficient supply of suitable homes that are in reach for what typical people earn. It’s fabulous that people can make returns on real estate investments, but those returns must now be a secondary consideration to first keeping home prices in reach.

Whether they reside here or abroad, people who purchase homes for purposes other than to live in or rent out contribute to market forces that are driving housing prices beyond reach for a large, and growing, proportion of younger Canadians and newcomers to the country. So a tax designed to incentivize investors to rent out their homes to residents (not visitors via short-term rentals) is necessary. And it’s time for young and old alike to support such measures so that our city, province and country work for all generations.

The principal design criteria for the tax need not be revenue generation. The intention should be to create new incentives for owners of empty homes to add supply back into the market, especially for prospective renters. Given that approximately 15,000 to 17,000 units are built in Toronto each year, the City could theoretically transfer a year’s worth of supply into the system at once with the new tax. However, Generation Squeeze would encourage the city to anticipate that shifting into the rental market a smaller portion of the 15,000 to 28,0000 empty units identified by hydro and water data would represent a dramatic public policy success. For example, shifting even one-quarter of these units would achieve a healthy increase to rental vacancy rates.

In light of the above information, Generation Squeeze recommends that the City of Toronto:

In sum, Generation Squeeze applauds the City of Toronto for giving serious consideration to the value of implementing a new Vacant Homes Tax. While such a tax will not be sufficient to solve the #CodeRed problem of housing unaffordability in Toronto, it is a necessary, and bold, step toward a comprehensive solution. Our organization offers strong support for this bold step on behalf of the thousands of allies in Toronto who we represent, and we would be delighted to support you further with this important initiative.