Get Your Vote On
A metal anthem calling Canadians to the polls? Yes please. From frontman and Victoria transit driver Dewie Cook.
By Ryan Vande 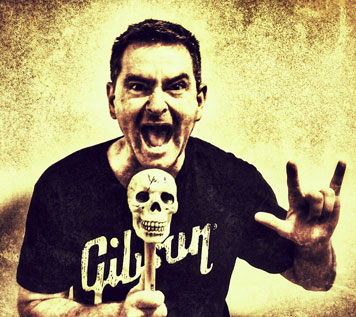 A Gen Squeeze metal anthem calling Canadians to the polls? Yes please. From frontman and Victoria transit driver David (Dewie) Cook. This one's for the ages.

In David's words: As transit driver for over 25 years I have a front row seat on the pulse of the province and I hear many interesting conversations from people from all walks of life. Victoria has a large University and College population and I transport hundreds of students on a daily basis. Sometimes I'll strike up a conversation with passengers/students whom are packed into the front of the bus on busy trips.

They become a bit of a captive audience but I try and challenge them to consider their civic duty and the importance of voting. I tell them “if you folks  vote maybe you won't have to stand here like a pack of sardines and you can have a seat”.

I am also the former political action rep for C.A.W. 333 and my duties included community outreach, conducting surveys, attending political forums and commission meetings. I had the opportunity to talk to politicians and track their positions on how public transit should be funded through fares or taxes etc. In some instances I worked with the student unions to push for affordability and better frequency of service.

I've always been a fan of metal music and started my first band when I was 16. In the 80's I toured with a number of club bands and have record three CDs with various projects over the years. I have always felt that heavy music was the best vehicle to convey your passion and anger due to the aggressive nature of the genre. I want to inspire folks to wake people up and put down their Starbucks coffee for a few minutes and get in the game. Apathy sucks and will never move young people to the life the deserve or their share of the pie.

The statistics are alarming when we hear that two thirds of young people who are eligible to vote don't and if they develop that habit within their first couple of opportunities it becomes a life long pattern. When we look at the cost of housing, child care, food, transportation and sky rocketing tuition, Canada's young adults are getting the short ends of the stick. Yes jobs are being created but they are mostly part time, short term contract, work experience or coop that pay minimum wage with no benefits.

I discovered Generation Squeeze from a friend a little over a year ago and found they were talking about many of the issues I believe in. I hope the song “Get Your Vote On” is another plank in the bridge to inspire meaningful action and political engagement.