The Gen Squeeze campaign talks a lot about the generational spending gap.  Canadian governments spend around $45k annually per retiree, compared to just $12k for each person under 45.  By making the comparison, some worry our intention may be to erode support for Canada’s seniors.  Or they worry we’re not attuned to the pressures facing our aging population.

Nothing could be further from the truth.  We don’t shine a light on the relatively generous government spending for retirees because we think it is a problem.  We know it is indicative of the solution, and inspires hope.  It shows our country has adapted public policy to address socioeconomic pressures facing entire generations in the past.  So we have ample evidence that we can do it again for younger Canadians today.

Defending medical care and retirement income security is personal for me.  My grandmother, Vivian Lawrence, turned 97 last December.  Gran is a big part of my present. She is fun, witty, intelligent.  We like going to pubs and restaurants together, walks along the lake 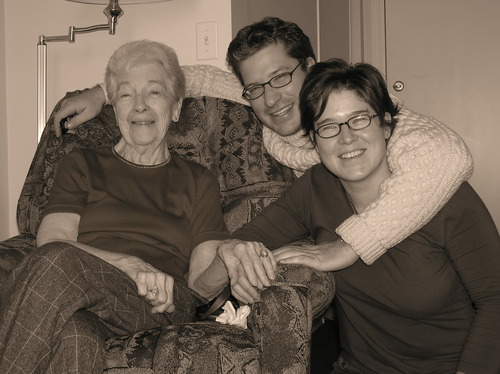 shore in Kelowna, drives to see the city lit up at night, walks through Art Knapps garden centres, talking politics, books, gardening, birds. (And I never thought I would get interested in birds!)  We love to share a glass of white wine in her room at the Abbey Field home for seniors, or if she’s feeling particularly feisty, a glass of Bushmills Irish whiskey.

Gran is also my time traveler.  She helps me understand what it was like to live through the Depression, the World Wars, before women had the vote in some parts of Canada, when divorce was so uncommon, when women faced greater barriers in employment, when radio was new technology – let alone TVs, computers, the internet, and now social media.  (But please don’t get her started on the pitfalls of using ‘tweet’ as a verb that has nothing to do with birds!)

At 97, her mind is still very sharp.  But she’ll admit that her body is failing.  Her hearing is deteriorating, as is her vision.  It’s harder to read, or even see the TV.  Her legs are shaky.  So her confidence to go out is eroding, especially on her own.  Problem is, her ‘young friends’ are often in their 80s too, struggling with their own health issues, and passing away.  With more time alone on her hands than any of us would like, she’s fastidious about keeping her windows superbly clean, permits no dust on her book shelf, is a whiz at solitaire, and watches too much of the weather channel!

Does Canada need strong pension and medical care systems?  You bet it does, because people like my grandmother rely on it. When I was born (1974), around 30 per cent of seniors were poor in Canada.  People were going bankrupt when they wound up sick at a hospital, they struggled with low incomes because their work lives produced insufficient savings, and many women didn’t have pensions of their own because they devoted their careers to raising families.

In response, Canadians asked our provincial and federal governments to build medical care and old age security.  These policy solutions in combination with a relatively strong economy enabled Canada to reduce the rate of poverty among seniors from 30 per cent to around 5 per cent today – lower than any other age group.

This policy success is personal to me.  Had Canadians not built public medical care and retirement income security systems, my grandmother may have been poor most of my life.  And since I’m the only family member in her life, reducing her risk of poverty on my own would have been nearly impossible, especially when I was younger.

As my grandmother’s medical representative, I negotiate the public health care and pension systems on a regular basis – interacting with her doctor, community health, the Emergency Room occasionally, and monitoring how much her CPP and OAS benefits rise with inflation.  I see these systems working pretty well a lot of the time, but can find them frustrating on occasion.  Like so many Canadians, I want our medical care and pension systems to use each dollar we allocate to them as efficiently as possible.  I want them to be better at supporting my grandmother to stay out of the hospital.  I want the systems to be dependable for her.

So does my gran.

But she also insists we can safeguard medical care and retirement income security without compromising those who follow in her footsteps.  She wants government budgets to give all generations a chance – including Gens X, Y and Millennials, who struggle with lower wages, higher costs of living, and environmental constraints on economic growth.

Such wisdom inspires the Generation Squeeze Campaign.  It’s why our movement includes a growing contingent of Seniors and Boomers who champion a Better Deal for their kids and grandchildren.

Paul Kershaw is the grandson of Vivian Lawrence, and founder of the Generation Squeeze Campaign