The kind of long-time homeowners we need on our side
These documentary film-makers from Oak Bay have a fascinating perspective on the affordability crisis, and they support measures to bring down the cost of housing.

I’ve known Heather MacAndrew and David Springbett since 2010. All through my roller coaster communications career spanning government, politics, and all kinds of civic engagement, they’ve been two of my favourite people to talk shop with. I’ve fist-pumped for Heather’s letters to the editor more times than I can count. David can fix, hack, or build most anything that crosses his path. They’re just fun people to explore ideas with and learn from. 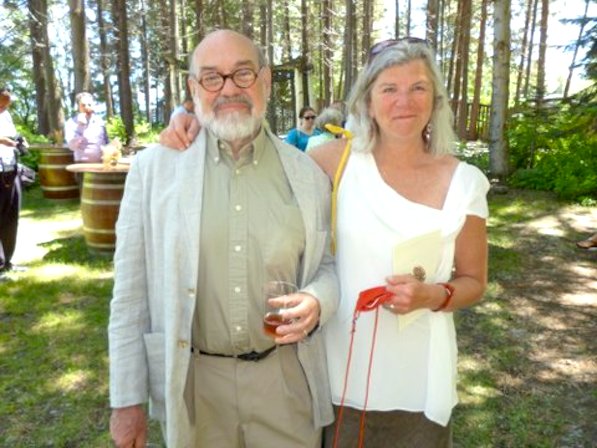 They’re also Oak Bay homeowners who’ve totally won out in the housing lottery in one of Victoria's most affluent neighbourhoods, but can still see the bigger picture and have a fascinating perspective on the affordability crisis. They’re exactly the kind of long-time homeowner we need on our side.

Heather and David are independent documentary film producers based out of Victoria who focus on social topics like urban living, food issues, international development, and housing. In 1997, they did a television series on different expressions of community that featured housing co-ops and co-housing in Victoria, Bainbridge Island, and Vancouver’s Downtown Eastside that uncovered a link between housing and health.

“Once you have secure housing, you can begin to solve all the other problems in your life much more easily. Secure housing offers stability -- mentally and physically. Governments can save hundreds of millions of dollars in other costs when people aren’t on welfare or when it comes to healthcare. These long-term costs aren’t being accounted for here,” David told me. He also sees glaring dysfunction in B.C.’s commercial housing market.

“The dramatic rise in housing prices has increased average wealth for older Canadians by over 100 per cent compared to those retiring in the mid-1970s. But the same prices crush the dream of homeownership for some of our kids, or impose very heavy debts on others.”

So they do what they can to help by keeping the rent of their small garden suite low for struggling university students. 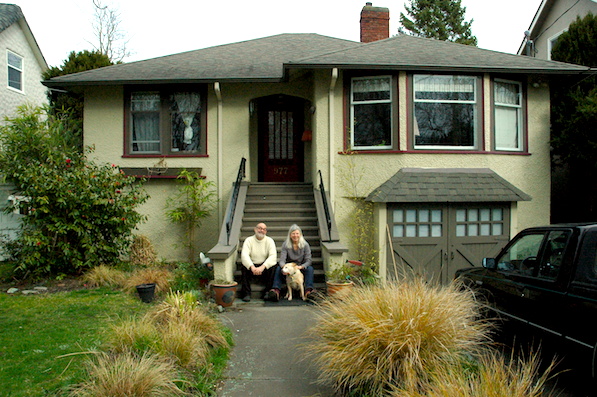 Heather and David with their dog Jersey outside of their Oak Bay home.

“We think garden suites could be part of the solution. We have a one-bedroom garden suite. It happened to be there when we moved in. Students have a really hard time finding affordable housing, so we keep the rent reasonable at $600,” Heather said.

Even though Heather and David have seen the value of their home more than triple since they purchased it back in 1993, to them the spike feels artificial and completely unrealistic.

“We totally support measures to bring down the cost of housing. The degree of inequality is dangerous. The bigger the gap between the rich and poor, the bigger problems you get. That’s how revolutions are started. We’re seeing that played out in the U.S. in unpredictable ways,” Heather told me. 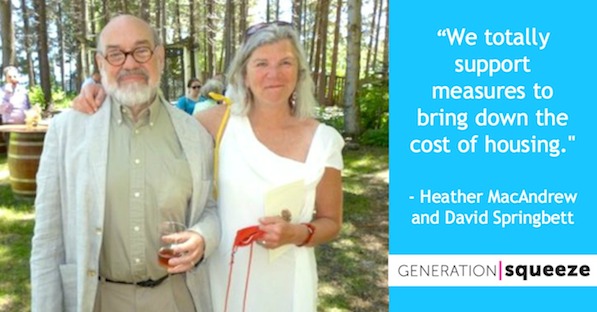 Heather describes themselves as being “house-rich, but cash-poor”, which is something some people might have a hard time wrapping their head around. If you’re suddenly house-rich, you can be cash-rich, right? Can’t these kinds of homeowners refinance if they don’t have enough money on hand?

“It is certainly an option. We have a healthy line of credit against the house for business loans. But it’s hardly been the freelancer brain -- there’s a psychological barrier to debt. We’re trying to keep it really low. Right now we’re considering doing the property tax deferral,” explains David.

At least it’s a psychological barrier. For those whose homeownership status is increasingly out of reach, sitting on property suddenly worth close to a million dollars might not feel very dire.

“I guess it’s because we’ve never had a secure income. We produce documentaries for television, but what gets commissioned is never assured. We take on little projects here and there. We’re very middle class people. There are no vacations. We’re kids of depression-era parents. We do have a new car though, that’s a concession!” Heather said.

“I buy reduced meat. Only day-old bread. It just means being careful all the time and counting our stars that we have been healthy. Of course we’re in a similar situation to anyone else who’s freelancing, but our advantage is that we’ve been doing it almost all our working lives. We know how to arrange things. We’ve always had to do it this way.”

Maybe it’s that freelancer, depression-era mentality that makes Heather and David so sympathetic to the struggles of today’s younger generation, and so willing to see their Oak Bay community modernized. 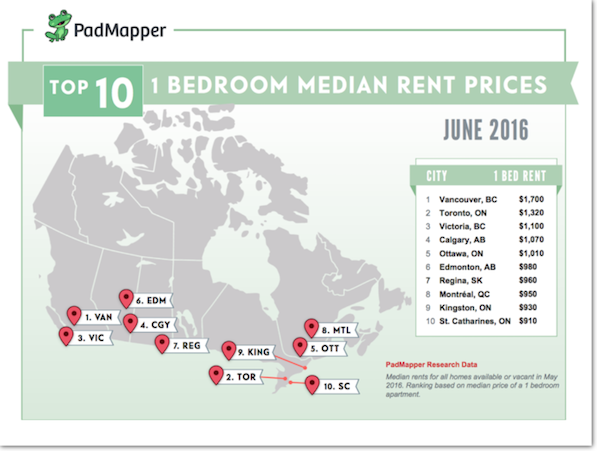 “Densification is often a good idea -- garden suites, tiny houses, container houses, laneway houses. There’s still resistance in thinking that every home needs a yard, and sometimes there’s resistance to ‘renters’ -- an attitude that seems irrational -- but that kind of thinking is going away a little bit. Of course it’s important to keep green spaces and community spaces. We’re seeing lots of boulevard gardens now,” David told me.

“We built a small office in the back yard for studio space but had to check with all of our neighbours first. As an accessory building, we weren’t allowed to plumb it with a kitchen (ie: no one is allowed to live there). But now, there are people in other municipalities who are converting garages for rentals.” 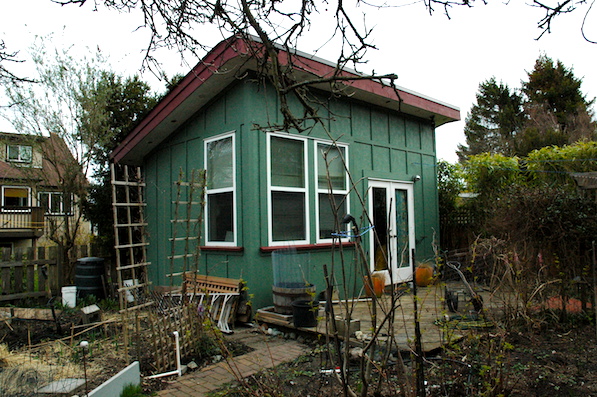 The accessory building Heather and David built for office space in their Oak Bay back yard.

Heather and David are two great examples of people who know whether you won out in the housing lottery or not, whether you’re older or younger, we can all face reality and work for fairness and change together. They believe what we need to do is encourage communities and local governments to make it easier to build more housing options into squeezed communities.

“The housing situation is a huge problem and innovative solutions will come up,” Heather told me. “There’s lots of opportunity for imagination.”