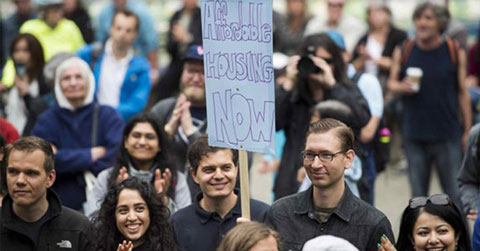 There are big differences in how the four national Parties would tackle the housing squeeze.  UPDATED OCTOBER 14.

Housing is a generational tipping point in Canada. High prices drive wealth accumulation for many of our parents and grandparents, while they crush dreams of home ownership for younger Canadians, or weigh us down with heavy debts or high rental costs.

The Conservative Party would increase from $25k to $35k the amount of tax-free money that first time home buyers can withdraw from their own RRSP savings to put towards their first home (or the home of a relative with a disability). This will benefit people who already had more than $25k saved in their RRSPs and were willing to roll those retirement savings into their first home.  Since younger Canadians earn thousands less for full-time work than in the past, have larger student debts and pay more expensive rents, many wouldn’t have that kind of money saved in their RRSPs and so wouldn’t be eligible.

The Home renovation credit is a much larger investment in total.  Still, it will only save households up to $750 in renovation costs.  Benefiting from these savings assumes that younger Canadians can cobble together the down payment and large monthly installments required to cover mortgages on housing that costs hundreds of thousands more today than in 1976.

The NDP will invest $700 million/year in housing

NDP housing commitments would primarily benefit non-profit and co-operative housing organizations and the individuals and families they serve, including low-income renters as well as renters who can afford market rates. Investing in grants and loans is important because incentives that rely solely on tax credits only benefit non-profit and co-op groups that already have capital available to invest in the first place.

The Liberal Party would implement a National Housing Strategy targeting a wider range of people than the Conservative plan. The Strategy would draw from a $20 billion dollar “social infrastructure” investment over 10 years, but the Liberals haven’t said how much money is specifically targeted to housing. The Liberals budget for social infrastructure investment (covering housing, seniors facilities, child care, culture/recreational infrastructure) would be $1.15 billion in 2019.   Given the four areas of focus, we estimate that one-quarter will go to housing, or $288 million. We add "ish" to our estimate above, in order to signal that we would prefer more concrete numbers to report.

With that $288 million-ish, the Liberals want to renew federal leadership in housing by building more housing units, refurbishing existing ones, renewing current co-operative agreements, and providing operational funding support for municipalities, including renewing support for so-called Housing First initiatives that help homeless Canadians find stable housing.  The Liberals will also conduct an inventory of available federal lands and buildings that could be repurposed, and make some of this land is available at low cost for affordable housing in communities where there is a pressing need.

The Liberals promise $125 million more per year to eliminate all GST owed on new capital investments in affordable rental housing, and to provide tax incentives to increase and substantially renovate the supply of rental housing across Canada.  It’s unclear whether $125 million is enough to have a dramatic impact on the availability of rental stock.  Further details are required from the Liberal Party.

Finally, similar to the Conservatives, the Liberals indicate they will create more flexibility for people to draw on their RRSP savings for the purpose of purchasing a home throughout their lives.  At a cost of $5 million annually, this promise is minor, and could suffer the same deficiencies identified above.

The primary beneficiaries of Liberal policies would be builders and owners of rental housing and those they serve, including low-income renters as well as those who can afford market rates; co-operative housing organizations and those they serve; municipalities and homeless Canadians; homebuyers with RRSP savings.  Overall, the Liberal plan may benefit the widest diversity of people, but the investment is lower (and unclear) compared to the other parties.

The Greens will invest $2.4 billion/year in housing.

Like the Liberals, the Greens promise a National Affordable Housing Strategy, but they would invest more money than any other Party.

The Greens intend their Housing Strategy to address a continuum of needs:  “from social housing for those in poverty or dealing with mental health and addiction problems, to First Nations, Metis, and Inuit housing crises, to the market failures depriving those with even a decent income of access to the affordable housing they need.”

But the overall language in the Green platform reveals that it has two primary housing priorities.  The first is poverty reduction, emphasizing Housing First principles to respond to street homelessness and housing on reserves.  The second is improving the energy efficiency of Canadian households.  The Green budget for this goal is markedly larger than the NDP, but smaller than the Conservatives renovation tax credit.  The latter, however, subsidizes any renovation, as opposed to those that focus on energy efficiency.

Gen Squeeze has long argued that it is difficult for governments to influence substantially the price of housing at the level of the entire population, because prices are driven primarily by supply and demand forces beyond the reach of governments.

As a result, we have emphasized that it IS in the control of governments to ensure that Canadians in their 20s, 30 and 40s don’t lose the equivalent of a second mortgage from their income when they share time at home with a new baby, to ensure child care services don’t cost the equivalent of a third mortgage, and postsecondary doesn’t leave debts that are larger than a generation ago, even though postsecondary often leads to jobs that pay less than in the past.

See our BY THE NUMBERS: a generational guide to voting in the 2015 federal election for our comparison of the party platforms on these issues; or check out our Election Intel webpage, aka Codename Swamplight.