Are people who live in homes worth $1 million wealthy?

This post is the second in a series of blogs meant to highlight results from a poll commissioned by Gen Squeeze to gauge public sentiments about housing wealth. You can read the first blog here.

Last week we shared poll findings which show that a majority of Canadians acknowledge that rising home prices benefit owners by growing their wealth. Canadians living in homes valued above $750k are most likely to affirm this, indicating they recognize their financial good fortune. That’s an important place to start, because Canadian home owners – especially older folks who bought into the market decades ago – have gained more than $3 trillion in housing wealth since the 1970s. Unlike wealth from wages and stock market returns, this housing wealth is sheltered from taxation.

Yet the poll we commissioned shows that a sizable minority of Canadians view housing wealth differently than wealth from other sources – especially when this housing wealth is held by retirees. This attitude stands in the way of policy solutions for generational fairness.  In particular, it’s harder to make the case for tapping into a small amount of housing wealth windfalls to create more affordable housing, or pay for services retirees want like long-term care and pharmacare.

Chart 1:  All things considered, do you agree or disagree with the following statement?  Rising real estate prices benefit many people who already own a home by growing their wealth.

The fact that a majority of Canadians recognize that rising home prices bestow financial benefits on home owners suggests that our understanding of wealth isn’t just about the income one earns. Housing status matters too.  We designed poll questions to explore how perceptions of wealth are influenced by one’s age, status as renter or owner, housing debt, and income.

Specifically, we asked Canadians to consider the financial wellbeing of two different households:

Unsurprisingly, barely anyone (10%) thinks a retired renter with a poverty-line income is wealthy. And most (83%) think that a young person with $250k annual income in a fully paid-for home worth $1 million is wealthy.

More interesting is that almost half of Canadians (47%) think retirees are wealthy when they have a small $22k pension income residing in a million-dollar home they own outright – a figure that rises to 58% when the home is valued at $2 million.  This shows that most Canadians view affluence as a combination of income and housing equity. Interestingly, younger people are more likely than other age groups to view the retiree in either of these housing scenarios as wealthy. This likely reflects the greater challenges younger people now experience when they aspire to home ownership, by comparison with several decades ago when Baby Boomers started out as young adults.

While the majority of Canadians consider housing equity enough to move people into the ‘wealthy’ category (regardless of income), a sizeable minority still focus on income alone as it relates to older Canadians. About one-third of Canadians consider retirees with low-incomes owning a debt-free $1M or $2M home as very or moderately poor.  This is somewhat surprising… at Gen Squeeze we know that many young people would be excited to experience that kind of ‘poverty’!

The interaction between income and housing wealth also shapes perceptions of wealth for high-earning younger residents.  A minority (41%) think a young person earning $250k (which places them among the top few percent of earnings) is ‘wealthy’ if this person owes $900k on a mortgage for a $1 million home. We were somewhat surprised to learn that more Canadians (63%) view a young high-earning renter to be ‘wealthy’ than the homeowner with the large mortgage – even though owners tend to have greater control over their housing situation.

Canadians aren’t sure about how highly-leveraged home ownership contributes to financial welfare. Responses were almost evenly split about the wealth (41%) or poverty (39%) of the top-earning but heavily indebted young person. It’s notable that more people think the income-poor but house-rich senior is wealthy (47%), compared to the largely indebted but high-income young earner (41%).

Chart 2. Would you consider each of the following people as wealthy or poor? 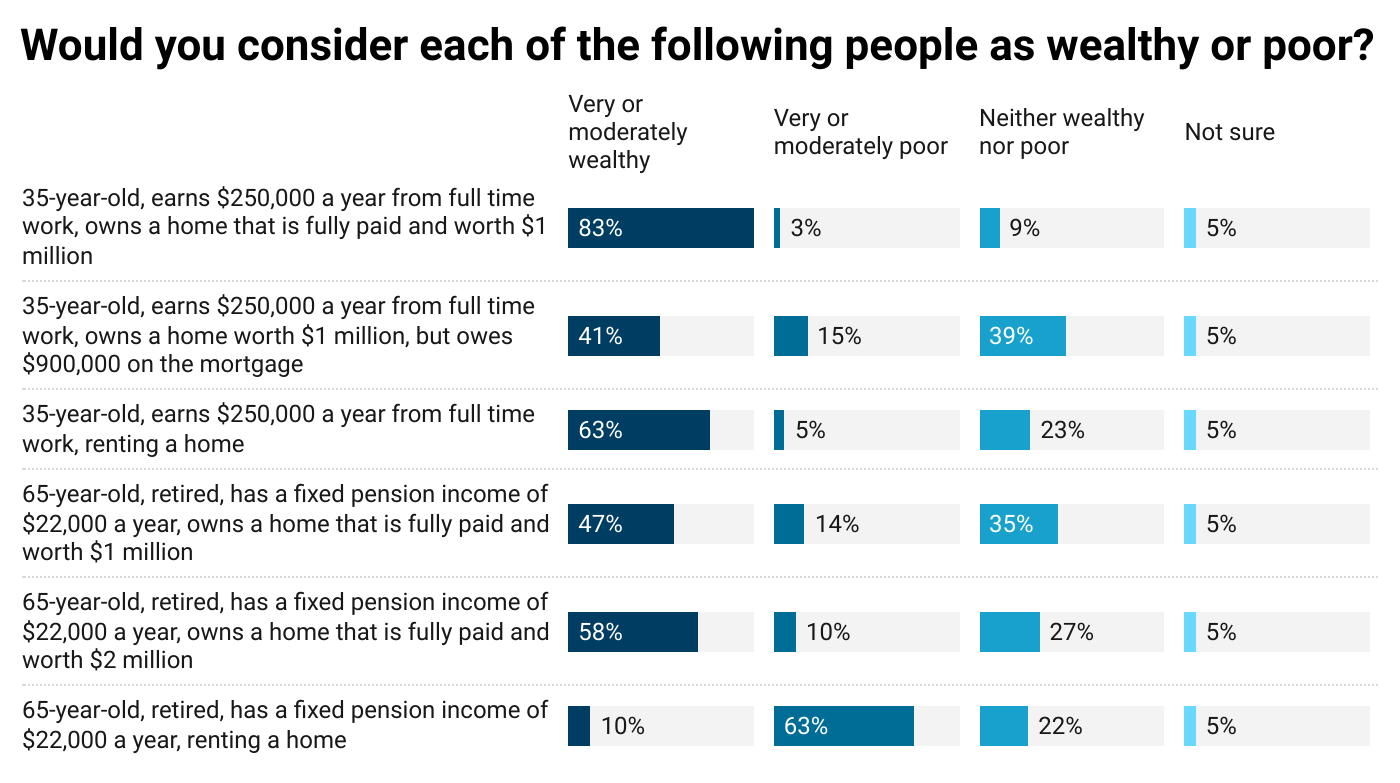 What the data tell us about perceptions of wealth in Canada

All in all, survey data confirm that owning a home is an important marker of wealth in Canada.  Many Canadians believe that home ownership grows one’s wealth, even if a home is not owned outright.  That’s good motivation for policy makers struggling to design effective levers to rein in runaway home prices that have left earnings far behind.

But survey findings also underscore some interesting conundrums in attitudes about wealth.

A person is less likely to be seen as wealthy once they take on debt to acquire a home… even though a majority of Canadians recognize that home owners benefit from rising prices as a path to accumulate wealth.  Canadians are more likely to think renters are wealthy compared to owners with big mortgages, even though renters must ‘pay as you go’ with no financial return, and face escalating rental costs as home and land values increase.

About half of Canadians view retirees with lots of home equity as wealthy regardless of their income – while around a third think low-income retirees with $1 million-plus in housing equity are poor.  While these data clearly show that Canadians are more likely to acknowledge the affluence of retirees with considerable housing wealth, there remains work to do to disrupt strong cultural biases about the ‘vulnerability’ of seniors living on (low) fixed incomes, even when they own high-value homes.

As we address these biases, it’s important to remember that many older owners bought into the housing market decades ago, and as such have enjoyed wealth windfalls from spiraling home prices over many years.  While most still had to work hard to afford their homes in the first place, it was nonetheless good fortune to have entered the housing market at such an opportune moment.  Such good fortune no longer exists for younger residents starting out in the housing system today – in part, because the affordability that once existed has been converted into the housing wealth windfalls for those who came before them.

We hope you'll join Gen Squeeze in talking about who’s wealthy in Canada, and what place housing should play in our views of wealth.