It’s Time to Start Taxing Housing Wealth — Like Now!
We need to start reimagining how we tax the recent surge in housing wealth, especially compared to how we tax incomes, which have remained stagnant for many Canadians.

In the spring of 2015, when Generation Squeeze was busy helping to organize what would be the largest affordable housing rally in the province’s history, Matthew Rognlie, a 26 year old grad student at the Massachusetts Institute of Technology (MIT) was busy writing what The Economist says “several reputable economists regard as the most serious and substantive critique that Thomas Piketty’s book, Capital in the 21st Century, has yet faced.”

What does that have to do with Canada’s housing affordability crisis? A lot, if you believe rising housing prices have anything to do with wealth inequality. And a lot more if you believe good policy solutions depend upon a true understanding of what feeds inequality (especially, generational inequality).

You don’t have to be a finance nerd to have heard of Thomas Piketty. His book, Capital in the 21st Century was published in 2013, in the wake of the 2008 financial crisis brought about by the American housing market crash, when more than just geeky economists were becoming wise to problems brought on by the spread of global inequality.

Essentially, Piketty explained what he believed to be the causes of rising economic inequality and its looming threat to our global social and economic stability. Anger began to rise and was directed mostly at “the 1%”, those rich CEOs and hedge-fund managers on Wall Street.

Hundreds of thousands joined the “Occupy Wall Street” movement to protest an economic system that was no longer working. It was no surprise that the vast majority of “occupiers” were in their 20s and 30s, those especially burdened by low wages, lack of stable jobs, increasing tuition costs and skyrocketing housing prices.

One of Piketty’s proposals to address the growing wealth gap and the shrinking middle class was to implement a global tax on individual wealth of up to 10% a year. The idea was largely left unchallenged until Matthew Rognlie’s 2015 paper, Deciphering the fall and rise in the net capital share, which challenges us to ask what the economic drivers of wealth inequality really look like.

Is rising inequality caused by ridiculously high salaries and undeserved bonuses or do we need to look deeper? What if wealth itself isn’t the problem, but a more specific type of wealth? It’s not that Piketty got it wrong. Rognlie argues that maybe he just didn’t get it totally right.

A surge in housing wealth

The Economist magazine outlines Rognlie’s main criticism of Piketty’s book “Inequality may not grow in the way Piketty predicts… the growing share of national income deriving from capital income has not been distributed equally across all sectors... The return on non-housing wealth, in fact, has been remarkably stable since 1970 (see chart). Instead, surging house prices are almost entirely responsible for growing returns on capital.” 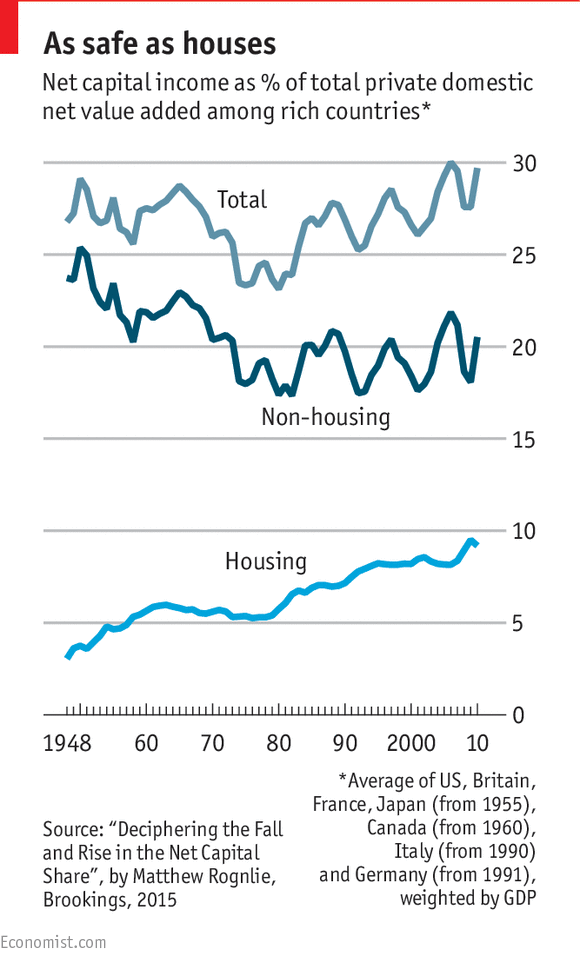 This observation that it is homeowners in particular who are grabbing the largest share of the pie has enormous implications for public policy. “Housing’s central role in the long-term behavior of the aggregate net capital share has… not been emphasized elsewhere… Observers concerned about the distribution of income should keep an eye on housing costs,” Rognlie writes.

The young MIT graduate student doesn’t, of course, offer any recommendations for policy reform in a Canadian context, but that’s where Generation Squeeze comes in. Matt Kieltyka, a senior reporter for Metro Vancouver spoke to Dr. Paul Kershaw, founder of Generation Squeeze, on this topic, in the fall of 2016.

“One of the recommendations proposed by Generation Squeeze to address generational inequality in the housing market is a radical rethink of Canada’s tax system. Paul Kershaw explains that taxing housing wealth, especially off the back of the massive returns made by homeowners in the past decade, may be more fair than taxing people’s income.”

“We need to increasingly factor in the reality that in the new world where economies don’t grow like they did in the 50s and 60s, real estate and other kinds of capital are larger these days than the increase in wages. And now we have to adapt our approach to taxation. We need ways of raising revenues and housing is at the center of that.”

This type of shift in tax policy is undoubtedly controversial but has been gaining popularity, especially in the wake of what many are calling Vancouver’s less-than-successful foreign buyers and empty home taxes. It’s obvious more government-initiated policy adaptations are badly needed to effectively address Canada’s growing housing affordability crisis. If you’re not a fan of a simple capital gains tax, there are plenty of other options. The Vancouver Sun’s Douglas Todd has already described four of them: A smarter tax would ease Vancouver's housing crisis.

The bottom line is we need to start reimagining how we tax housing wealth, especially as compared to how we tax income. Not only as a way to close the gap between the haves and the have-nots, but as a much needed revenue source for the large amounts of funds needed for ambitious and costly federal initiatives like universal childcare, tuition support and housing subsidies -- all projects that would help ease the financial squeeze that is disproportionately burdening young Canadians.