Life after a Vancouver renoviction
Lucas Gallagher was evicted from his Vancouver home under the pretence that the building needed renovations. But those never occurred. Will the new RTB funding help stop illegal evictions?
By Ryan Vandecasteyen 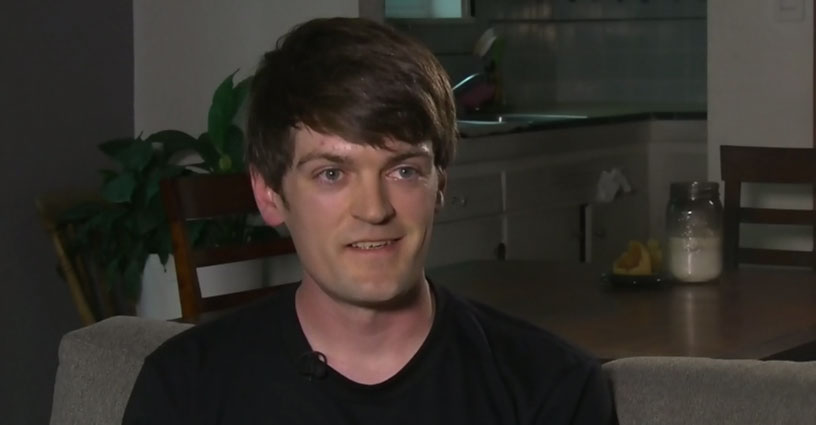 Lucas Gallagher and his partner Terran Bell were served an eviction notice from their Vancouver home in the Fraser/Braodway area in June of 2016, and then again two more times before their final boot in January of this year. Lucas says the first time there was no cause — it was under the pretence that their unit needed renovations and without any permits.

But the owners refused to back down.

They came back with the permits and more eviction notices. Back in 1992, the building foundation sank and the floors weren’t level. The owners said it would require major renovations to fix the building, and that was it — the tenants lost their case and everyone had to be out.

Except those major renovations never occurred.

“I was keeping an eye on the building after we were forced out. There weren't any signs of work being done for about two months. Then I started to see a panel van parked there at night and could see two old guys doing some work. The permits they got from the city were for helical piles, which is a process of drilling under the building and raising portions of it up until it is level. This is the level of work necessary to justify an eviction notice. But there was never any digging or large equipment at the building and it sits as crooked today as ever.”

Lucas saw the units posted online available for May 1st and went to the building for a viewing. The only building improvements he could see were new countertops and a fresh coat of paint — and a 100% increase in the cost of rent with heat no longer included.

“The guy I was talking to said I could move in right away or on the first, but that renovations were ‘ongoing’. It was weird. He told me they were allowing dogs and that was their ‘angle’, but he had no idea who I was — he only thought I wanted to live there.”

Going through all the prescribed channels and filing disputes with the Residential Tenancy Branch (RTB) as a lead applicant on behalf of himself and seven other tenants in the building, Lucas had to pour an incredible amount of time and effort into fighting the eviction.

“Every step of getting information and submitting forms means going through a slow bureaucratic office, and even a simple question takes an hour to get through. Financially, I had to take off several days of work to deal with things, as well as submission fees, postage, and printing fees — not to mention the moving expenses.”

Lucas and Terran had lived in their old apartment for five years and during that time, rental costs skyrocketed and supply dwindled. They found countless posts for places that looked decent online, but found them to be quite awful upon viewing.

“It’s become a daily stress not knowing when we might lose our home. The huge stress has had negative impacts on all aspects of our lives. And it still has major lasting effects on my feeling of home and the outlook for livability in this city.”

“It's something we talk about with our neighbours now: ‘When do you think we're going to be renovicted?’ It has made me feel like there is no future for me in Vancouver.”

Lucas’ biggest takeaway from the experience is that tenants need a drastic improvement in support from all levels of government.

“Vancouver created a 'tenant relocation policy' that should have provided us with resources and challenged the owner's eviction attempts. While this policy looks good on paper, it’s not enforceable and landlords are only encouraged to follow the guidelines, but are in no way held to it. It’s within the city's power to add a check to the permitting process, but nope. I reached out to several city councillors for help and clarity on the policy, and no one returned my inquiries.”

A lack of resources

“They say you have to do everything for yourself, but then their own staff aren’t properly equipped. No one in the office had the resources to actually help and it’s like no one wants to be there.”

Lucas and Terran are far from alone in their experience, as reports of unethical evictions in Vancouver are on the rise. In response to this growing crisis, The BC NDP announced new funding in their recent budget update for the overtaxed and severely backlogged RTB.

In the past two years alone, the number of calls to the RTB has increased by over 20 per cent. During that time, the RTB has experienced “high staff turnover, job vacancies and complaints about service standards.”

Get the full scoop:

Dan Fumano: Calls up and staffing down at B.C.'s renter protection agency
(1 of 2)

The BC NDP have committed $7 million in new RTB funding over the next three years, of which $3 million will be injected in the next fiscal year, signifying the branch’s largest budget in over a decade. Funding will go toward:

One element of the budget update that folks like Lucas Gallagher and other renovicted Vancouverites might find most exciting is the introduction of a dedicated unit to investigate non-compliance with tenancy legislation.

Right now bad landlords can easily get away with illegal evictions as they rarely face penalties for breaking the rules — able to abuse the system over and over again, going completely undetected. The new unit will go after the serial abusers and hopefully catch landlords who are evicting tenants on fraudulent grounds.

These are welcome changes that are long overdue in Vancouver’s housing crisis. Lucas says that most of the buildings in his area have been renovated or torn down and rebuilt.

“The growing strain on the young and working class is palpable. The culture of Vancouver is dying.”

A full service digital creative agency that's all about working with the people and organizations that protect our planet and make the world a better place.
Vancouver, Renoviction, Lower Mainland
Life after a Vancouver renoviction
Life after a Vancouver renoviction
Check out Generation Squeeze. I just joined.
Read the blog at Generation Squeeze
Latest News & Resources (archive)