B.C.'s economy is failing young people
In 2017, B.C. had the worst performing economy in the country for Canadians in their 20s to 40s. We created this 8-part infographic to explain what's going on.

Why we made this infographic


In the lead up to the 2017 B.C. election, we heard a lot about B.C. having the strongest economy in the country. And on behalf of hundreds of thousands of squeezed younger residents across the province, we felt we needed to respectfully challenge that claim.

We need all parties to understand & acknowledge how much B.C.'s economy has deteriorated for younger people. 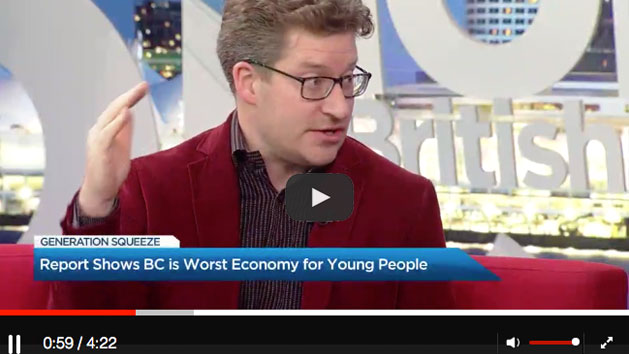 Generation Squeeze is a force for intergenerational fairness, to improve Canada’s wellbeing, powered by the younger voices and backed by cutting edge research.
Infographics
In 2017, B.C. had the worst performing economy in the country from the perspective of younger Canadians
B.C.'s economy is failing young people
Check out Generation Squeeze. I just joined.
Read the blog at Generation Squeeze 2
News & Resources