The study shows just how far each party’s election promises go towards ensuring all Canadians benefit from holding climate change to 1.5 degrees Celsius – which science shows will shelter Canadians from the worst that the climate emergency will otherwise inflict on human health and the economy.

“A lot has been said about climate change during this election period. It can be difficult for everyday Canadians to understand what party promises will achieve,” said Dr. Paul Kershaw, University of BC professor and Founder of Generation Squeeze – a research and advocacy organization for younger Canadians.

“Our goal is to help voters make sense of these election promises and understand which ones have the best chance of reducing the very serious risks of climate change.” 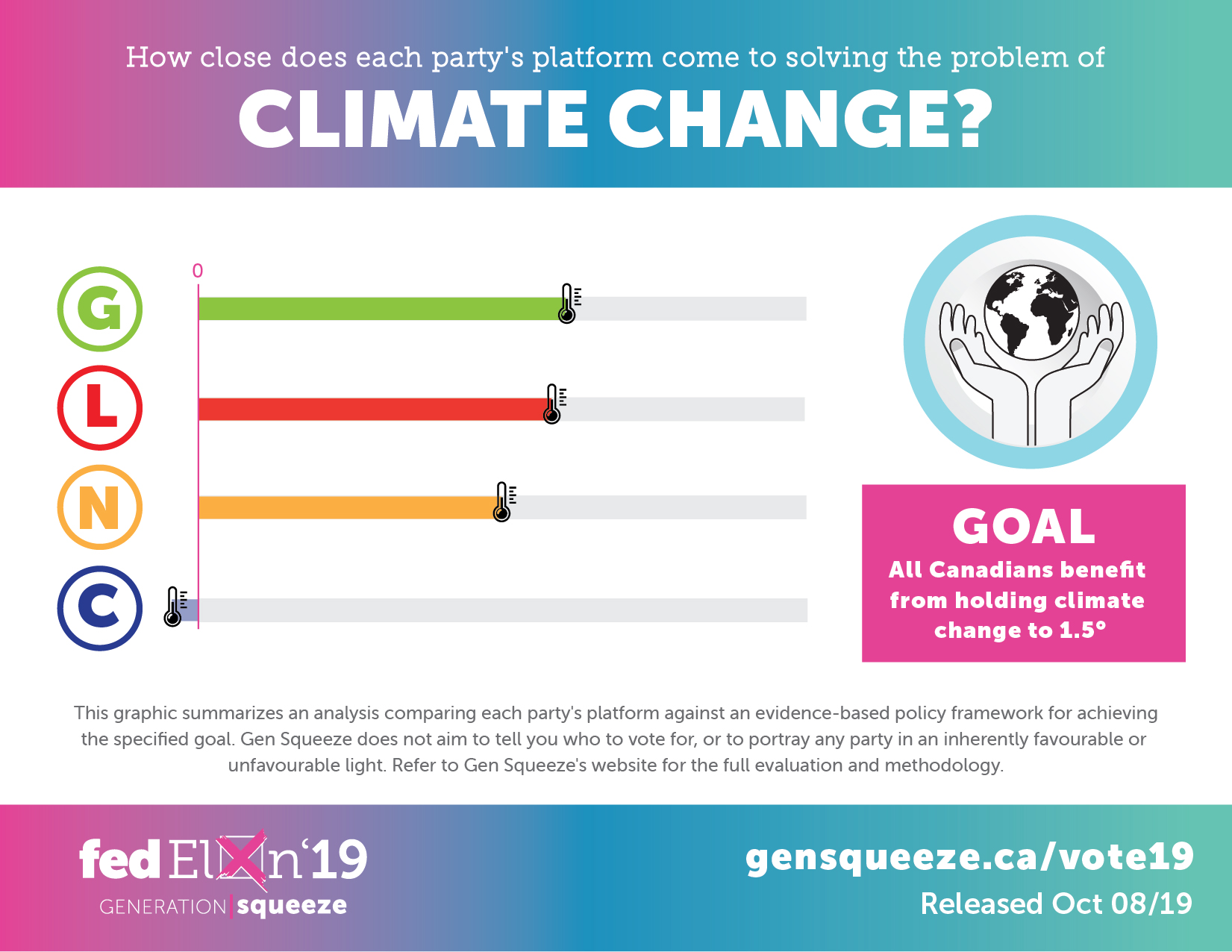 The Generation Squeeze Lab, run by Dr. Kershaw at the UBC School of Population & Public Health, collaborated with environmental economist Dave Sawyer to conduct the climate platform analysis. Dave Sawyer is an internationally recognized expert on climate policy who runs EnviroEconomics and is a Fellow at the Carleton University School of Public Policy and Administration.

The analysis scored each party’s commitments based on an evidence-driven policy framework that identifies 24 specific objectives, organized around four themes:  upgrade our lives; mobilize the market; put Canadians at the forefront; and weather the storm. The results are distilled into a score out of 10, supported by detailed commentary.

The findings show that the Green and Liberal platforms would move Canada furthest toward the goal that all Canadians benefit from holding climate change to 1.5 degrees. However, even these platforms require stronger commitments to achieve the goal.

The Green platform stands apart from the others by proposing the only plan to reduce Canada’s carbon emissions to a level in 2030 (60% below 2005 levels) that is recommended based on the science published by the Intergovernmental Panel on Climate Change (IPCC).  The strength of the Green platform is the urgency with which it will implement incentives to decarbonize our economy.

The Liberal platform doesn’t embrace the IPCC recommendation for 2030. But it does include a number of policy mechanisms that are important for fighting the climate emergency, which bring its score close to the Green Party. These include the Clean Fuel Standards and clean technology tax breaks, along with its national backstop price on pollution (for which compensating income tax cuts leave most households better off). The Liberal platform had its score reduced because of its purchase of the Trans Mountain pipeline, which runs contrary to evidence encouraging elimination of subsidies for fossil fuel industries.

The NDP platform would also advance Canadians towards the goal that we all benefit from holding climate change to 1.5 degrees, but it receives a lower score than the Green and Liberal platforms. The NDP platform presently does not include the same level of clarity about how it will achieve 100% clean electricity generation by 2030; clean up the energy systems of major industrial emitters; or promote zero emissions from industrial and other buildings in addition to the housing sector.

The study finds the Conservative platform will not move Canada closer to the goal that we all benefit from holding climate change to 1.5 degrees, which results in its platform scoring far behind the other three. There are strengths in the Conservative platform from which other parties can learn, including its emphasis on research and development, the export of Canadian technology, as well as the development of green investment products. However, these strengths are undermined by the Conservative promise to deviate from the evidence by eliminating pollution pricing and the Clean Fuel Standard, along with failure to adopt sufficient policies to help communities advance smart land use and zero waste.

“Perhaps the most important finding from our study,” explains Dr. Kershaw, “is that enough good policy ideas are embraced across the four main parties to address the climate emergency if we combine their respective strengths. We can’t reduce this climate crisis by doing just one, or even three, things. There are many policy levers we need to pull, and the climate doesn’t care from which parties good ideas come.”

Generation Squeeze released this climate platform study as part of its downloadable Voter Guide, which also includes platform evaluations of housing affordability, family affordability, and intergenerational fairness in government budgeting. The analyses will be updated as parties continue to make announcements and release additional information in advance of voting days.