New federal election study on wellbeing budgets
Lab at UBC assesses whether parties promote wellbeing for all generations, from the early years onwards

Led by Dr. Paul Kershaw, the Generation Squeeze Research and Knowledge Translation Lab, located in the University of BC School of Population & Public Health, is releasing the next installment of its Federal Election Voters Guide – a new study that investigates the degree to which the Conservative, Green, Liberal and NDP platforms prioritize promoting wellbeing as Canada transitions through, and hopefully beyond, the pandemic. It aims to answer two questions:

All parties fail to invest urgently for young and old alike

The four national parties ignore evidence about how best to promote wellbeing for all generations – with the result being that all parties don’t invest fairly in young and old alike.

All parties fail to invest in illness prevention, particularly for younger Canadians. Significant new health expenditures prioritize investing in medical care, to treat people after they fall ill. The evidence confirms that this is both more costly, and less effective.

Research shows that health does not start with medical care. Health starts where we are born, grow, live, work and age. Unfortunately, the parties consistently ignore research showing that government spending on social programs (e.g., poverty reduction, housing, child care, etc.) has a stronger association with life expectancy and fewer years of lost life than does public investment in medical care.

None of the parties promise to raise revenue fairly between generations. The platforms invite older Canadians to expect more spending on medical care, retirement income, and long-term care – but not to expect to have to pay for many of these improvements.

Parties fail to acknowledge that when we started medical care and retirement income programs decades ago, there were 7 workers for every senior. Now there are fewer than 4 workers. This means that today’s retirees did pay taxes for medical care and Old Age Security throughout their working lives – but not at levels that anticipated their own usage of these program in retirement. If we don’t re-design revenue strategies to address this concern, many of the bills for new medical and retirement income spending will continue to be kicked down the road, for the kids and grandkids of today’s seniors.

We are already seeing the result. No party promises to balance government books – even 4 years from now, when we don’t expect to be in a recession! The parties don’t appear to be concerned about the prospect of heaping more debt on to younger Canadians, despite the fact that government debts were already 3 times larger for Canadians under age 45 before the pandemic started – compared to when today’s aging population started out as young adults.

Even though all parties anticipate deficits for many years to come, it’s not because we will be making transformational investments to fight climate change, or address housing unaffordability – issues that are squeezing younger generations. Instead, forecasted deficits are consistently similar in size to the increased investment parties propose for old age security and medical care for the aging population.

Why do political parties think they can only win older votes if they don’t ask older Canadians (who have more wealth than any other age group) to pay a fair share for the improved services and benefits they want?

There are a couple of intergenerational bright spots. Three of four parties propose putting a high enough price on pollution to help younger Canadians and future generations have a fighting chance to fend off the worst that climate change has in store. Three of four parties also propose to invest enough to make $10 a day child care a reality.

When it comes to promoting wellbeing via government budgets that work for all generations, here is how the platforms compare overall:

It’s clear that we need to tell all of our political leaders to redesign their budgets to ensure that they promote wellbeing for all generations. This means urgently investing for young and old alike – and expecting young and old alike to help pay for these investments in a realistic way – so that we can all leave as much behind as we inherited.

Let this be the last election where parties judge they can get away with platforms that undermine intergenerational fairness, rather than promote wellbeing from the early years onwards. 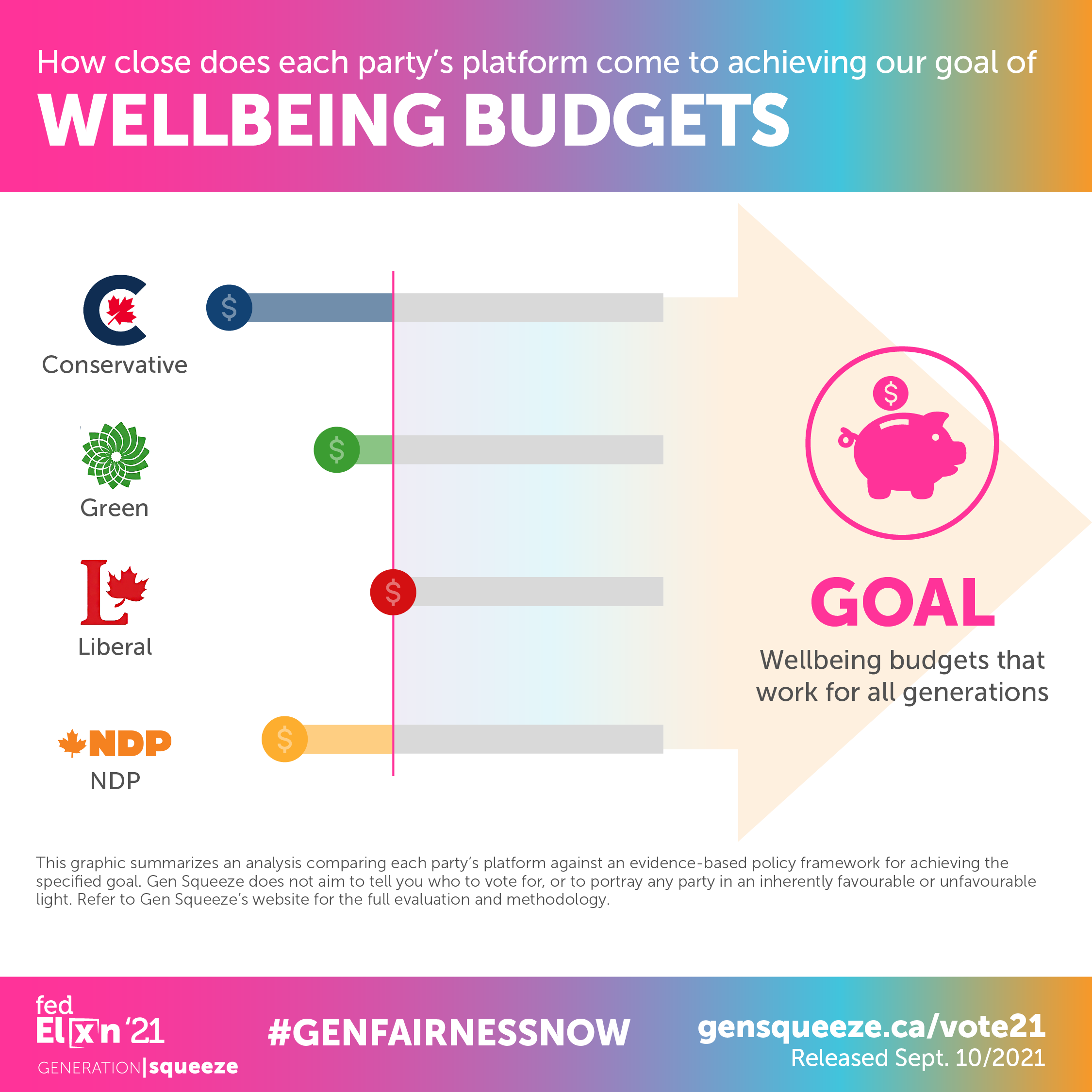