New age analysis risks missing the forest for the trees

For the last four years, Gen Squeeze has been asking the federal government to report on age trends in public finance. We've wanted more analysis and transparency about the intergenerational impacts of budget decisions, and the degree to which governments are currently budgeting for young and old alike.

No Canadian government has made a comparable effort before, and it puts us on a firmer path towards a Canada that works for all generations. For this, the government should be proud.

But that path has also been bumpy, and there are some serious problems with the generational analysis introduced in budget 2019.

New age analysis misses the forest for the trees

This year, every individual budget measure was assessed in terms of whether it was primarily impacting younger or older Canadians. That's a clean and helpful approach. It's akin to looking at what’s happening to every tree in a forest.

However, the weakness of that approach is that it doesn’t tell us what’s happening to the forest overall. On its own, it misses the big picture. 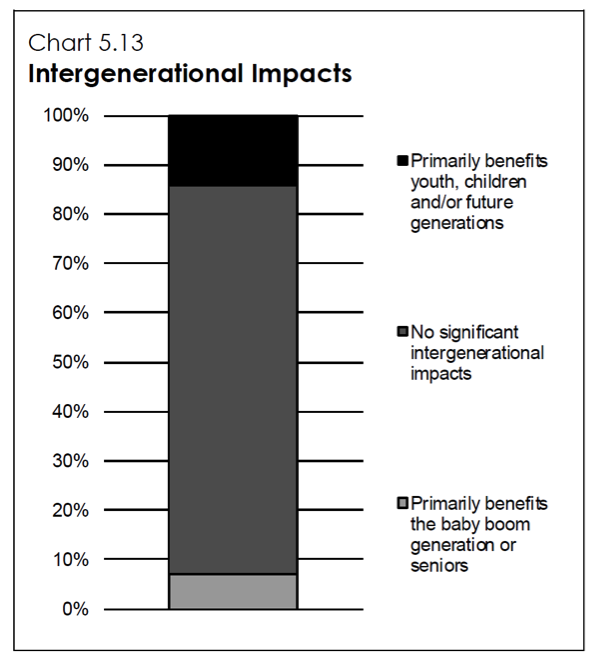 That chart aims to summarize the degree to which the budget prioritizes younger generations compared to older generations, or the population overall. It does so by counting up the number of new measures targeted to younger and older age groups.

Most readers would be forgiven if they drew the inaccurate conclusion that the 2019 budget invested more new money in younger than older Canadians.

This interpretation of the 2019 federal budget is inaccurate, because the chart in question gives disproportional weight to a bunch of small investments for younger Canadians, while obfuscating the size of a single budget line item — the multi-billion increase to Old Age Security.

Only one quarter of budget 2019 targets Canadians under 45

In short, these investments earmarked for younger Canadians pale by comparison with the billions forecasted for the aging population.

This pattern is consistent with four decades of Canadian public finance, which has seen Canadian governments grow social spending for our aging population — whom we love ❤️👨‍👩‍👧‍👦 and who we'll one day become — at four times the pace of investment for younger generations.

This year, for example, sees Ottawa allocate approximately one-quarter of budget increases to Canadians under age 45, even though we represent more than half of the population.

This imbalance in new investments occurs even though the budget confirms we are more likely to struggle with income insecurity; and that we “are being squeezed harder than any other generation when it comes to housing.”

Despite this major shortcoming, Liberal government officials indicate that we should interpret the innovations in intergenerational reporting in Budget 2019 as a first, important step. Just as the gender analysis has evolved over recent budgets, we should also expect the age analysis to improve in successive years.  We appreciate that government officials are already proactively inviting Gen Squeeze to contribute to these improvements going forward.

Why it's hard to look at the forest

One of the reasons governments are hesitant — and so far, unwilling — to show 'the forest' of generational spending comparisons outlined above ☝️is that some people find it divisive.

The numbers themselves risk leaving an impression of 'pitting generations against each other.'

We unpack this concern in our blog "Why we make generational comparisons."

A helpful analogy is the gender pay gap, whereby data reveal Canadian women continue to earn ~$0.70 on the dollar for full-time work as compared to men. The point of that comparison isn't to pit women against men, it's to help reveal how far we are from achieving gender pay equity in our country.

However, one of the challenges with extending that analogy to generational equity is that while the vast majority of Canadians no longer believe it's natural or appropriate for women to earn less than men, many Canadians believe it is natural and appropriate to spend more on our elders.

And in some areas — notably health care — this is, of course, true. We have demonstrated that if you compare total per capita investment levels in different age groups, the biological frailties that accompany aging will result in our governments investing more in Canadians as we age.  And so it should be.

The issue is with the trends in new investments. It's only through routine reporting of total investment levels in different age groups (the forest) that our parliamentarians will be able to tell whether differences in spending are a result of purely 'natural' differences in need, or whether governments are going beyond what is natural and actually prioritizing one group over, and even at the expense of, another — whether consciously or not.

That's why we'll be asking all federal parties to commit to improving on this year's federal analysis.

How we need to improve on this year's analysis

An improved analysis should include:

If we continue to see our more-than-half of the population receive only one-quarter of the new investment, the summary should transparently justify this budget distribution. For example, if government can find $17 billion more for Old Age Security; but can’t find $5 billion more for child care, or $5 billion more for parental leave, etc., we deserve to know why.

These are among the key questions about intergenerational fairness in public finance that we will continue to push our politicians to answer in upcoming budgets.