A new Generation Squeeze study of BC provincial party platforms finds that promises of a “strong economy, secure tomorrow” and “one practical step at a time” do little to address today’s realities for younger generations squeezed between lower incomes and higher costs for housing, and hoping to start a family in the future.  On their own, these findings are bad news for those concerned that BC is the least affordable province for young people to live in Canada.  More deeply concerning is the fact that there are other options - the same party platforms, for example, propose tax increases to spend more on retirees.  The real message to Generation Squeeze – Gens X, Y and their children - is that they are not a political priority.

Heading into this election, the rate of federal and provincial government spending on medical care, old age security and other retirement subsidies totaled about $45,000 per retiree annually.  By contrast, we spend just $12,000 per person under age 45, which includes K-12 education, post-secondary, medical care, tax breaks for families, employment insurance, etc.

Adding to this imbalance, both the BC Liberals and the BC NDP propose similar annual spending increases on medical care in their election platforms ($1.43B and $1.54B respectively, between 2012/13 and 2015/16, per table below) - spending which disproportionately benefits retirees.  But when it comes to education and social service spending that prioritizes Generation Squeeze, the BC Liberals propose only $230 million more while the BC NDP will spend an additional $533 million.  (Neither the BC Conservatives nor the Green Party of BC have family policy proposals with cost estimates).

The increase in medical care raises overall spending by around $1,000 per retiree in both party platforms, to $46,000.  Meanwhile, the increase in education and social services only adds between $100 (BC Liberals) and $201 (BC NDP) in spending per person under 45, and little of that applies to the tightest part of the squeeze – when families have children.

“The high level of spending per retiree is not the problem,” observes Dr. Paul Kershaw, UBC Professor and Founder of the Generation Squeeze campaign, who led the new study.  “Sustaining the medical care system is important as our population ages, because we all care about the health of our aging family and friends.  The key question is: why do BC’s two main political parties keep pushing us to pit the health of grandparents against the well-being of their kids and grandchildren?” 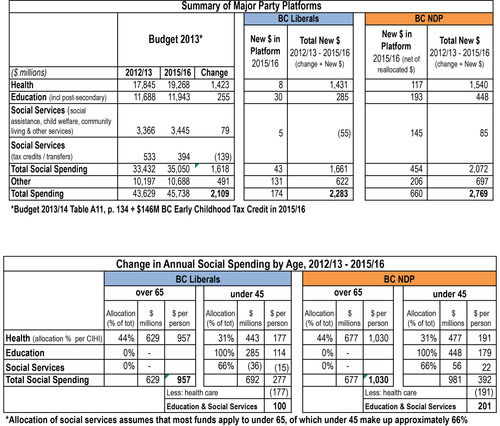