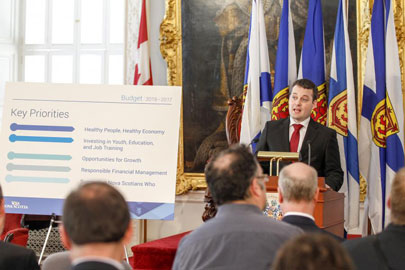 The McNeil government can feel good about balancing the budget in an economy that grew 2.5 per cent.  Plus, the population grew as urged by the One Nova Scotia Commission, with kind-hearted citizens welcoming immigrants and refugees.

However, the premier shouldn’t feel good about balancing the budget on the backs of younger residents.

Once again, Nova Scotia has the unenviable status of investing less in citizens in their 20s, 30s, 40s and their children than any other province in the country.

The government tolerates this dubious distinction while spending $2,000 more per retiree than in New Brunswick.  Why is the province stingy to young people while relatively generous to retirees?

Here are the facts.  Nova Scotia spends $6,200 per person under 45, or less than half the $13,200 it spends per retiree.  When federal expenditures for retirement and families with children are added to the mix, the total age gap in government spending adds up to more than $33,000 per person age 65-plus compared to less than $12,000 per person under age 45.

The bulk of Nova Scotia spending goes to health care ($4.1 billion), grade school and early child development ($1.3 billion), postsecondary and other training ($0.7 billion), along with social services for persons with disabilities, seniors and families ($0.9 billion). Total spending in these areas is up $38-million from 2015 after inflation.  Alas, spending on young people is flat.

The province remains anxious it is projected to lose 59,000 people over the next 25 years as the population ages and fertility remains low.  Given this anxiety, the McNeil government doesn’t do itself favours by investing so little in younger residents.

The typical 25-34-year-old in Nova Scotia earns around $4,000 less for full-time work than did the same age person in 1976-1980 after inflation.  They earn less even though they are twice as likely to have postsecondary to compete for jobs and face higher housing prices.  Young people adapt by devoting more time to paid work, especially women who have increased their labour force participation more in Nova Scotia than any province except Newfoundland.

Despite these adaptations, governments let childcare costs rise above university, while parents lose the equivalent of another mortgage payment when they share parental leave with a new baby.

If the province were serious about population growth, it would adapt policy to reduce dramatically these costs facing young families. Don’t be fooled into thinking the $6.6 million investment announced for childcare in this budget is a game changer.  It’s a fraction of what is needed to build a quality childcare system with fees down around $10/day.  Nor can the government claim it didn’t have additional money to pay for important caregiving services this year when it found considerably more for medical care – the majority of which benefits the aging population.

By being stingy with younger residents, Premier McNeil misses a major opportunity to grow the provincial population by attracting migration from other provinces. Although young people are squeezed for time and money out east more than a generation ago, the problem is much worse in other parts of Canada.  It takes seven years of full-time work to save a 20 per cent down payment on an average home in Nova Scotia – two years more than in 1976.  But it takes over 15 years in Metro Toronto and all of BC. This has well-educated professionals with job experience looking for more affordable pastures, including in provinces where employment prospects may be no better because they can stretch their income further even with less work.

Imagine if next year’s provincial budget moved Nova Scotia out of the doghouse for investments in younger residents.  Imagine the government committed to phase in increases for child care on par with medical care increases over the last three years.  Imagine the Premier encouraged the federal government to make real its promise to improve parental leave.

Then think about the ads that Premier McNeil could take out to entice talented young adults to build their careers and families out east.  Homes that cost a fraction of the price and more often provide yards where kids can play.  Plus child care services and parental leave that don’t add up to second and third mortgages.

That’s a strategy to grow the provincial population, and an economy that works for all generations.