We did it! Victory on housing affordability!
While more work remains, today was a great day for younger generations. GenSqueeze makes sense of the new Ontario Fair Housing Plan.
By Ryan Vandecasteyen 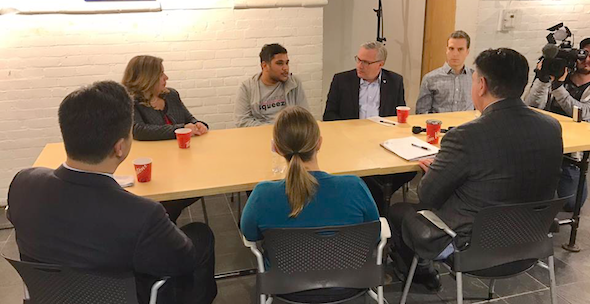 On Friday Gen Squeeze participated in a roundtable discussion about the Fair Housing Plan announcement with Ontario Minister of Finance Charles Sousa. Photo by Peter Maragos.

Generation Squeeze congratulates the Government of Ontario for its new Fair Housing Plan. It shows that the government is addressing the #CodeRed concerns of younger generations who know that the economy fails us so long as skyrocketing home prices leave our earnings behind. Guided by our “Homes First, Investments Second” principle, we called for new policy measures to level the playing field between renters and owners, tax housing wealth fairly, and encourage density to increase supply, especially purpose-built rental. (For more info, see http://bit.ly/GS_ON2ndworstecon). Premier Wynne's team has boldly started down this path.

1. We called for the Ontario government to level the playing field between renters and owners, including by closing the 1991 rent loophole. The Wynne government has closed it. Limitless rent increases are now illegal, and renters have predictability that their rents generally won’t increase more than around 2.5 per cent a year.

In addition, the Wynne government is adapting the Residential Tenancies Act to include a standard lease, and will limit the opportunities for landlord-initiated evictions. We’ll monitor what this means as the details become public.

2. We called for the Ontario government to encourage foreign and local investors to invest in purpose-built rental or innovative models of shared equity, rather than single-detached homes and condos. The Wynne government responded.

3. We called on the Ontario government to encourage the supply of new homes. The Wynne government partially responded.

Despite these important policy changes announced today, the evidence shows that high home prices will remain for young renters and aspiring owners by comparison with the past. So further policy changes are required to support younger generations to cope with the #CodeRed affordability challenges that continue throughout Ontario.

In sum, while more work remains, today was a great day for younger generations. With partners throughout Ontario, the many people contributing to GenSqueeze’s #CodeRed campaign achieved important policy victories that start to recalibrate the provincial economy to work once again for all generations.

We showed that politics responds to those who organize and show up. Thanks to the many thousands who have organized with us to win these policy changes that help to ease the housing squeeze. Onwards.

More information about the Ontario government’s new housing policy can be found here. 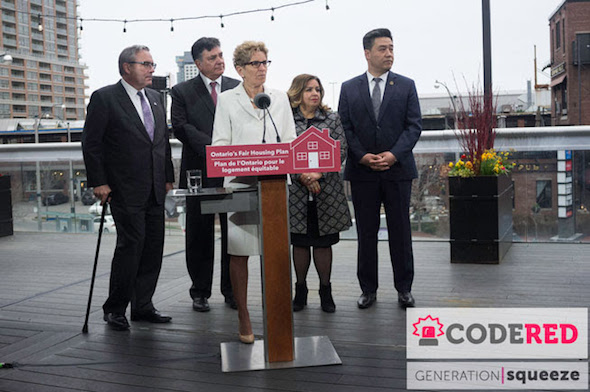 Code Red GTA campaigner Fatin Chowdhury was on hand to take this picture at the announcement this morning with Premier Wynne and members of her government.