Ontario most likely to work for all generations
By Ryan Vandecasteyen 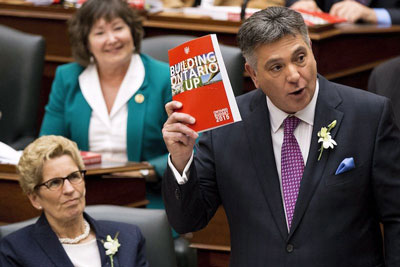 Ontario's government has articulated bold visions for transit, pension reform and pricing pollution. After analyzing all provincial and federal budgets tabled so far in 2015, Premier Wynne's commitment to make Canada work for all generations is matched by few, if any, other leaders provincially or federally.

This assessment may surprise some, since Ontario adds another $8.5 billion deficit for younger and future generations to pay.

The province also spends $12,500 per person age 65+ compared to $6,300 per person under age 45 when allocations for health care, education, and social services are broken down by age.  Like all provinces, Ontario must break free from the pattern of protecting health spending for the aging population by not investing adequately in younger generations. That’s why Canadians in their 40s and younger need a lobby to match the important lobbying of the Canadian Association of Retired Persons.

Still, the 2015 Ontario budget shows promise for intergenerational equity.  The transportation funding it features is important for younger Canadians who need more of us to move around by transit rather than by car to help preserve clean air to breathe now and for decades, and to reduce the risks of climate change.  It’s important for younger citizens who often commute much further, because housing near many places of employment and study is no longer affordable.

It’s also worth noting that Premier Wynne didn’t require a controversial plebiscite to make transit a priority, in contrast to her BC counterpart.

The Ontario Retirement Pension Plan is another signal that Wynne wants to tackle big problems for younger generations.  Mandating employer participation will help turn the tide that has seen many employers abandon this part of remuneration.

But there remains a problem with ORPP logic. The 2015 budget implies that younger people don’t save as much for retirement as did previous generations because we are more mobile in our jobs, or less disciplined to put money aside.

These assumptions miss the major point.  A new study on “Population Aging, Generational Equity & the Middle Class” shows that younger Canadians start with larger student debts, earn thousands less for full-time work, and pay housing prices that are up hundreds of thousands compared to 1976.  That’s why we save less for retirement.

The ORPP will only avoid this problem if it is implemented with additional public investments that save young Canadians money – some of which can be taxed back via new ORPP premiums.

Policies that reduce postsecondary debt are a solid option to young people’s capacity to save for retirement.

Even better would be substantial expansion of family policy.  Reducing child care fees from university tuition levels to around $10/day in combination with better leave for new dads and moms, including the self-employed, would save young adults tens of thousands of dollars.  With these savings, young people could pay down the average student debt, reduce by years the time to save for a home, afford work-life balance, and plan for retirement.

Our research shows that such policies would cost an extra $1,000 per person under the age 45.  This would leave Ontario spending on retirees nearly double spending on young people.

There are a range of sources from which to find the required funds.  One includes slowing the growth in medical care spending, as did Ontario’s 2015 budget.  The last decade of medical care spending increases has improved doctor remuneration, while the jury remains out regarding improvements to care.

Another option is the Premier’s plan to price pollution.  This is critical for generational equity, because environmental debts that accompany climate change will be paid primarily by younger Canadians.

It’s also necessary because the federal government is hollowing out the income tax base for all levels of government by increasing the contribution limit to Tax Free Saving Accounts. Since Canadians 60+ are three to five times more likely to max out TFSA contributions compared to those age 18 to 49, the federal government is cutting taxes primarily for seniors just when they want to use more medical care and old age security.  Pricing pollution would bring some intergenerational balance back to government revenue collection.

Dr. Paul Kershaw is a professor in the UBC School of Population Health, and Founder of Generation Squeeze (gensqueeze.ca).