Ontario is the second worst economy in Canada for younger generations
Generation Squeeze has prepared this study to showcase the performance of the Ontario economy relative to other provinces and over time. The results are clear and concerning: they show that Ontario is now the worst performing economy in Canada for younger generations east of the Rockies.
By Ryan Vandecasteyen

The next provincial election in Ontario is a year away.  Since many citizens will cast their ballot for the party they believe will best steward the provincial economy, Generation Squeeze has prepared this study to showcase the performance of the Ontario economy relative to other provinces and over time.

The results are clear and concerning.  They show that Ontario is now the worst performing economy in Canada for younger generations east of the Rockies.

At first glance, this finding may surprise some, because Ontario economic growth rates and employment trends are reasonably strong by comparison with most provinces.

In this study, however, we show that growth rates and blunt employment indicators provide incomplete, and sometimes distracting, signals about the success of an economy, especially when rising real estate prices are a key driver of these trends.

“Real estate now represents nearly 14 per cent of the Ontario economy, but a much smaller fraction of the province’s employment,” explains Dr. Paul Kershaw, University of B.C. professor, and author of the study.  “That kind of growth risks accelerating home prices well out of reach of people’s earnings – a risk that has become a reality in Ontario.”

Given this problem, the study digs into Statistics Canada and other data to examine the actual incomes that Ontarians earn, our costs of living, personal debt levels, etc.  These data clearly reveal that the standard of living has deteriorated more dramatically for younger people in Ontario in recent years than anywhere else in the country with the exception of B.C.  For example, the study finds:

Home-ownership is much harder:  Ontario is losing control of home prices.  It took five years of full-time work to save a 20 per cent down-payment on an average-priced Ontario home in 1976-80.  By 2003, it took eight years when the Ontario Liberals formed government.  Now, it takes 15 years on average.

Hard work pays off less for young citizens in Ontario now by comparison with the past, and less than in anywhere else in Canada east of British Columbia.  We now have to work years more to save a down payment; a month-and-a-half more each year to pay the mortgage on an average-priced home; and rents require more work from us as well.

Hard work pays off less throughout diverse regions of Ontario, including Windsor, London, Kitchener, Hamilton, Ottawa and especially the Greater Toronto Area (GTA).  Since 2003, the data show that typical younger Ontarians have lost seven years of hard work when measured by the labour required to save for a down payment on an average-priced home.  This is crushing dreams of home ownership, and growing competition for rental homes. In response, Gen Squeeze launched a petition to close the loophole that permits limitless rent increases for some homes built after 1991: www.gensqueeze.ca/1991loophole.

Debt is up:  When measured as a share of our economy, the Ontario provincial government debt is among the highest in the country, well above the average of all provinces combined.  It now equals approximately $22,500 per person in Ontario, which is up from around $14,000 in 2003.  Ontario has the third highest per capita provincial debt level in the country – and that debt is left primarily to younger generations to pay.

The provincial government’s approach to managing its fiscal balance-sheet and the economy has imposed alarming amounts of personal debt on younger Ontarians.  In addition to high home costs, young people’s personal debt is growing because postsecondary tuition increased more in Ontario than in any other province since 2003, and childcare now costs 50 per cent more than university tuition.

Environmental debt remains too high:  No province has reduced its carbon footprint more than Ontario since 1990; and most of those reductions have been achieved since 2003 under the current government.  Still, the carbon footprint in Ontario remains around 10 times higher than what the Intergovernmental Panel on Climate Change advises is the upper limit for sustainability in the coming decades.

Early childhood vulnerability:  When we squeeze generations of adults in their prime child-earing years, we also squeeze their kids.  35,000 children enter the formal school system in Ontario each year vulnerable in ways that mean they are more likely to fail, go to jail and wind up sick as adults.  Evidence suggests more than 20,000 of these cases could be avoided if governments were to adapt policy in ways that ease the time, money, service and environmental squeeze on the generations raising young children. 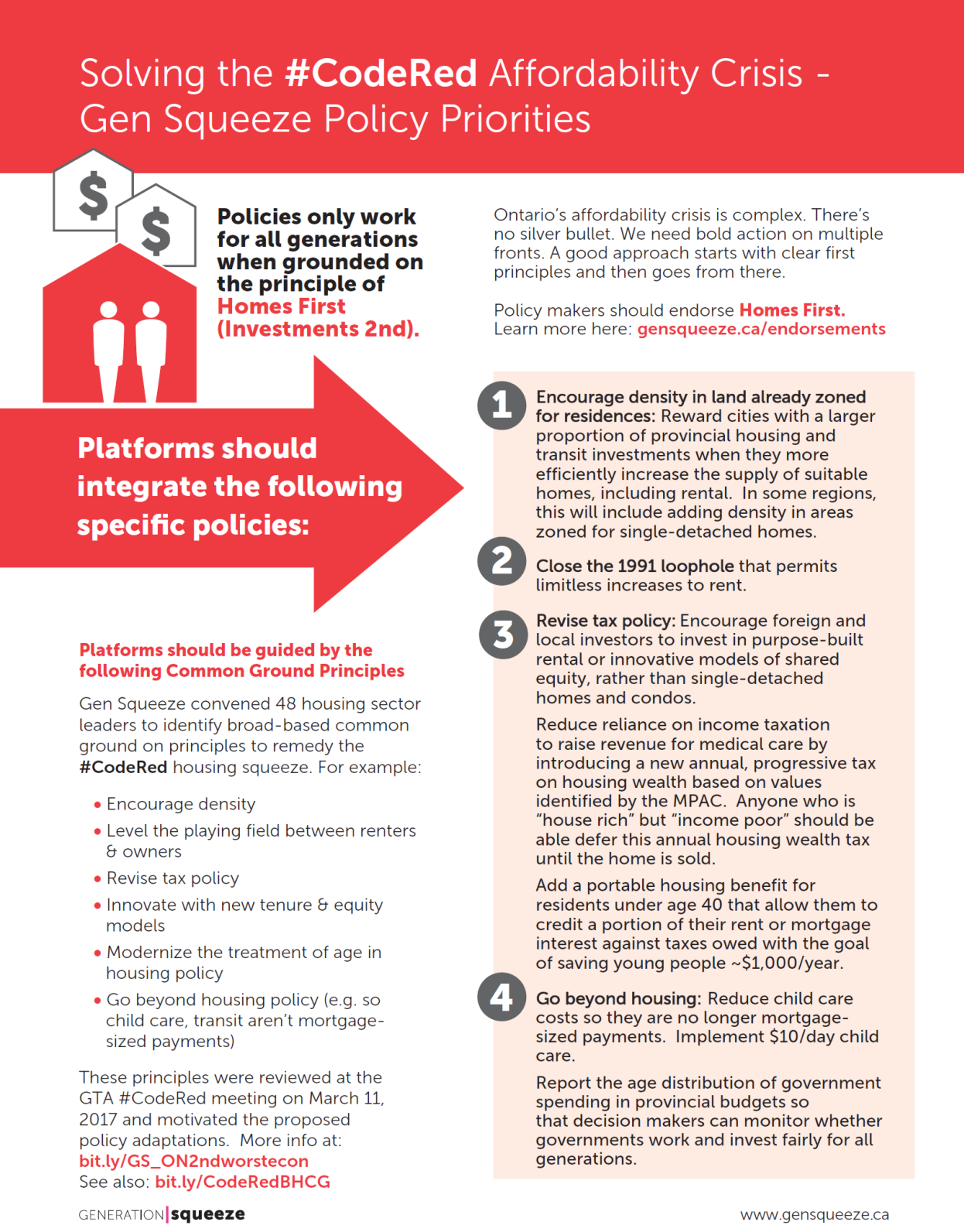 “When decision-makers point with pride to Ontario’s relatively high rates of economic growth by comparison with other provinces,” explains Fatin Chowdhury, a Gen Squeeze #CodeRed organizer in the GTA, “we encourage all Ontarians to consider that gross domestic product and blunt employment indicators are insufficient metrics to evaluate the performance of the provincial economy.”

“It is time we asked instead:  What kind of growth are we achieving?  Growth that compromises the standard of living for Ontarians in our 20s, 30s and 40s, along with our children, is clearly not an adequate measure of the success of our economy,” Chowdhury concludes.

At bottom, we should judge an economy over time in terms of whether it requires more, or less, work from citizens to cover our major costs of living, and whether it is sustainable.  In these regards, the growth that Ontario has reported of late has failed its younger citizens.

What citizens do with this information when deciding how to cast their ballot in the next election is a personal choice.  Generation Squeeze does not recommend or endorse any political party.  We simply present data to help citizens become better-informed when making political decisions.  We also provide 10 evidence-based principles for policy adaptation to support all political parties to include policy commitments in their 2018 platforms that will recalibrate Ontario’s economy to work for all generations.  See the one page appendix below for further information about policy recommendations.