Pricing pollution and affordability go hand in hand
Paying for pollution might feel like one more hand in our pocket, but we know we can’t solve our wallet problems by neglecting our climate problems.

The pricing pollution debate heats up as the Saskatchewan and Ontario Courts of Appeal hear arguments about the constitutionality of federal plans to price carbon in provinces that don’t establish their own.

As the founder of Generation Squeeze — a voice for younger Canadians in politics and the market, backed by cutting-edge research — I get it. Our organization represents thousands of people just like this. Many of us feel pinched in the pocket.

By comparison with when our beloved aging parents and grandparents started their careers and families, research shows that younger Canadians earn less (after inflation), despite going to school more, start more often with student debt, pay way more for housing, and accept longer commutes because we are priced out of many places where we grew up. 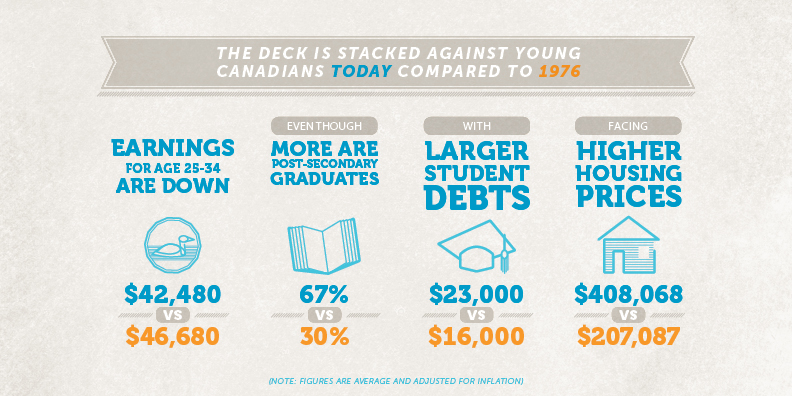 So the prospect of paying for our pollution as part of the fight against climate change can feel like one more hand in our pocket, reaching for a wallet that is already anemic.

At Generation Squeeze, we are devoted to releasing the vice-grip of money pressures on hockey moms and commuters. We do so by campaigning to adapt policy to make parental time at home more affordable, reduce the costs of child care to no more than $10 a day, rein in home prices, and build more homes, including rental units, closer to where we work and study. We are proud to lead these campaigns.

But we know we can’t solve our wallet problems by neglecting climate problems, because that is like playing Russian Roulette with our future.

Yesterday students worldwide were striking in an effort to protect their future, because to them, standing up to climate change means standing up for their lives https://t.co/XHPg54a5kL #PollutionCantBeFree #cdnpoli #StudentStrike4Climate #ClimateChangeStrike pic.twitter.com/blXZ9lWZnj

For those who are skeptical about what scientists predict climate change will bring, talk of environmental risks may seem like a revolver empty of most bullets. Spin the cylinder, pull the trigger, and…

Doing too little to prevent the acceleration of climate change is just as risky.

Climate change threatens to swamp our coastal cities, when young people do not have gills to swim.

Climate change threatens to burn our forests, when our skin can’t fend off fire, and our lungs can’t breathe smoke.

Climate change threatens the fertility of our soil, risking more hunger and malnutrition.

Climate change brings bugs for which our immune systems are not prepared.

These climate threats are frightening, and the risks to mental health are real.

When Canadian governments do not use all available tools to fend off the worst that climate change has in store, many judge that we discriminate against younger Canadians and future generations. Why? Because not pricing pollution puts at risk our reasonable aspiration to thrive in 2030 and beyond.

The World Health Organization has identified climate change as the greatest risk to human health in the 21st century, which makes pricing pollution an important health intervention. The logic is simple: people pollute more when pollution isn’t priced — as demonstrated by Nobel prize-winning research.

For this reason, Generation Squeeze is leading an Intergenerational Climate Coalition into the Courts of Appeal in Saskatchewan and Ontario to support carbon pricing.

“We will argue that the health threats to children and future generations are vastly disproportionate to their contribution to greenhouse gas emissions, and their ability to shape political decisions that determine emissions in the coming years.”

— Wanda Martin,
Past President of the Saskatchewan Public Health Association —

We think pricing pollution should be pursued as part of a broader #TaxShift. The idea is to tax less what we do want (like better earnings for typical people), while taxing more what we don’t want (like pollution and crazy home prices), in order to pay for better investments in young and old alike.

We pursue this multifaceted approach, because hockey moms in our network encourage us to ease the environmental and financial squeeze simultaneously.

So we continue efforts to:

The more we succeed in these affordability campaigns, the better we position ourselves to deal financially with costs that come from fending off the worst that climate change will otherwise throw our way.

This multifaceted approach can address our wallets and our climate together, ensuring we all have a chance to live up to our potential, enough time and money to enjoy life, and leave our provinces, country and planet better off than we found it.

Dr. Paul Kershaw is a professor in the UBC School of Population Health, and Founder of Generation Squeeze – a voice for younger Canada in politics and the market, backed by cutting-edge research.

We're calling on our politicians to put a high price on carbon, to use the revenue to make other aspects of life healthier and more affordable, and to help Canadians make good money as we transition to a green economy.

You can help make our voices even louder. Please sign your name in support of this critical health intervention: