Sean Cooper's Sacrifice
Sean Cooper took extreme measures to deal with the housing squeeze. Working up to 100 hours/wk, at 3 jobs, living in his basement, he paid off his mortgage in 3 years. You can too?
By Ryan Vandecasteyen 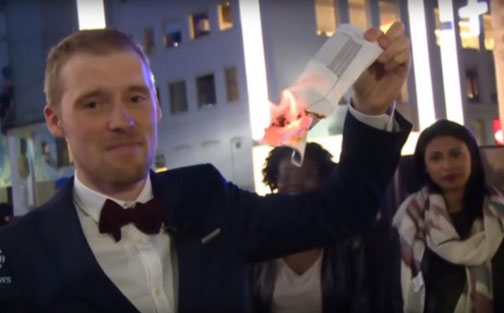 Sean Cooper took extreme measures to deal with the housing squeeze. By working up to 100 hours/week at three jobs and by living in his basement, he managed to pay off his Toronto mortgage in three years. You can too?

When Sean's odyssey was over, he invited friends and the media to a mortgage burning party.

The story hit a nerve, generating a flood of comments ranging from admiration to derision. The CBC reported on the reaction here: http://www.cbc.ca/news/business/sean-cooper-mortgage-debt-1.3402026

Stories of individual sacrifice and pluck can be inspiring. I'm certainly inspired by the tremendous discipline and determination demonstrated by Sean. I think those character traits are something we can all seek to emulate.

When I first watched the CBC piece, however, I remember feeling a sense of his specific approach being "not applicable to me." Even though my wife and I are in a similar situation to Sean, in our case shouldering a $350,000 mortgage, I didn't see adopting his approach of a 100 hour/week workload and pauper's life as a reasonable option for us.

Some people watched that CBC story and likely felt they were being lectured to: "you just need to work harder, spend less, get creative." For people who already feel they're doing everything they reasonably can, you can understand where the anger comes from.

That anger is common across the many aspects of the squeeze, and is warranted.

An emphasis on individual responsibility misses the often-overriding role of government policy. For some reason, Canadian status quo is to regularly increase spending on seniors and retirees (nothing inherently wrong with that), but to draw the purse strings closed when it comes to programs that primarily benefit younger Canadians.

One of our foundational reports, "Measuring the Age Gap in Canadian Social Spending" reveals this pattern strikingly. Overall, Canadian governments combine to spend >$33,000 per person over 65, and less than $12,000 for each Canadian under 45.

It's biological reality that we're going to need to spend more on Canadians as they age, but the evidence is clear that we are routinely under-investing in Canada's young people.

While we think all Canadians can take inspiration from Sean's example, Gen Squeeze was founded on the premise that many of us are already doing what we reasonably can to ease the squeeze, and it's time our governments did more, too.

A big thanks to Sean Cooper for reaching out to us with his story, and for his support of Generation Squeeze's work. Welcome to the network Sean!