Younger Canadians: wealth, debt and a declining standard of living
Reports have emerged about a “secret government” study alleging young adults today are richer than ever. So we should all stop worrying, right? Wrong. Here's the bigger picture
By Ryan Vandecasteyen 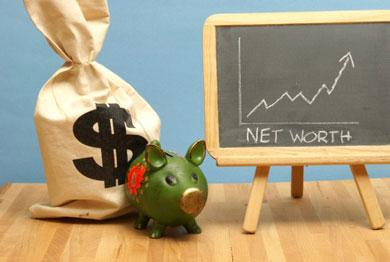 Wrong.  The story is more complicated.

Wealth comparisons across time are hard in Canada.  For example, we don’t have data to compare student loans now versus the 1970s or 80s.  That’s a problem, because tuition back then was half what it is today (after inflation). And fewer young adults back in the day incurred any student debt, because only half as many went to postsecondary.

We also can’t compare employer contributions to retirement savings.  This is a problem, because employers more often paid into generous pension plans in the past than they do today.  Now, young adults go to school years longer to earn thousands less (after inflation) for full-time work in jobs that less often pay defined benefit pensions.

Housing is something we can compare accurately over time, and I’ve done so at the University of BC in a study published last year.  The results show a paradoxical outcome for younger Canadians: those who scrape their way into home ownership are both wealthier and more indebted than previous generations. 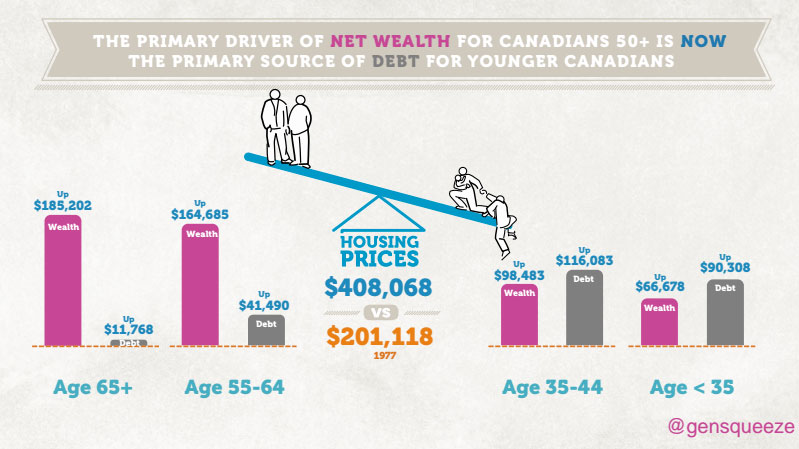 Average housing prices across Canada were around $200,000 in 1976 (adjusting for inflation). It used to take 5 years for a typical 25-34 year old to save a 20 per cent down payment.  Now the average home costs over $400,000, and it takes 12 years to save the down payment.  That’s a big deterioration in the standard of living for contemporary young people – especially when all this extra money more often pays for condos with balconies instead of houses with yards.

Home ownership is down for young adults compared to 1977.  Still, many of the 37 per cent under age 35 who push their way into the housing market wind up wealthier than in the past because they have a stake in an asset that has increased in value at rapid rates.  That’s why Canadian home owners under 35 report an extra $66,000 in net wealth in their homes compared to the same age group in 1977.

But what you haven’t heard from the secret government report is that to gain this wealth, young adults had to tolerate an extra $90,000 in mortgage debt.  In other words, for every $1 of net housing wealth they accrued, young adults accepted $1.35 in additional mortgage.  That’s a lot of extra risk, and a lot of extra work to pay off the debt.

By taking on more debt, young people have helped to make wealthier the 70+ per cent of older Canadians who are home owners.  The typical older home owner now reports net wealth in housing that is up $185,000 compared to the same age person in 1977, while taking on an extra $12,000 in mortgage debt.  So for every $1 of net housing wealth gained by a typical senior, she or he incurred just $0.06 (six cents) in debt.

Second, for the minority of younger Canadians who can afford to take on this debt, the housing market is also a major source of inequality with their peers who can’t make the down payment, or can’t tolerate much larger debt levels. The reality is all home owners in the last decade – young and old alike – have generally accrued wealth much faster than those who do not own property.

Last but not least, we should interpret media coverage of “secret government reports” with caution before jumping on a bandwagon that likes to critique younger Canadians for being lazy and entitled.  The evidence clearly shows that the majority of young people now go to school longer to compete in an economy that pays less for full-time work while charging much, much more for the primary cost of living – a home.

That’s not a good deal for younger Canadians, especially the majority who aren’t yet in the housing market.

Dr. Paul Kershaw is a policy professor in the UBC School of Population & Public Health, and Founder of Generation Squeeze (gensqueeze.ca).  His study of the historical housing wealth data can be found at:  http://bit.ly/GSMiddleClass