Opinion: Slower GDP is better when driven by stalling home prices
It's time to rethink the role of real estate in strategies for economic growth

All parties in an election aim to convince Canadians that they will be the best managers of our economy. As a result, this week’s news about a decline in Gross Domestic Product (GDP) since April is bound to be politicized.

Statistics Canada tells us that the slowdown in GDP is driven substantially by a reduction in home sales, which inclines some commentators to describe the housing market as “weak.”

Even a pandemic-induced recession has been insufficient to slow down average home prices. The most recent Canadian Real Estate Association data show that average prices grew by approximately 25% over the past year, even as sales slowed in July.

If we want an economy that restores housing affordability for all, we need home prices to stall, so that earnings can catch up.

Now, more than ever, we need political parties to acknowledge that GDP is a blunt measure of how “healthy” or “strong” our economy is.

Real estate, rental and leasing represents the largest contributor to Canada’s GDP at 14%. This industrial sector is bigger than manufacturing; bigger than mining, oil and gas; bigger than construction; bigger than health care; bigger than financial services; bigger than professional, scientific and technical services; and so on (See the Figure). Real estate has also grown as a share of GDP in all provinces over the last two decades, and often has been the fastest growing part of provincial economies. 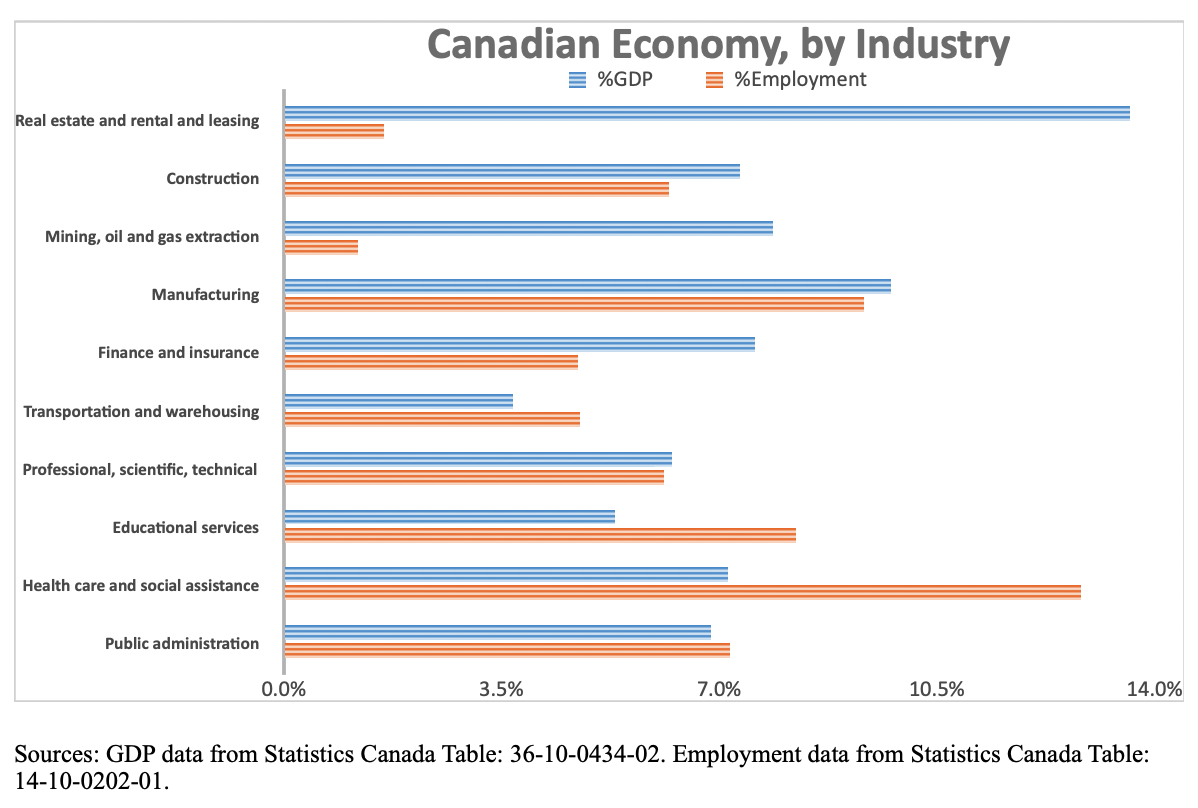 This highlights a problem. It signals that Canadians have been growing our economy by increasing the major cost of living, without generating jobs in that industrial sector in numbers that ensure local earnings keep pace, especially in urban centres. The 2% who find employment in the industry generally attract high incomes. Existing property owners, myself included, gain housing wealth, which will propel our spending and consumption to drive up GDP. It’s one way to grow an economy. But it is not a good way if our country prioritizes hard work paying off for younger people and newcomers to Canada – paying off in terms of generating earnings that can cover their primary cost of living – housing.

When Baby Boomers came of age as young adults around 1976, it took the typical young person five years of full-time work to save a 20% down payment on an average home in Canada. Now, it takes 14 years. In Ontario, it’s 18 years; 20 in BC; 24 in the Greater Toronto Area; and 28 in Metro Vancouver. These data show that when we grow our economy by growing home prices faster than earnings, we impose much more work on those trying to get a start in the housing market as aspiring owners. For those who can’t, the consolation prize is lousy – rising rent.

During this election, the best economic managers should be honest that we need to rethink the role of real estate in our strategies for economic growth. Instead of an economic stimulus strategy that relies on driving up the primary cost of living, it is time to imagine an economy that is stimulated by a housing system which reconnects the cost of living to local earnings in order to support affordability that attracts employment and fosters growth in other industries.

Reasonable concerns that stalling home prices may in turn stall GDP must be balanced against this alternative vision of how to stimulate the economy. The Liberal government’s recent commitment to “measure[e] what matters” in its new Quality of Life Framework signals new opportunity to achieve this balancing act. GDP growth shouldn’t matter nearly as much if what drives it also drives unaffordability. Happily, the new Quality of Life framework explicitly identifies housing affordability as a key consideration when evaluating whether the economic strategy is promoting a high quality of life.

This is good news. Because the true measure of economic prosperity is whether the economy requires less work to cover our major costs of living, and whether it is sustainable over time economically, socially and environmentally. Presently, our economy is not serving these goals well, and our reliance on housing to grow GDP is a primary culprit.