Squeeze Story: Anita Minh
Just as a dwindling salmon population signals the declining health of B.C.’s marine and terrestrial ecosystems, the housing challenges in Vancouver signal an imminent threat to the wellbeing of our province's young people
By Ryan Vandecasteyen 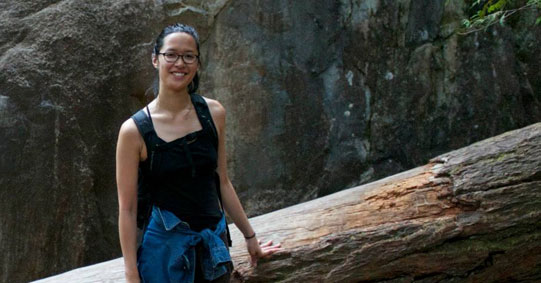 Growing up in Toronto, salmon were the pink-fleshed fish that I preferred above all others. When I moved to Vancouver, I came to appreciate them as the cornerstones of the culture and ecology of the Pacific Northwest. The threats they face from changing environmental conditions bring to mind another struggle that is taking shape in Vancouver— housing unaffordability.

The media tell two different stories about wellbeing in Vancouver. The Economist frequently rates Vancouver among the top 10 in the world for livability, but it carries the moniker “No Fun City.” In 2012, the Vancouver Foundation published a survey highlighting that Vancouverites feel isolated and disconnected. [1]

It’s hard to say exactly why this city is so polarizing but my personal experience would speak to both the sublime and the stressful. Vancouver is beautiful. The lure of the Pacific Ocean and the mountains on the North Shore are just as strong as they were when I first moved here four years ago. I feel at home in Vancouver’s diverse landscape. Here, cultural differences have the potential to be celebrated as well as to stimulate conversations about equality. As the first generation in my family to have postsecondary training, I feel proud to start my doctoral degree at the University of British Columbia this fall, joining almost 10,000 other graduate students at one of Canada’s most renowned educational institutions.

But finding my way in Vancouver is starting to feel more like swimming against the current. I have been employed full-time in public health research at UBC with good pay and benefits, but in a city where the average rent for an apartment in October 2015 was $1,144 [2], the search for affordable housing eludes me. I pay too much for a 500-square foot studio apartment in the West End. I would like to find a place to lay down some roots and have a family, but with the financial savings that I will compromise as a student renting in Vancouver, that dream is no longer within reach. I am anxious about what this financial stress means for my mother as she ages into retirement. I’m not sure when I will have children. My decisions about where to live, when to have a family, and how to plan for the future are starting to feel less like choices, and more like reactions to a challenging social climate.

The current is strong. The study that I co-authored for Generation Squeeze looks at the cost of home-ownership to illustrate how the ability for today’s young adults to plan their futures no longer follows the path taken by their parents. Housing prices have tripled in Metro Vancouver since 1976 meaning that even after adjusting for inflation, what it costs to buy a 2-bedroom apartment in Vancouver today, would have bought 2 houses for Canada’s aging population when they were young adults. Housing is typically considered unaffordable when people 30% or more of total household income on shelter expenses including, mortgage payments, rent, property taxes and utilities [3], but in Vancouver, a single-detached home costs the average household 109 percent of their income on a 25 year mortgage [4].

It is tempting to say that this problem is relegated to Vancouver but, housing prices have doubled across the country since 1976 (after adjusting for inflation). Meanwhile, full-time earnings for the average Canadian between the ages 25-34 have fallen by more than $4000 compared to 1976.[5] These trends are effectively pushing young Canadians, not only out of Vancouver, but towards social vulnerability as they begin having children and as their parents enter the later portions of their lives.

While I don’t believe that governments can easily change the supply and demand that influences housing prices, I do believe that housing unaffordability is a signal to governments that other parts of life become more challenging: child-care costs, stable employment, and student debts. I joined Generation Squeeze because I and other young adults are happy to work hard for our futures, but I believe young people can build the political clout to ask our governments to adapt policies to support this time in our lives.

It’s hard to imagine what will happen to this region without salmon. They are a fundamental part of the ecosystem in the Pacific Northwest; their migration to their spawning grounds supports all coastal species from mayflies, to red cedars, to grizzly bears. Housing affordability, in a similar way, has been crucial to the wellbeing of families in Vancouver and across Canada. Because young Canadians experience housing strain now, they will see impacts on their financial stability, family planning, and overall wellbeing. Unaffordability puts the greatest strain on those who have the fewest material and social resources – the result of which will be a more unequal Canada.

It is important to adapt our policies to meet the vulnerabilities facing young adults. Just as the response to a dwindling salmon population requires a holistic understanding of its critical importance to the future of BC’s ecosystems, a response to housing unaffordability requires a holistic understanding of its role in preserving the wellbeing of Canadians now and in the future.

[1] 31% say it is difficult to make new friends here. And 25% say they are alone more often than they would like to be. People have little interest in getting to know their neighbours or say they prefer to keep to themselves (32%). The survey can be found here: https://www.vancouverfoundation.ca/sites/default/files/documents/VanFdn-SurveyResults-Report.pdf

[4] RBC estimates that the full cost of owning a single detached home, including the cost of a 25-year mortgage, utilities and taxes, will take 109 per cent of the average household income in Canada. (http://www.cbc.ca/news/business/housing-affordability-rbc-1.3469098)