Squeezing Back by Sharing Wheels Part III
Aaron Cowie's in the midst of a transportation makeover: squeezing back by ditching his car and using a combination of public transit, a bike from Shareshed and the Modo car share fleet to get around
By Ryan Vandecasteyen 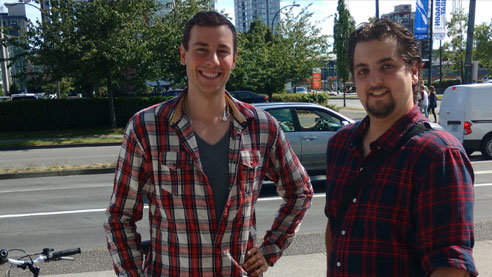 Aaron Cowie's in the midst of a transportation makeover: squeezing back by ditching his car and using a combination of public transit, a bike from Shareshed and the Modo car share fleet to get around. Here's Part III of our Q&A with Aaron, to see how it's all going.

Photo: Aaron with Daniel from ShareShed (and an out-of-frame ShareShed bike!)

So you used the Modo car for a grocery run, tell us about your experience?


I had a very good experience last week using all transit types available to me. On one instance I transited to my work location, then picked up my bike and used the Modo to take the bike home in the rain. I then used the Modo to pick up groceries and do some errands at night and returned to work the next day in the Modo and took the train home. The Modo actually proved to get me out of a jam. Since I was not prepared to ride the bike home in the rain I was able to get my Modo loaded up and go. Since I was new to the app I called Modo for help getting started. I was put though very quickly and they had me up and running in no time. Their contact center is very friendly and super helpful which makes a difference in situations like I was having with my initial setup.

You added the bike to your repertoire this week. What have you been learning about biking in this region?


I learned there are a lot of quick ways to bike to where you are going in Vancouver. Daniel at Shareshed even outlined scenarios where he was actually quicker at arriving at locations on his bike than the people he was with that drove there. Once you factor in finding parking and traffic on Vancouver streets, you can see how this is possible. Although I was given a bike that is very flexible in its use, I am not a fan of what people refer to as a “Fixie”. To those, like me, who do not know what a fixie is, it is a bike that you need to continuously pedal to keep the bike going. This is especially evident if you are going downhill and need to pedal to keep the speed you are going. Luckily, my bike can be switched up to allow me to coast which for me is very important as I am not in the best shape… YET.


You must be settling into your transit routine, what was last week like?


I have settled in quite nicely to my routine now. I have used the bike to do some short commutes to my brothers place as well as to the store for the odd items. I have been using transit as my primary go to commute to work as the route is easy and allows for a relaxing ride to read the paper and listen to some music. My Modo is a good problem solver for me. should I need something quicker than transit or for transporting anything bigger than I can carry, it works great for me in that respect. All in all I have gotten into a good groove and see this as a longer term solution.


How have your friends and family been supporting your efforts to "green" your transportation ( saving money and the environment)?

I have found that by doing this I am able to be a conversation starter about greener commuting and alternative transit options. As I was I big drive to work type of person, the fact that I am consistent and comfortable with these options allows for greater impact on the options of my friends, family and coworkers. From time to time I have gotten the odd ride with friends and carpooled home but for the most part they can see the impact I have made on my commute and I can confidently say it is far greener.