Squeezing Back by Sharing Wheels Part IV
Don't forget Gen Squeeze can help ease your transportation squeeze. We have car shares deals in 5 locations across Canada, in case you're considering your own transpo makeover. www.gensqueeze.ca/benefits
By Ryan Vande 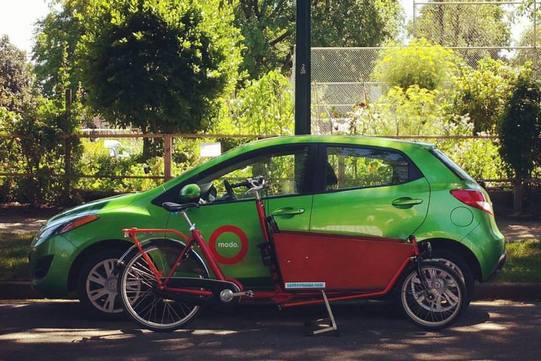 Aaron set out on a challenge in June – can he adjust his transportation habits to green his footprint and his wallet?  To help him out, some of Gen Squeeze’s favorite partners got involved: Modo, Translink and Share Shed.

Aaron had some great learnings from his adventure, so we checked in with him 3 weeks later to see how he felt about his experience, now that it’s had time to sink it.

What were some assumptions about alternative transportation that you have busted via this makeover?

The number one thing I was worried about was the difficulty in adjusting to the change. I worried that I would struggle with the commute length as well as learning to use different transit systems. While doing the challenge I found it quite easy to adjust to transit times and schedules since I am always striving to be early for any meeting I have. The longer commute time allowed me to catch up on reading or people watch on transit, which can be very entertaining! With carsharing vehicles close to work and my home, I knew I had a car when I needed one: Modo was easy to use, and, when I had questions, their support centre was very friendly and helpful. I didn’t expect biking to be so difficult to get back into but the saying “…like riding a bike” does not mean you can ride with the ease you once did in your younger years.

Wondering if you could tell us about the time or cost comparison – where is it beneficial, where is it not?

The best savings for me is on the small or short commutes to the store or shopping. When you require a large vehicle to pick-up a larger item or make that big Costco trip, one of Modo's cargo or mini vans is the best option. It is cheaper than renting a truck for the day and usually takes no time to complete the trip. The smaller trips to the store for milk or small items are very affordable on a bike. When you're missing that quick item for dinner it actually ends up being faster in urban environments to ride your bike, rather than driving your car, to the store. If I factor driving and insurance with maintenance into a comparison, transit can be cheaper than my car but when I include my wife into the costs it would cost more for the two of us once she is finished with school and no longer has a U-pass.

Do you have any travel plans this summer? How might you incorporate green transport into these?

I will be going to the Yukon in the summer and since it is an adventure place I will be mostly using bikes and canoes as well as transit to travel. I usually try to transit or shuttle when I travel since it is cheaper and greener. I also learned that my Modo membership has roaming privileges with other car shares, so I’ll be looking into that. There are also Modo cars at the ferry terminals!

So the million $ question is – Will you keep your car?

Right now I will keep my car but I am actively monitoring the costs to find the tipping point in cost savings. I am also alternating and reducing when I use my car, and to prevent it from becoming idle too often I am carpooling when possible. Another thing that this has changed is my decision to buy a new car. I was thinking about getting a used car for my wife but I am now looking at greener options such as electric vehicles or carsharing (1 in 6 Modo cars are an EV or Hybrid!). So essentially, I will be pre-emptively reducing 1 carbon producing vehicle from the road and possibly my current car later on down the road.

(Don’t forget you can join a car share through Gen Squeeze to get a bonus benefit!)