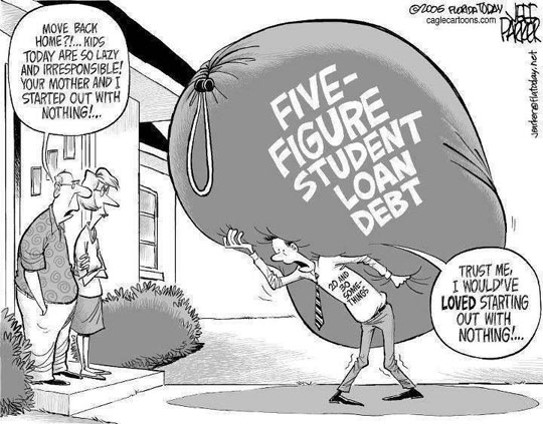 Shorty after finishing university I moved back in with my mom. One morning, while sitting at the kitchen table reading the newspaper, I stumbled across a cartoon: a 20- or 30-something year old is moving back in with his parents. His parents are standing in the doorway, arms crossed, commenting on how lazy young people are and how they started out with nothing.

Meanwhile, the poor college graduate, staggering under the weight of his massive student debt, is wishing that he had the opportunity to start out with nothing. That’s when I realized I wasn’t living in the same world my parents did when they graduated from university.

When my parents went to university, earning a degree was a big thing – it set you apart from the competition in search of a job. By the time I finished high school, a university degree had become the price of entry to the job market.

When my parents went to university, they were able to save enough over the summer to pay their tuition and living expenses for the upcoming school year. By the time I went to university, this was so far out of the question that I had a hard time believing my parents could possibly have done that. I would have had to save $15,000 over four months – after paying taxes and living expenses. What student job pays that? None. Which is why most of my friends and classmates graduated with large student debts, all for the privilege of landing a job that paid less after inflation than our parents landed often straight out of high school.

Clearly, the world has changed since our parents were starting out. But we haven’t changed much. We want the same things their parents and grandparents did when they were young: the opportunity to earn a living, make a home, have children, enough time with family, friends and the chance to pursue our interests. Is wanting the same things as our parents too much to ask?

Sometimes it seems like it. When I look around at my peers, we often seem like bionic hamsters – running maniacally on our wheels, getting nowhere. Despite being better educated than our parents’ generation, we face a tight job market. When we find a job, we typically earn less than our parents did, although we probably feel relieved just to have one. After working a few years and making some headway into paying off our student loans, we might be brash enough to start thinking about buying a home. Not an actual house (who can afford that?), but maybe a small apartment somewhere in the suburbs. So we scrimp and save, and just when we think we might have enough for a down payment, we see that housing prices have gone up. Again.

Maybe we give up on the dream of owning a home, and resign ourselves to a lifetime of renting. Or maybe we compromise even further, and buy something even smaller or farther away than we had hoped. How are we supposed to raise a family in a tiny apartment or make time to see our children if we spend three hours commuting each day?

Of course, that’s assuming that we can even afford to have children. For most of us, having children means choosing between giving up a salary so that one parent can stay at home to care for the kids, or paying the equivalent of a third mortgage for childcare.

It doesn’t have to be this way. Canada has a proud history of building policies to adapt to the challenges facing entire generations.  Back in 1976, a third of seniors lived in poverty.  So Canada invested in our publically funded health care system and guaranteed retirement income supplements. Today, seniors are the least likely age group to live in poverty.

Those policies didn’t just happen accidentally. Those policies came about because ordinary people got together and told the government that something needed to change.  It’s time for Canadians in our 20’s, 30’s and 40’s to come together and start asking for policy that meets our needs. The first step is to realize that it’s not our fault we start our adult lives at a time when the job market is tight, real estate is expensive and child care costs as much as a second mortgage. We’ve simply been dealt a bad hand.  It’s not a personal failure.  As younger Canadians, we’ve already done a lot to work with the hand we’ve been dealt by going to postsecondary more than in the past, working longer hours, living in two-earner households, and postponing or abandoning our plans to start a family. Since we’ve done a lot to adapt, it’s time politicians adapt too.

Imagine for a moment that we’re successful. Together, we’ve worked with governments to build a better generational deal.  Imagine that you’re no longer burdened with massive student loans and childcare expenses that cost as much as a second and third mortgage. Imagine how this could make buying a home, if not an actual house, is a possibility.

If we stand together, we can build this better deal, because governments respond to those who organize and show up. That’s why I joined Generation Squeeze.  It’s a national, science-based, non-partisan lobby that advocates for Canadians in their 20’s, 30’s and 40’s in the world of politics. With just one click, you can add your voice to the tens of thousands of others asking the government to adapt policy for us with the same urgency it adapts for others. “Just one click” might seem too easy.

And if only a few of us do,  it won’t work.  But imagine what we can achieve if all 15 million Canadians in their 20’s, 30’s and 40’s added their one click. With a few minutes of effort, you can help make that happen. Spread the word, and let your friends know about Gen Squeeze. Share your story to help other young Canadians realize that they are not alone.  That it’s not their fault they earn less while facing higher housing prices.  That we CAN do something about it. That, together, we can make Canada work for all generations.