Home prices remain up to 4 times higher than what young Canadians can afford: new study

Average home prices in Canada are more than double what is affordable* for younger Canadians, according to new research that illustrates the state of housing affordability in every province and major cities within them.

Released by Generation Squeeze, the study shows that Canadians between the ages of 25 and 34 continue to straddle a massive gap between housing prices that remain at near-historic levels in key parts of the country, and average earnings for this age group that have been relatively flat, if not down, for several decades. Data in this report show that:

“Despite recent nominal declines in housing prices compared to previous years, the gap between the cost of owning a home and the ability of younger Canadians to afford it is at critical levels. If housing markets are levelling out, they remain untenably high,” said Dr. Paul Kershaw, lead author of Straddling the Gap: A troubling portrait of home prices, earnings and affordability for younger Canadians, and founder of Generation Squeeze.

In advance of this fall’s federal election, experts are calling on all parties to commit to expanding Canada’s National Housing Strategy in their election platforms. The current strategy, which is largely a social housing plan, is designed to support about 530,000 of the most vulnerable Canadians. However, around 1.2 million more are believed to be in core housing need, many of whom earn decent incomes but remain priced out of the market.

“A second phase of the National Housing Strategy must be launched to ensure all Canadians can afford a good home — whether renting or owning — by addressing failures in the broader housing market,” said Kershaw.

Unsurprisingly, the study shows the housing affordability gap for younger Canadians is most severe in Vancouver and Toronto, where housing prices are four and three times more expensive than what a typical younger buyer can afford. However, the study also shows that problems extend to places like Victoria, Kelowna, Hamilton, Kitchener, Ottawa, Edmonton, Calgary, Montreal and Halifax.

For a breakdown of affordability findings by province and major city, please see the full report: Straddling the Gap: A troubling portrait of home prices, earnings and affordability for younger Canadians

Generation Squeeze has worked with academics and other experts from BC, Ontario and Quebec to publish a new four-part housing policy framework that all federal parties are being called on to adopt in advance of this fall’s election. Released by the Housing Research Collaborative, core recommendations include:

“In the lead-up to the fall federal election, we need all parties to commit to bold action that builds on some of the progress we’ve seen emerge in the past couple of years,” Kershaw said. “Now is not the time to slow down efforts to modernize Canada’s housing market by simply hoping the massive gap between home prices and local earnings will resolve itself.”

*Affordability means Canadians do not spend more than 30% of their pre-tax earnings on housing, according to the CMHC

Read the full study: Straddling the Gap: A troubling portrait of home prices, earnings and affordability for younger Canadians 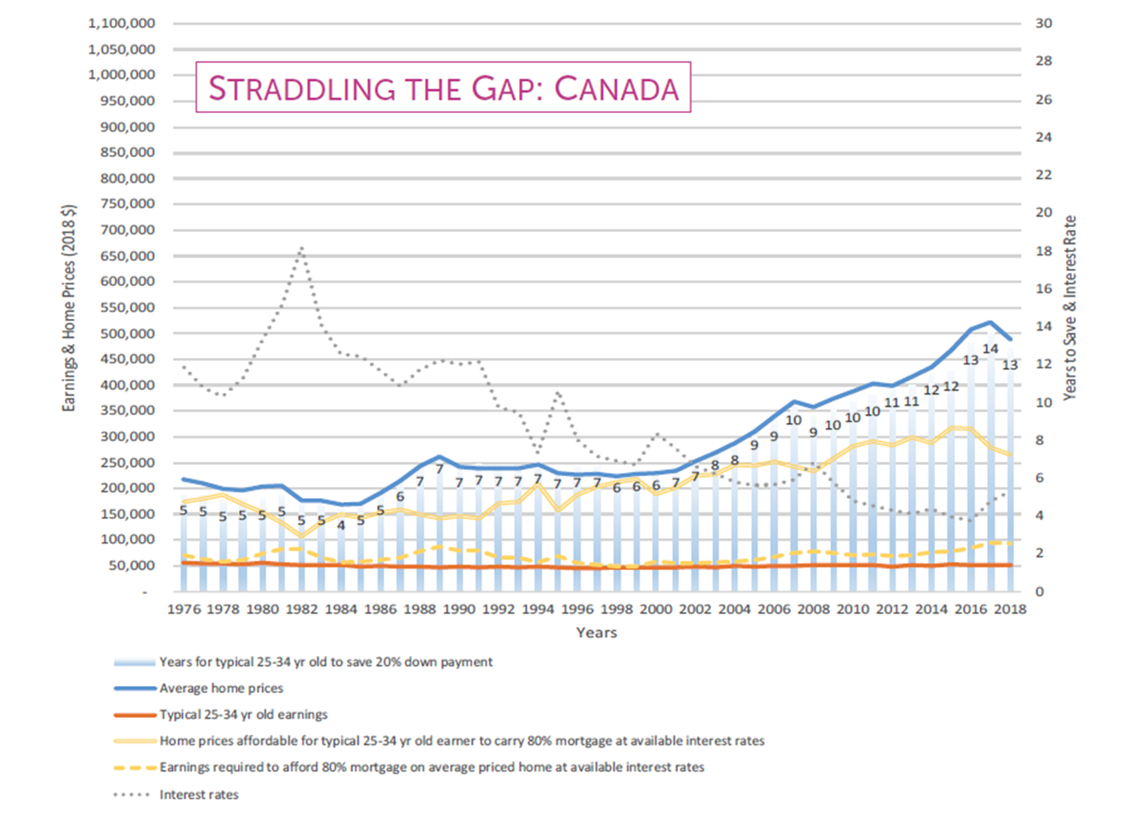 Sutton is the Co-Executive Director of Gen Squeeze. She works to build the Gen Squeeze base, tell stories about our issues and impact, and secure resources to keep up the hustle.
Homes First
Share this