Douglas Todd: The ethics of high prices - should Vancouver homeowners take the money?
By Ryan Vandecasteyen 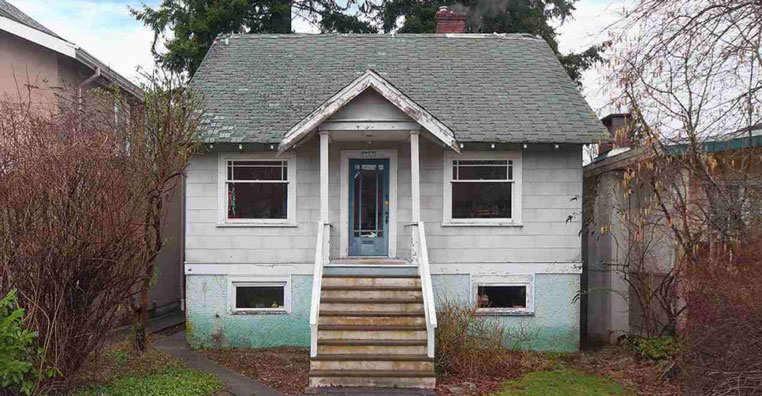 The sale of this teardown in Vancouver for $2.48 million in 2016 caused outrage on social media.

Many people like to accuse Metro Vancouver’s ensconced homeowners of being greedy sods. Is this helpful?

This article originally appeared in the Vancouver Sun on August 19, 2017.

The popular historian and poet George Bowering feels guilty about selling his Point Grey home in Vancouver at the market price.

He hates that real estate has ridiculously inflated in Metro Vancouver. He is appalled that there is no longer any real correlation between the city’s (tepid) median wages and its astronomical housing and rental costs.

“We feel terrible about the high housing prices. But we took advantage of them. So we’re hypocrites. We didn’t say: ‘We can’t take that offer. Cut it down by a million,’” said Bowering, 81, who moved to Metro Vancouver in the 1950s.

It’s not for nothing that Bowering and wife, Jean Baird, are feeling gun-shy about selling their home for several times the price they bought it. Many people like to accuse Metro Vancouver’s ensconced homeowners of being greedy sods.

Is this helpful? I’ve witnessed potential discussions about the root causes of housing inequality in Metro Vancouver stopped short when someone righteously blurts: “I sure don’t feel sorry for people selling their homes for millions of dollars!”

I have talked to two centre-left politicians, for instance, who seemed to mirror former B.C. Liberal cabinet ministers in having no sympathy for longtime Richmond, Vancouver city and West Vancouver homeowners who worry their neighbourhoods have become over-priced and hollowed out, filled with the empty and near-empty homes of rich property speculators, foreign and domestic.

Is the targeting of established homeowners a form of scapegoating, based on envy? Is it a form of schadenfreude, the German word describing the pleasure derived from another person’s misfortune? Or does criticism of the house-comfortable come from a sense of injustice?

Even if the answer is a combination of all three, over-emphasizing the alleged avarice of older homeowners is an unnecessary discussion stopper.

Why consider better policy options, why question which politicians you voted for, if you can just inject your energy into attacking the owners of homes whose values have gone up 10 to 20 times in the past few decades?

To be balanced, I have to acknowledge a small portion of homeowners — not to mention many of those who own multiple properties — do indeed seem too fixated on protecting their windfall profits.

Yet, even while some longtime owners are covetous, an Angus Reid Institute poll shows four in five of all B.C. adults believe soaring housing prices are “hurting” British Columbians.

Even if homeowners sold below market value, it wouldn’t help. It would fail to prod politicians to change their lackadaisical national, provincial and municipal housing policies.

Most B.C. residents want to see measures to reduce the housing gap, suggests the poll. Most are worried about children and grandchildren.

How can we move beyond this stalemate, in which the housing have-nots feel diminished by the haves, and nothing gets done to make things more equitable?

University of B.C. ethics professor emeritus Michael McDonald suggests we start by not being too hard on those making substantial profits, on paper and otherwise, on their houses and condominiums.

Although the anger of the have-nots is understandable, McDonald reminds us many house-rich Metro Vancouver residents have scrimped a long time to pay off their mortgages.

Some homeowners may also need to sell their dwellings to afford retirement, he said. And many may be downsizing to free up cash for their children to get into the market.

“It’s not easy to generalize,” McDonald said. “Not all the profits are going to something that is frivolous.”

McDonald, a former head of UBC’s Centre for Applied Ethics, believes it’s natural and acceptable to put your family members before strangers.

Even though McDonald worries about the “unsustainable” rise of the trans-national super-rich, he adds some well-off people show responsibility to the larger society through charitable giving, political involvement and supporting the redistribution of wealth.

It would not prove much, or anything, for individual homeowners to sell at a much lower than market price — as one municipal politician suggested to me they should (only partly facetiously).

Individuals selling houses below par could just play into the hands of speculators. It wouldn’t do anything for overall prices. And it certainly wouldn’t urge politicians to change their lackadaisical national and provincial housing policies.

The onus is on all of us to press public officials to return Metro Vancouver, and other internationally popular “Gateway cities” such as Toronto, San Francisco and London, to a point where local wages better correlate with housing prices.

Prominent Vancouver real-estate market researcher Richard Wozny recently put the havoc in statistics. He issued a blistering report exposing how “Richmond and Vancouver now have amongst the highest income-to-house ratio prices in the world.”

“It is important to note that a ratio of five (to one) is considered overpriced, and Metro Vancouver is over 20. Burnaby is 23, Richmond is 28 … and West Vancouver records an astronomical price-to-income ratio of 37.”

It is almost impossible to state how much damage to affordability has been done by municipal governments, federal Conservatives and Liberals, and especially the B.C. Liberals, who have encouraged globalized capital to flood our urban markets.

Like many Vancouver homeowners, George Bowering is appalled there is no longer any real correlation between the city's (tepid) median wages and its astronomical housing and rental costs. He’s looking for politicians to boldly respond. RIC ERNST / PNG FILES

In addition, federal and provincial governments have failed to enforce their own laws, which means many wealthy housing speculators have avoided or evaded taxes, a trend Wozny details. Some do so by claiming they are “not residents of Canada for income tax purposes.”

The new B.C. NDP government is in an unenviable and tough position, says McDonald. The incoming politicians have to try to engineer a much talked about “soft landing” in Metro’s housing market.

The public expects the NDP to ease disastrous home-price inflation, but at the same time not panic those who have ventured into the market in the past few years, typically with big mortgages and parental help.

Homeowners who have seen the values of their dwellings increase at a crazy speed may have to prepare to see those values drop, at least on paper, at least for a while. They may also need, McDonald suggests, to support fair redistributive tax measures.

Otherwise, those who have been squeezed out, especially the young, have little hope.