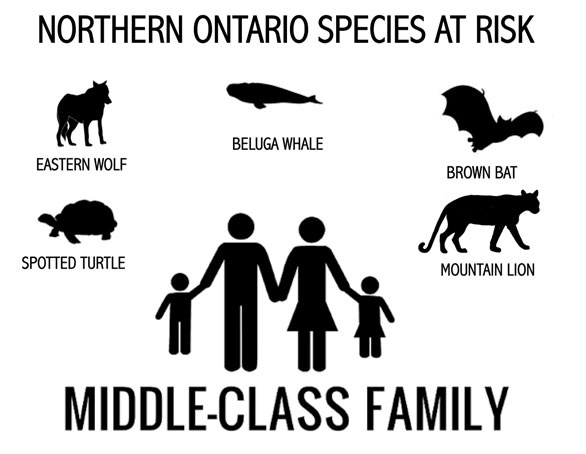 There is an old adage about parents wanting to give their kids more than they were given themselves. This could include opportunities for education, travel, employment, and the much sought after “white picket fence." I know this rings true for many, but for the “squeezed” generation in Northern Ontario, many would be satisfied to achieve the level of comfort their parents enjoyed. That standard of living includes the opportunity to live and work in the North, with viable opportunities for prosperity, and access to public services.

The region has typically been harder hit by periods of economic recession. The North has a greater than average reliance on primary industry, which can be quite volatile, and public sector employment. Unemployment has typically remained two percentage points higher than the provincial average. This has made it hard for young people to find stable well-paying jobs.

"There was never any question when I packed my bags for university that I wanted to return to the North one day."

Personally, there was never any question when I packed my bags for university that I wanted to return to the North one day. Those from the region can be fiercely loyal to the benefits of rural living. It never crossed my mind that after getting some experience in Ottawa, and graduating with highest honours and a degree in Public Policy, that I would not be able to find a entry level job in my hometown.

Maybe I was 17 and naive, but I was just doing what many young people are told: “Go to university and you’ll get a good job." So after I graduated with my undergrad, I relocated again to Toronto, the city of big lights and big dreams, for employment opportunities. I knew this would be a temporary move. After a year-long contract, I headed back to the North to attend the new Northern Law School at Lakehead University in hopes of gaining skills that could make me a positive contributor to the northern economy.

My boyfriend of three years also planned on spending life in Northern Ontario, but the tough economic climate for new teachers sent him packing for small town Alberta, where he teaches on a First Nations reserve. Over a third of new teacher’s college graduates are unemployed, so he’s lucky to have a job at all even if it’s two provinces away. Our relationship is now feeling the squeeze. Inter-provincial dating would take a financial and emotional toll on anyone. For now we have settled on focusing on our careers, and figuring out our relationship in due time. In the future, more difficult decisions will have to be made.

Wishing you could have it all seems greedy, but sometimes I just wish I could have a little piece of the pie. The population in Northern Ontario continues to decline, and is projected to increasingly do so in the future. The population is also aging at an increased rate from that of the rest of the province. Between 2001 and 2006 the portion of the population 65 and over grew by 5.4% in Ontario, and 10% in the North. It is not that young people don't want to stay in or return to the region, but they need viable economic opportunities to do so.

Intervention by government is one step towards stopping this brain drain to the south, be it by supporting progress in the Ring of Fire, or protecting public service jobs in Northern Ontario that were once relocated here to address some of these employment problems. Maybe investing in more professional schools located in the North like the Lakehead Law School would help attract and retain people in the North.

Some see young people as entitled or lazy, but young Northerners aren’t looking for a free lunch. We’re willing to make sacrifices in order to find a realistic way to contribute to our communities and start families of our own. Some people will also say, “stop whining and go where the jobs are”, but I don’t think it’s desirable or even possible for this urbanization trend to continue. Between us, my boyfriend and I will have four university degrees, two of which are professional, and it’s hard for me to accept that we can’t live and work in our hometown, where our parents worked and thrived for years.

Lauren T. is a volunteer contributor to the Gen Squeeze blog.