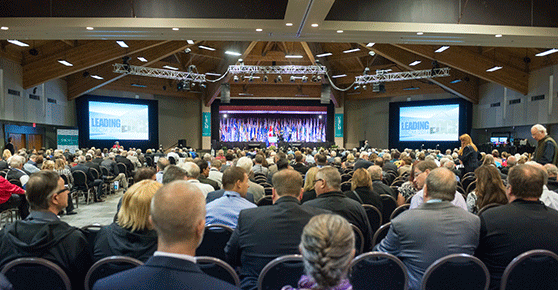 Delegates from B.C. local governments gather at an annual UBCM convention where, among other things, they take stands on important issues.

At this year's Union of B.C. Municipalities Convention, delegates from your local government have an opportunity to vote on three resolutions to help put Homes First. Which way will they go?

Each year, UBCM resolutions are often used to signal the collective stance of B.C.'s local governments on important issues that fall within provincial or federal jurisdiction.

The resolutions can help spur higher levels of government to act.

At this year's UBCM, three resolutions championed by the Cities of Victoria and Nelson are requesting more action, tools and resources to address the ongoing Code Red housing crisis.

Generation Squeeze supports all three. Here're the resolutions along with our analysis:

A2 - Encouraging the Use of Residential Property for Housing

"Whereas residents and communities across British Columbia face acute housing affordability and housing availability challenges, threatening the economic security of individuals as well as the productivity and viability of local economies, as youth, seniors, people with disabilities and working people lack access to affordable housing options;

And whereas effective fiscal and taxation tools have been identified to address these challenges by encouraging the use of residential property to provide housing, and discouraging speculation, “flipping,” commodity investment and other market distortions aimed at maximizing the exchange-value of residential property for the owner, while contributing toward a sharp escalation in the price of housing:

Therefore be it resolved that the Province of British Columbia and Government of Canada take action to introduce effective fiscal and taxation tools to encourage the use of residential property to provide housing, and discourage speculation, “flipping,” commodity investment and other market distortions that contribute toward a sharp escalation in the price of housing;

The thrust of this resolution to get the provincial and federal government to "introduce effective fiscal and taxation tools to encourage the use of residential property to provide housing, and discourage speculation, "flipping," commodity investment, and other market distortions" is bang on. We need to ensure that housing is for Homes First (investments 2nd).

The resolution's focus on the Capital Gains Tax Exemption and Property Transfer Tax is appropriate, and rather than prescribe exact adjustments (which would be easy to quibble over), it simply restates the goal of such adjustments, includes one option for consideration by the province, and requests that more of these funds be made available to local governments. What's not to like?

Note: A capital gains tax may also contribute more generally to taxing fairly the housing wealth that some have accumulated over recent years/decades.  But that would depend on the new tax having a retroactive component to it, which is highly unlikely. As a result, Gen Squeeze also supports an annual progressive surtax on housing wealth to address this theme, which can (but does not need to) be consistent with the Land Value tax proposal from Victoria below.

Tell your local Mayor & Councillors that you'd like to see A2 pass:

B14 - Restoration of Land Value Tax

"Whereas concern around housing affordability is widespread in British Columbia communities, and the Land Value Tax provides a fiscal mechanism to incentivize improvements to property for housing and other purposes, and creates a disincentive to holding vacant property for speculative purposes;

And whereas local governments in British Columbia previously had the authority to introduce Land Value Taxes—taxing land at a higher rate than improvements:

Therefore be it resolved that the Government of British Columbia restore the authority of local governments to introduce a Land Value Tax, to incentivize improvements to property for housing and other purposes, and create a disincentive to holding vacant property for speculative purposes."

Another title for this resolution might be "Restore the OPTION of a Land Value Tax," because it simply requests that the province give municipalities another tool to e.g. incentivize improvements to housing and disincentivize holding property vacant for speculative purposes.

There is now a very long historical tradition that has emphasized the value of taxing land as the primary source of revenue for governments. Often, land tax proposals come with a simultaneous call to reduce income taxes (shifting the tax burden away from work and towards speculative activity). However, B14 leaves that larger conversation for another day and focuses on simply adding another tool to the toolbox. Again, given the urgency of the housing crisis in many of our communities, what's not to like about that?

Victoria Councillor Geoff Young has this to say about the Land Value Tax: "When we tax improvements, we’re discouraging people from making improvements; from maintaining their property. When we tax the land, we’re not discouraging anything because they can’t take the land away."

“I’m certainly not suggesting that we are going to go back to the old ideal, a single tax where we only tax land or have it at very high levels. But it is perfectly practical — because B.C. Assessment Authority does assess land and buildings separately — to gradually increase the weight at which we’re taxing land and to decrease the weight that we give to the taxation of property,” Young said.

Note: Property wealth has two components: the land value and the building value. The evidence from the Gen Squeeze lab suggests there are reasons to tax both more, and especially land values (though this resolution makes NO comment about whether total taxes should be increased or decreased). Notice that this would disproportionately impact single-detached homes, etc. for which the land to building ratio is the greatest. This is consistent with Gen Squeeze policy recommendations, although taxing the market price already captures this theme, because the market already prices the extra land at a very high premium. So the added complexity for public discourse that comes from talking about a “Land Value Tax” rather than a property or housing wealth tax may be unnecessary.

Tell your local Mayor & Councillors that you'd like to see B14 pass:

Whereas the Government of British Columbia and Legislative Assembly responded to a housing affordability crisis by proceeding with legislation that empowered the City of Vancouver to introduce a surtax on vacant residential properties;

And whereas communities across British Columbia face housing affordability pressures while a portion of the housing supply in all communities remains vacant, including properties that have remained derelict for years and, these derelict vacant buildings pose substantial risks in terms of public safety as well as liveability and desirability for adjoining/nearby neighbourhoods and properties:

Therefore be it resolved that UBCM request the Province of British Columbia to extend the authority to introduce a surtax on vacant and derelict residential properties to local governments across British Columbia and encourage the occupancy, maintenance and improvement of buildings to address housing affordability and public safety.

Vacant & Derelict Homes Taxes (like the version being implemented in Vancouver) do triple-duty: (1) they help free up existing supply, (2) they help reduce harmful demand from speculators, and (3) so long as owners continue to leave units vacant, they generate revenue that can be used to provide OTHER housing options for residents.

Such a tax may be more or less appropriate in any given municipality, and each local government would be free to define what "vacant" meant, taking notes from Vancouver (and potentially Toronto's) experiment. Overall, it's hard to see a reason not to grant ALL municipalities the OPTION to use this tool, as well.

Tell your local Mayor & Councillors that you'd like to see B91 pass: