Gen Squeeze Walking Tour of Vancouver's New River District
At completion, The River District will bring up to 7,000 new units of housing online — the equivalent of Vancouver’s projected housing growth for one year. We just had to check it out and ask some questions.

When it comes to solving the housing crisis, Gen Squeeze has a three-part motto. We need a surge in the right kind of housing supply, we need to restrict harmful demand from speculators and others, and we need to start taxing real estate more fairly.

But on that first bit, what could a surge in the right kind of supply actually look like? Vancouver's massive new River District presents one potential answer. So we went on a tour to feel it out.

Wesgroup Properties is leading the charge to build up the River District, formerly known as the East Fraser Lands.

At completion, the River District is estimated to house 13,000-17,000 people, and will bring up to 7,000 new units of housing online — the equivalent of Vancouver’s projected housing growth for one year. In other words, a surge.

They're currently constructing a 269-unit rental building named Fraser Flats, and 20 per cent of the units in the community will be designated affordable housing.

We got a bunch of peeps together to explore the place, ask questions and learn how we can shape the future of this community.

Leading the tour was Kirsten, a planner from the city who's worked on the project since its inception in approximately 2001, and Brad from Wesgroup. 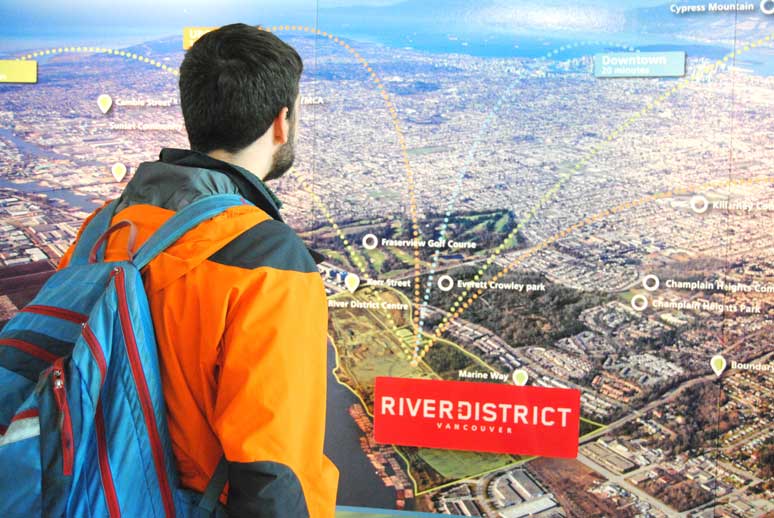 On Sept. 30 I joined a free walking tour and dinner of the River District, a south Vancouver neighbourhood of housing units, parks, stores, roads, and schools so new it’s construction is not yet fully complete.

A couple months before the tour, I’d vaguely heard of the River District through Facebook events for drive-in movies located there. I assumed that the area must be in North Van, thinking the “river” was the Burrard Inlet. I just didn’t realize the River District could be in Vancouver, since giant new developments seemed like a remote possibility, due to high land prices and a lack of unused space.

I was surprised by the scale of the River District project. We drove by what felt like two or three city blocks of this emerging district on the south side of Marine Way. The right side was lined with stark juxtaposition: classic single-family detached houses unchanged from the late 90s.

The tug of the future ushered me to think clearly of the questions I had while nostalgia pulled me into the murky memories of my early childhood. My family had lived in one of these basement suites when we first moved to Vancouver.

Back then, the River District’s land held only businesses, car dealerships and industrial sites that took up lots of space that people only seemed to drive to with a specific consumer purchase in mind. It wasn’t exactly a pedestrian-friendly space. 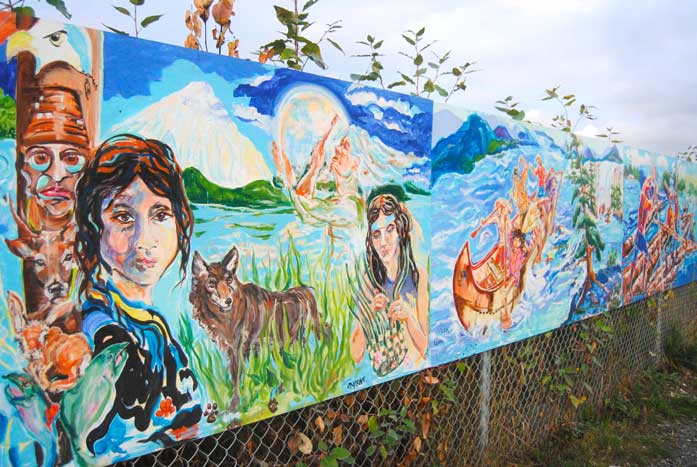 We parked and started the tour at the Community Centre, a small building with a high ceiling, community kitchen, wall-to-wall windows facing the river, the developers’ architectural model of the district and informative exhibits about the local natural habitat. There were signs outside promoting a farmers’ market and a knitting class. I learned that there was a very popular restaurant, Romer’s, attached to the other side of the centre. 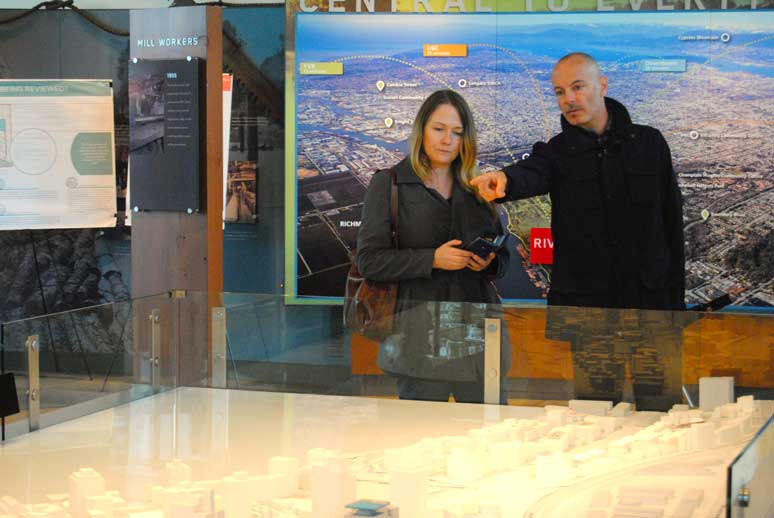 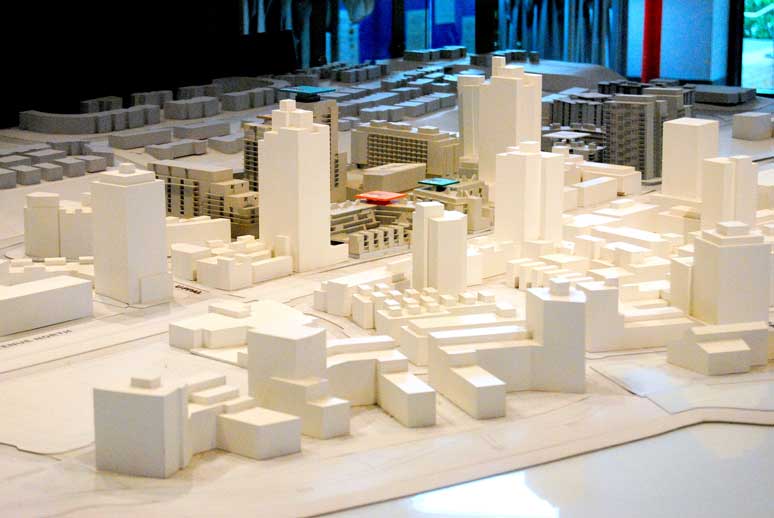 Leading the tour was Kirsten, a planner from the city who had been working on the project since its inception in approximately 2001, and Brad from Wesgroup, a developer that stood out to me in that they weren’t just building housing units – they were building community spaces and facilities for the people who would live there. 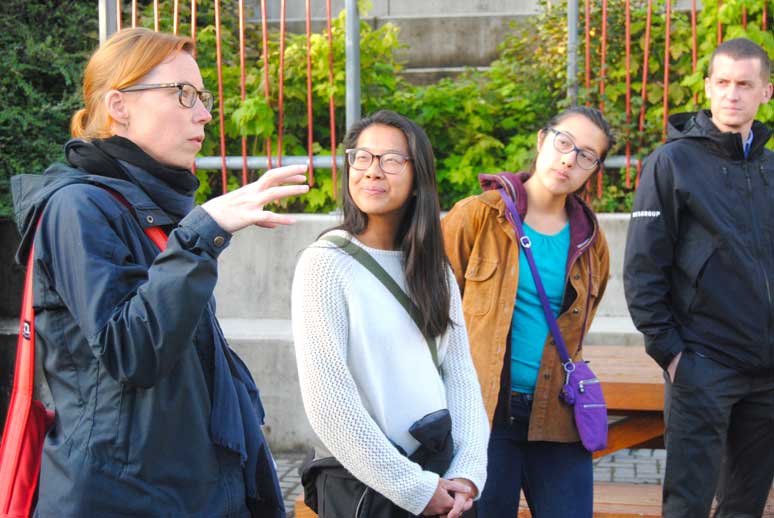 There will be a high school, elementary school, bank and credit union branches, and a grocery store. 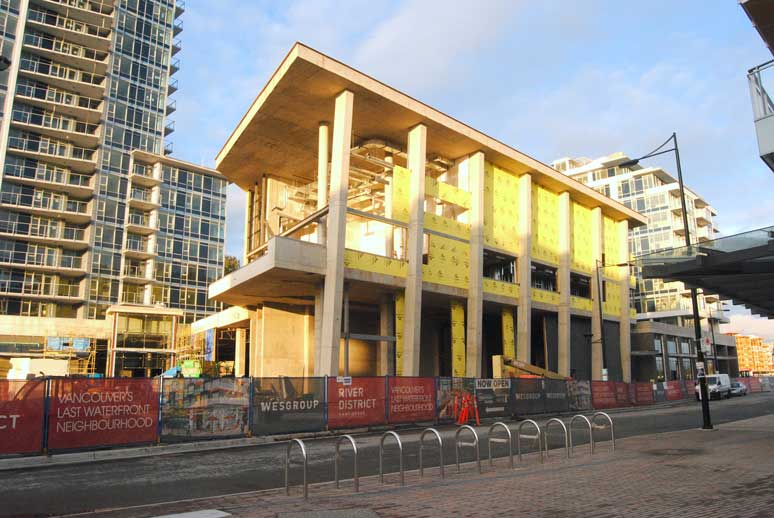 There were already yoga classes, child-minding and parent support programs at the community centre built just for the district. Not to mention the most impressive wine store any of us had ever seen. 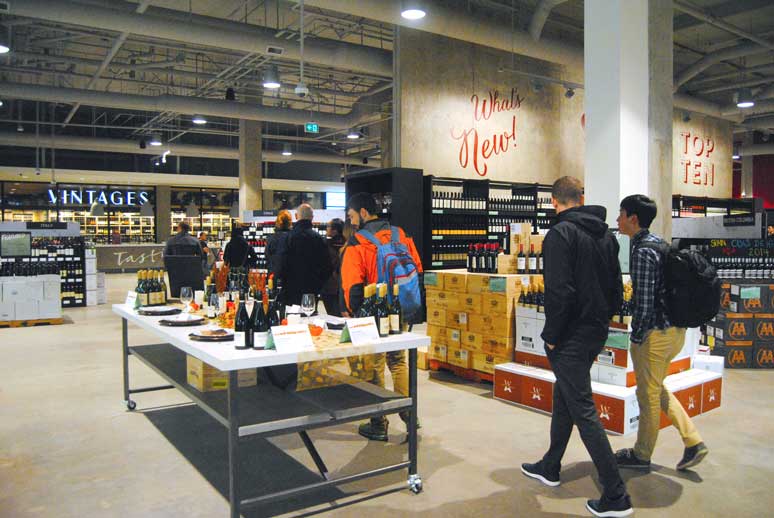 We walked to the two- and three-bedroom attached homes closest to the Community Centre. They were three-storey townhouses with garages at the bottom level. There was a multi-level cozy park between two townhouses sporting green grass, short bushes, and a playground for toddlers where a dad babysat a playing child. The middle level between short stairs was a small paved walkway overlooking the river that had a simple constructed yet grand wooden table for al fresco public dining. Dimply apples grew on the young trees. 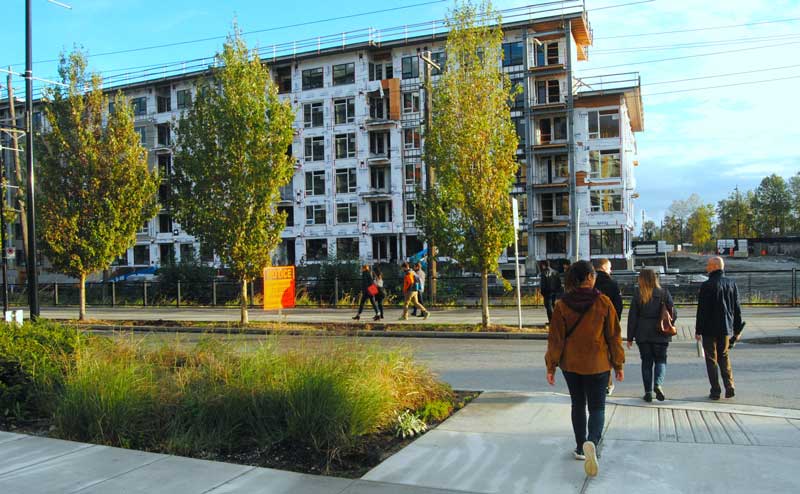 The tour stopped at the sidewalk on the edge of the development, fringed with an incline of soft wild grass through which birds swooped and hid. Trees at the top of the slope muffled the hum of traffic from Marine Way. There was a bike lane running through the River District that would soon be upgraded and rerouted, but was already buzzing with families and individuals zipping along. 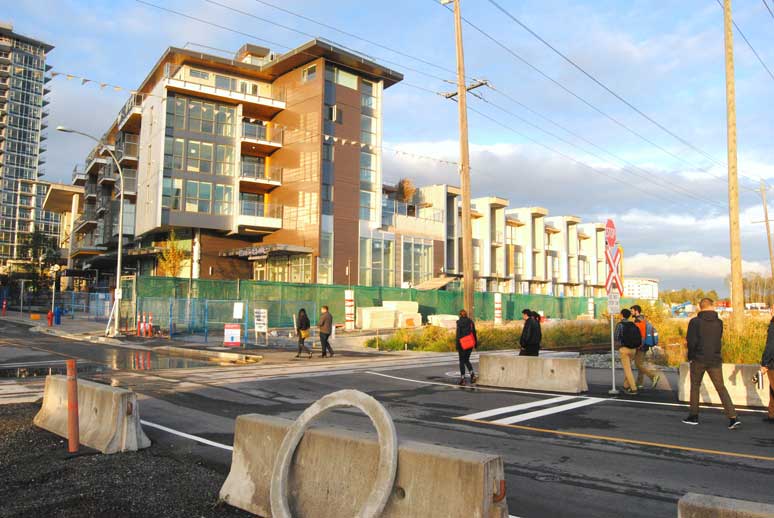 Wesgroup had created a sandy spot for a “beach” facing the Fraser River. The view showcased a unique visual to the forming identity of the district. The waterway lacked whitecaps but two opposing currents rippled the surface constantly, and it was narrow enough to clearly distinguish scrubby trees, pulleys and warehouse docks on Annacis Island — yet wide enough for tugboats, floating logs and slow-moving motorized boats to occasionally pass.

Compared to the character of other waterfront neighbourhoods, it was definitely not the oceanic expanse of the West End’s beaches, the trendy vibe of Kitsilano nor the kite-flying spacious flats of Richmond’s Steveston. I felt a hint of history that this had been and still was a working river, in both its natural power and industrial images. 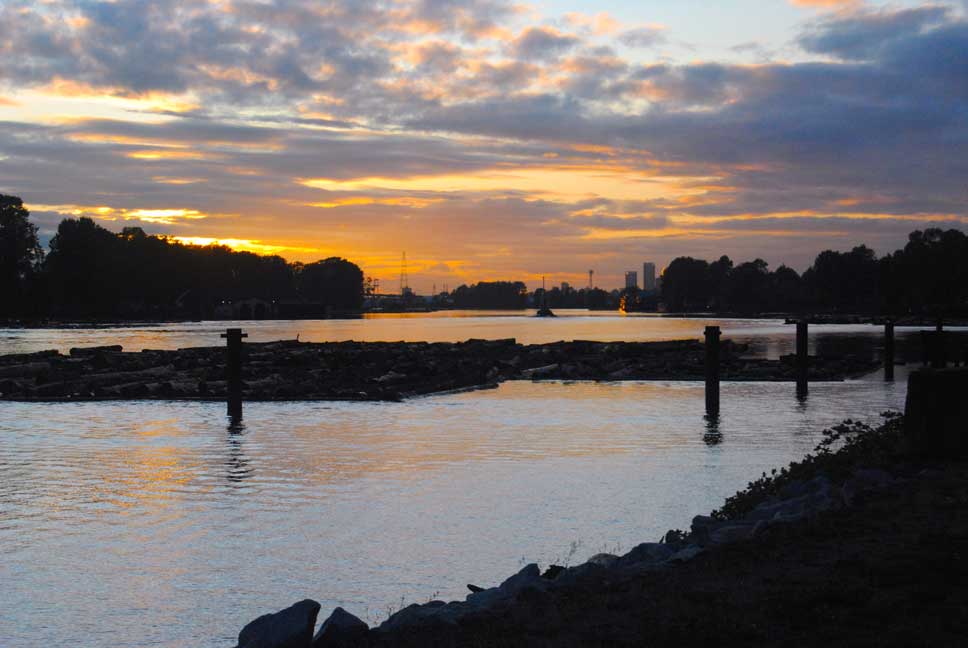 I’m excited to see how the finished community turns out. This weekend about 800 people lived in the completed 2- and 3-bedroom townhouses. At its completion, it will be estimated to house 13,000-17,000 people. Much of the units are reserved for families, two entire buildings are designated for rental apartments, and 30 per cent of the units for purchase were designated affordable housing.

After the tour, we settled into dinner at Romer’s. Seated with other people from the tour, we relaxed and enjoyed conversation about many things: urban planning, truffle oil uses, politics between developers and utility companies, kids growing up, and more aspirations for how this community would become a lively home and destination for Vancouverites.

It was an excellent opportunity to chat with city staff and local developers, and see the product of their work bringing solutions to housing affordability. We got to have conversations with folks who have a lot of decision-making power in development projects, and learn how we, as citizens, can engage with the City of Vancouver's planning process for Area 3, which will dictate to an extent what type of supply is built there. 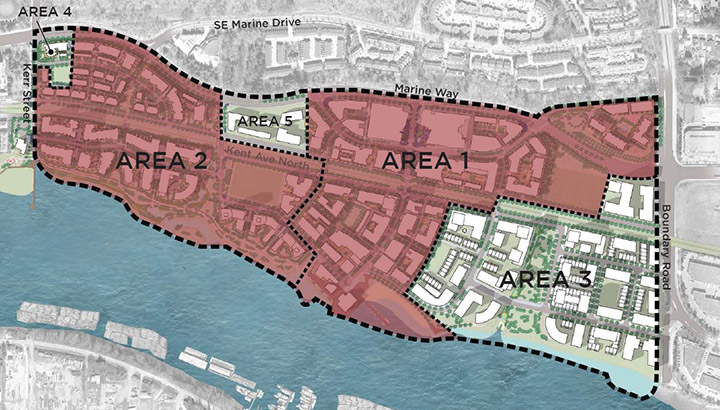 So where does that leave us?

The main question on our minds after the tour is, "how many of these new units will actually be affordable, or, within reach of local incomes?" Because a surge in housing supply isn't helpful unless it serves to rein in costs.

With most of the River District's proposed new units just a sketch on paper, the answer to that big question remains unclear. It will depend on whether our politicians take comprehensive action to restrict harmful demand, build enough new supply, and start taxing real estate wealth more fairly. We have our work cut out for us.

One of Gen Squeeze's priorities is helping ensure when new supply is being considered, the voices of people living in a neighbourhood and those who would like to live there are both included. Here's a rundown of how you can get involved.

Right now the city is tabulating feedback from the River District survey that closed on Sept. 6. There will be at least two more opportunities where the public can provide input, including surveys at each of those steps. 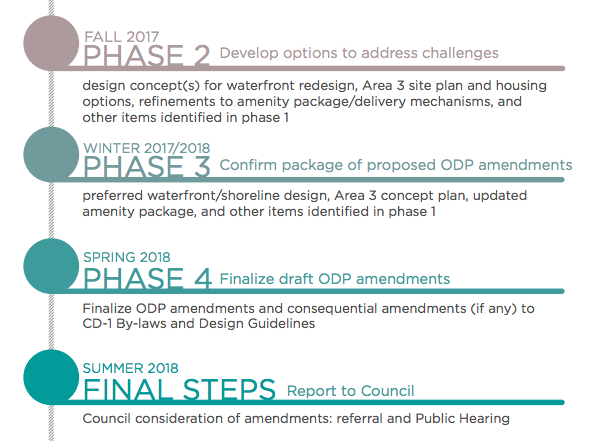 If people wish to provide feedback now, they can email [email protected], or sign up for email updates where you will be notified of future engagement opportunities (that we’re told are coming very soon!). 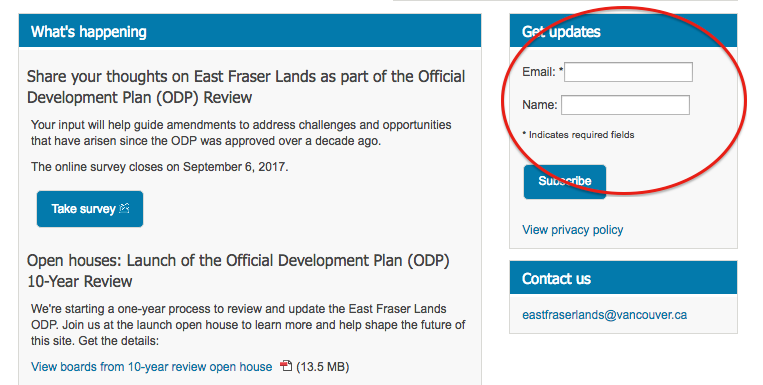