Who pays the bill?
By Ryan Vandecasteyen
The holidays are a wonderful time, but they also hit the wallet hard. So I hesitated the other night when, after dinner with a friend, he asked if we should split the bill. It was the decent thing to do, but… I wasn’t sure it was fair. He had the filet mignon and I only had a tomato soup.

We don’t think the same way about big public services though. This is because things like healthcare and K-12 education are funded through the taxes we pay, which are mostly deducted from our paycheques or added to that dinner bill. That is to say, they are costs that aren’t as visible in our daily lives.

But they cost us a heck of a lot, and will run us even more in the future. Let’s put it in perspective.

According to Statistics Canada, the average Canadian household spends just over $2,000 per year in restaurants. They spend another $900 going to the movies and on other entertainment, and $400 more at home on the cable bill and Netflix. They even spend $1,200 on alcohol and cigarettes.

All these mostly discretionary expenses are dwarfed by what we pay in taxes for our public services. For instance, the average household has $12,000 in income taxes deducted before their paycheques are even cashed.

This isn’t a bad thing. We generally get pretty good value for government spending. The point though is that, if this is where so much of our earnings are going, we should probably be paying closer attention to what they’re paying for.

This is especially important because the cost of public services will grow rapidly.

We already spend $145 billion a year on public healthcare services alone, or over $4,000 per person. A recent report by the CD Howe Institute assessed, based on present projections, how much more we’ll have to pay in the future. What they found was pretty darn depressing: filling the gap between what we pay in taxes and what we’ll have to pay will cost every Canadian $125,000 over the next 50 years.

This burden won't be shared equally. The population is aging, and a growing number of people will be retiring and using larger amounts of public services.  This chart that shows health costs by age paints a pretty clear picture. 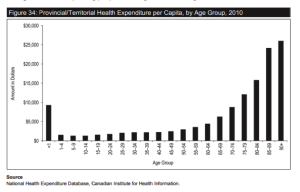 In short, more demand for services; fewer working people (us!) to pay for them. You see where this is going.

As crumbling bridges and inadequate transit systems hint at, we’ve also been underinvesting in infrastructure. Replacing and renewing it will be expensive. The Federation of Canadian Municipalities recently pegged the cost for just road and water infrastructure at $170 billion - or another $5,000 per Canadian.

This doesn’t even include the bills that have already been racked up. Canada’s national debt stands at about $17,000 per Canadian, and provincial and local government debts add to this bill.

It would be one thing if this debt were rising because we were borrowing to invest for tomorrow. But much of the debt our governments are taking on is paying for services being used today. This is like paying your rent, groceries and cable bill on your credit card, but only making the minimum payments. Again, you see where this is going.

Nobody wants to deprive their parents or grandparents of anything, especially the healthcare, retirement benefits and other services they’re expecting. But should we bear the burden for their debts, their underinvestment, and their lack of financial planning for their costly elder years? Put another way, is it fair if we have to pay more for other generations while expecting less for ourselves down the road?

There are ways to plan ahead for some of this. For instance, we can pre-pay some of the expensive things that we know people need when they get old. We do this already with our CPP pensions. We could do the same with prescription drugs or old age health services.

Still, we also have to confront the bigger issue. As with our personal finances, societies that spend more than they’re willing to pay eventually face a reckoning. For example, see here or here.

The bottom line is this: over our lifetimes, we're going to be spending way more on these huge but less visible government services than we will be on our dinner bills. We need to have an open and honest debate, across the generations, about what we pay for and how we share the costs fairly.

The holidays are expensive enough. I don't want to pay for steak when I'm only getting soup.